Why are shadows more defined the closer you move the object to the surface the shadow forms on?

For example, if you're in a room with a light bulb on the ceiling, the closer your hand is to the wall, the more defined the shadow of your hand will be.

There are two factors that cause a shadow to have blurred edges which get sharper the shorter the distance between the object causing it and the surface upon which it falls.

One factor is diffraction, which causes light to spread when it passes an edge.

The other factor, which will be the dominant one with typical light sources in the home, is that the light does not emanate from a point but from a wider area- for example, a regular incandescent bulb might be a couple of inches in diameter. That means that there will be an area around the edge of the shadow in which the object has blocked the light from one side of the source but not from the other. That area is known as the pen-umbra, while the darker central part of a shadow, where the object blocks light from across the full width of the source, is known as the umbra. The pen-umbra is a angular distribution of gradually fading intensity, so the nearer the object is to the surface the less opportunity there is for the pen-umbra to spread.

Here's another perspective (literally) that may be easier to understand than Marco Ocram's answer.

Imagine you're tiny, or everything else is huge, and you put the pupil of your eye just in front of the shadowed surface, looking in the direction of the light source. The total amount of light that you see with that eye (averaged over your field of view) is roughly proportional to how bright that pupil-sized part of the surface was before you got in front of it.

The umbra is the part of the surface where, if your eye were there, you would see the shadow-casting object completely blocking the light source. The penumbra is the part where you would see it partially blocking the light source. The whole umbra is roughly the same darkness, while the darkness of the penumbra varies with distance from the umbra, since the disc of the light bulb is exposed gradually as your eye moves away from the umbra.

Reflection: light reflects off surfaces. If you are far away from the wall, light can still arrive at the wall by reflecting off other walls. Therefore your shadow is both 1) not as dark and 2) relatively indistinct. If you are close to it, then much of this reflected light is blocked, and you get a sharper shadow.

Take away the affects of a penumbra or rough surface and you still see blurring at the shadows edge. This is caused by diffraction from the edge. A single edge Diffraction pattern is unique where the bright and dark fridges get closer and closer together the farther out they go. This can be mathematically calculated and looks like this. 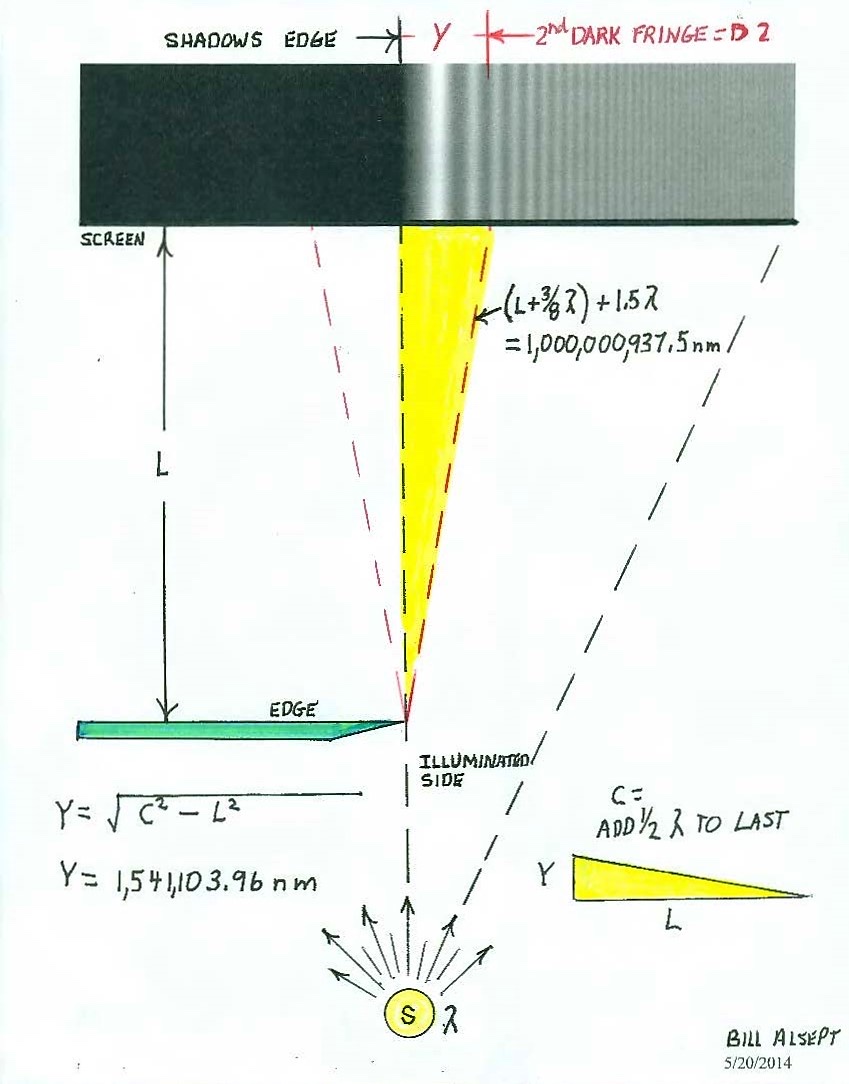 I talk about this in my paper “Single Edge Certainty” at billalsept.com

This is due to the diffraction (not reflection) of lightwaves at the edges of your hand. Diffraction is the spreading of waves eg. from an edge. The refracted wave spread out as it pass your hand, and the smearing of your hand is therefore bigger when the light travels a long distance after your hand.

Not the answer you're looking for? Browse other questions tagged optics visible-light diffraction shadow or ask your own question.

2
Why are shadows sharp close to the object, but blurry farther?

3
Why does a white object lit by a blue light cast an orange shadow?
172
Why do shadows from the sun join each other when near enough?
3
Does this shadow diffraction effect have a name?
0
I have a question about color and light
1
Horizontals in a grid do not cast shadow while verticals do. Why is this?
0
Why does the shadow(formed at the bottom surface of beaker) of thumb disappear when it is at the interface of air and water?
2
Why are shadows sharp close to the object, but blurry farther?
1
Is the shadow cast by an object hit by sunlight a sharply defined shape?