How does a yellow colour filter work in the sense of RGB colour model?

Let us consider the following image: 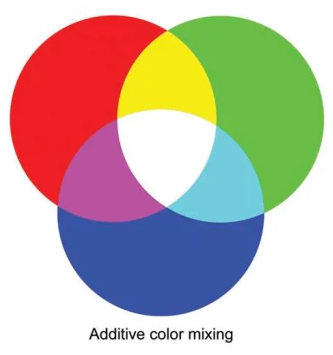 I had pondered essentially the same question for a long time until I figured it out. And here's the disclaimer, I figured it out myself, so there is a chance that I'm actually wrong, but then someone can come and correct me or write a better answer!

The thing is that you have to differentiate between the color of the actual electromagnetic radiation and the color a human eye sees. The waves have a continuum of frequencies they may have. When they hit the eye, however, they are basically converted to the three values (RGB) that are usually said to make up all the colors (because to my understanding there are three different kinds of cells in our eyes perceiving the colors). So the difference is, the human eye might not be able to differentiate the mix of blue and red from the actual electromagnetic wave with the violet color, because the response in the cells in the eye is similar. This does not indicate necessarily that the waves are similar, and hence we can physically differentiate between the two kinds of radiation and, for example, make a filter transmitting only violet light.

On the other hand, this also means, that such a filter does not transmit all light a human eye perceives as violet, if it is, for example, created by using an rgb-led.

14
What is Gray, from a physics POV?
11
How do color filters placed in front of a light source,change the color of light that passes through?

1
Does Bayer demosaicing from RGB-filter sensors work *because* the color filters are imprecise?
66
How does light combine to make new colours?
10
Why does the additive color model use red, green and blue instead of yellow, green and violet?
0
Wouldn’t a truly yellow object appear black in a picture?
3
How does the cyan-magenta-yellow-key (CMYK) model work with printers?
1
Why does the red spectrum seems too be way larger than the yellow spectrum?
2
What would a super bright red look like?
0
How does RGB really work with subpixels?