To give context, till that point he'd explained that a uniform gravitational field can be simulated or is equivalent to going to another coordinate frame that's accelerating (constant accelaration in the opposite direction) irrespective of the position.

He then moves on to the case of a gravitational field pointing radially inward towards the sun: 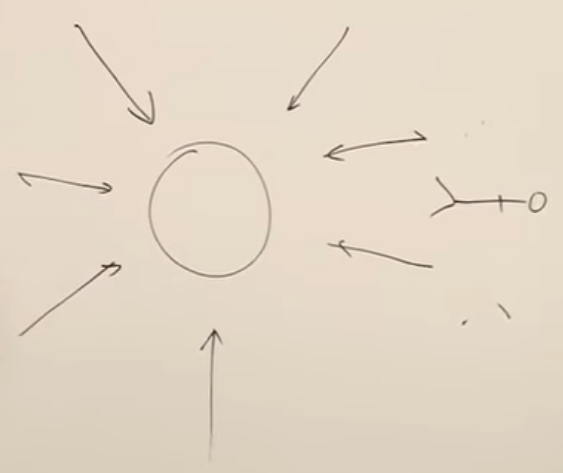 There's a 2000 ft man who's falling legs first towards the sun. He'll feel a stretch since the force on legs is greater than that on his head. The claim is that no coordinate transformation can simulate this effect.

As an example, let's say the person was in the middle of a giant, hollowed-out cylinder (oriented along the cylinder axis). Then he'd feel a radially outward pulling force on his body. If we try to simulate this with the person in the vacuum elevator, no matter what translations we do (zero/non-zero, constant/non-constant accelaration), we can't replicate the radially outward pulling. But now I come to know of this very new kind of motion called rotation, and realize that if the elevator is rotated about its vertical axis, the person inside will feel the same as when he was in the cylinder.

So to reiterate (and I'm certain that I'm missing something) why do we say so surely that the radially inward example (where the person gets stretched) can't be replicated by a vacuum elevator?

Warning: this is a mathematical answer.

We know that it's not possible to make tidal forces disappear because mathematically they are governed by the Riemann curvature tensor, which is (in a way) independent of the coordinates.

In more detail: say we have an observer with four-velocity $U^\mu$. If two points (say, the observer's head and feet) are separated by a vector $\xi^\mu$, they will feel a tidal acceleration given by

Essentially, this says that the tidal acceleration (or relative acceleration) is a linear function of the observer's four-velocity (which isn't really important here, we can treat it as fixed) and the separation. The linear function connecting them is $R$, the Riemann curvature tensor. And the thing about tensors is that if they are zero in one coordinate system, they are zero in all of them. So a non-zero $R$ can't be an artifact of the coordinates; you can't make it go away with a transformation.

In contrast, the acceleration (just acceleration, not relative) of something moving in free fall is given by

And the $\Gamma^\mu{}_{\nu\rho}$, which are known as the Christoffel symbols, do not form a tensor, even though the expressions look similar. So it's possible to make the gravitational acceleration (which is proportional to $\Gamma$) equal to zero by choosing the coordinate system appropriately.

Not the answer you're looking for? Browse other questions tagged general-relativity coordinate-systems curvature equivalence-principle tidal-effect or ask your own question.