Follow up question of "Why does atmospheric pressure acts on us?"

This question is a follow up question of this one. .

I saw the answer by user Thomas Fritsch and he says

In this answer by user Lacek (s)he says:

Pressure is the consequence of gas particle colliding with the walls of the container, or in this case with you. Gas particles are encouraged to collide with you by other particles that do not have direct contact with you.

The pressure is impulse the air molecules give you in collision on unit area and therefore depends on their speed and density. For simplicity, i will consider only density (this would mean that air column has everywhere the same temperature. This is not true for our atmosphere, but such scenario could be achieved in a lab).

Because of gravitation, the molecules of air are trying to get as close to the ground as possible - and the more of them there are, the more collisions with you will happen and the bigger the pressure.

The individual molecules that are colliding with you have no idea what happens above them. But the density of molecules on the ground, depends on how dense are the layers above - considering the balance was created.

Also, you misinterpreted the formula for pressure. Imagine column of molecules of same type with mass $m$, all going right with the same velocity $v$, where they hit wall and return back with same velocity. The pressure for this situation is this: $$P=\frac{F}{S}=\frac{N\Delta p}{S\Delta t}=\frac{2Nmv}{S\Delta t}$$ where $S$ is the area of the wall that is being hit, the $\Delta p$ is momentum change of individual molecule, and N is amount of molecules that hit the area $S$ in time $\Delta t$. How many is this? Well, since we assume constant density, there is $N_V$ molecules in volume $V$ of the column. This column moved to the right with velocity $v$ so the volume of the column that "moved through the wall" in the time $\Delta t$ is $V=Sv\Delta t$. From this you get the formula: $$P=\frac{2N_Vmv^2}{V}$$. But since the air is not column of moleculs moving to the right and molecules have random directions you need to average them (that is, divide by 6 directions). Then you also need to average velocities and you will get your formula: $$P=\frac{N_Vm\bar{v}^2}{3V}$$

But how did you get the volume? You got it in the process of trying to eliminate counting the number of molecules hitting the wall using time interval and area of the wall. Instead you used the fact that density is constant and rewritten the equation in such a way, that eliminates the information about some random time interval and area of the wall. But, the formula in this form is not general, because the volume is used to count the number of molecules hitting the wall, not to count all the molecules in the gass. So the formula cannot be used in a way you are trying to use it. It can be used if you have gass in some jar, where there is constant density of the gass everywhere. Then it is useful, because you can directly manipulate the volume, but you cannot directly manipulate the density. And since amount of molecules is the same (unless the jar is opened) it is more useful having $N/V$ in the formula instead of number density, which would be more appropriate from theoretical standpoint.

Please read up on pressure here, and how it is derived in the kinetic theory of gases here , third page. 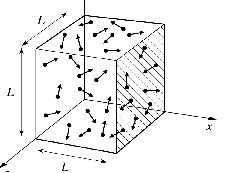 This illustrates the motion of molecules in a gas in a closed container, the kinetic energy of all those molecules impinging on the walls and bouncing off each other and back scattering gives the pressure on the walls for the given temperature and density. Note that no external forces are imposed in this picture.

So pressure in a container , ignoring external forces, is due to the zillions of small impacts of the molecules in the gas constrained in a box.

If external forces are imposed, as gravity is an external force to this volume, a bias is introduced giving a preferred direction to pressure, which will layer the density of gas.

pressure is inversely proportional to the volume this means that due to large volume of air above our head lesser pressure is applied on us. Is this conclusion correct?

The formula is modified when a gravitational force is applicable, see here.:

How do the gas particles are "encouraged" to collide with me by other particles that do not have direct contact with me?

The word "encouraged" is anthropomorphic, the statistical directions of the molecules impinging on each other transfer energy with each other and finally with you, if you are in the box. In the open atmosphere, the same happens at the lowest level where the pressure is highest and where we live. The molecules impinging on you have the kinetic energy given by heat and the level of gravitation, where the existence of a column of gas up to the stratosphere statistically increases the pressure at your level. It is the bouncing off each other that transfers a force on you , at the level where you live.

18
Why does atmospheric pressure act on us?

8
Why does the air pressure at the surface of the earth exactly equal the weight of the entire air column above it
3
How does the bulk modulus of air change with rising pressure?
4
Atmospheric Pressure inside a closed room
1
Is Atmospheric Pressure due to weight of air or the collisions of the Molecules
2
Does hot air have high pressure, and does compreesed air have high pressure?
4
Why does pressure vary with depth in a fluid at microscopic level?
1
How does the kinetic-molecular theory explain why atmospheric pressure is greater at lower altitudes than at higher altitudes?
1
What do you really mean by fluid pressure?
4
How do you visualize the particles in liquid at a molecular level?