Here is a very simple question about light. As far as I remember from the school program, each color is merely one of the frequencies of light. I also remember that each color's wave length is different. On the other hand, when talking about the speed of light, I've always heard only one value. Why is it so? Shouldn't it be like the red color's speed must be way higher (or lower) than, say, the purple color's speed? I am quite confused here.

(Sorry if my question is too foolish, but it has bugged me for years and I was quite bad at physics at school and have never touched it since I finished school)

The speed of light is always c in vacuum, when measured locally, independent of the wavelength.

Though, in a medium, the index of refraction is n=c/v.

Speed of different em radiation in a medium

Now if the index depends on the wavelength, then different wavelength (color) light has to have different speeds in the medium.

So the answer to your question is, that in vacuum, the different wavelength light all travel always at speed c when measured locally, but in a medium, the speed of light is dependent on its wavelength.

The speed of a wave is given by:

Where $c$ is the speed of the wave, $f$ is the frequency and $\lambda$ is the wavelength. You're right that different colours have different frequencies, but light with a lower frequency has a longer wavelength, in other words if $\lambda$ goes up then $f$ has to come down so they cancel each other out and the speed stays constant.

Imagine that you have a great big loudspeaker on top of a mountain, with a switch that makes the loudspeaker cone jump into one of two positions. When you flick the switch down, the cone jumps forwards and sends out a positive pulse, and when you flick it up, the cone jumps back again and sends out a negative pulse. The speed at which your standard pulses move through the air depends on things like air temperature and density.

Sound travels at about 300 metres per second. Two pulses makes a wavecycle. If you change the switch position once every ten minutes, you have a squarewave signal with a 1/300hz frequency. If you flick it once a second you have a signal with a 1/2 Hz frequency. There's no obvious reason why the individual pulses would move at a different speed just because there's another pulse behind them or ahead of them maybe a kilometre away. The pulse speed doesn't care whether you flick the switch once a minute, once a month, or once a year.

So there's a range in which the signal speed is independent of the frequency.

Frequency only really starts to become an issue if the frequency is high enough and the wavelength small enough to interfere with some scale of structure in the medium, or if the waves are close enough to each other to start interacting, or if the energy transmitted is great enough to start altering the properties of the medium (like, your soundwaves start heating up the air).

For light in a vacuum, you're only supposed to start getting frequency-dependencies if the frequencies are so absurdly high (like, ultra-ultra-hard gamma rays) that the energies start distorting spacetime and/or creating particles so that you no longer have a vacuum. But even if that starts happening, it's going to tend to affect all frequencies.

No, they are related by the formula

with speed of light in vacuum $c_0$, frequency $f$ and wavelength $\lambda$.

A change in frequency demands an anti proportional change in wavelength and vice versa, since the speed is constant. It is not possible to change the frequency and leave the wavelength constant.

This is quite intuitive because the frequency is the timescale how often a wave peak will pass in a given time. But of course this depends on the wavelength: 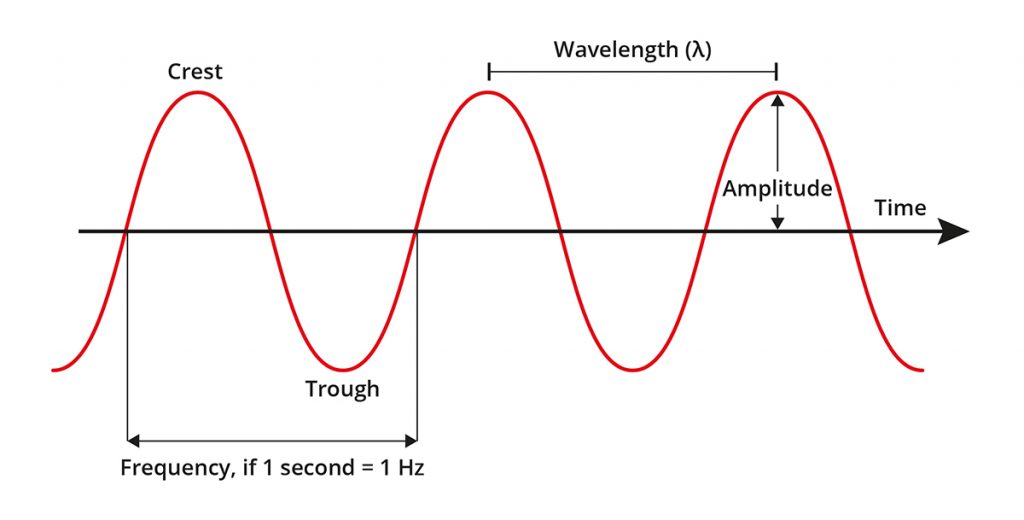 The speed of light is completely independent of the wavelength, provided the medium is vacuum or air.

But In other medium, like water or glass the speed Of light of different wavelengths decrease differently. This phenomenon is known as Dispersion Of Light

In a medium the Speed Of red light is maximum and that of violet is minimum.

This is how we see the colours of the rainbow.

Not the answer you're looking for? Browse other questions tagged visible-light electromagnetic-radiation speed-of-light refraction dispersion or ask your own question.

48
Why do prisms work (why is refraction frequency dependent)?
2
Why does the speed of the Electromagnetic wave in the material depend on the frequency of the wave where as they are constant in vacuum (freespace)?
2
Speed of different em radiation in a medium

25
Accelerating particles to speeds infinitesimally close to the speed of light?
2
How to improve the visibility of light without increasing the brightness?
1
Frequency dependence of the speed of light in air
3
Order of colors after reflection in a raindrop
0
How is light produced?
0
On contraction, aberration and redshift of light from a mirror for an observer who remains still