Why do we use cross products in physics?

We can define cross products mathematically like if we take two vectors, we can find another vector with certain properties but why do we use it in physics, if we consider a hypothetical physical quantity like force which is equal to cross product of certain vectors?

For example, the force exerted on a charge in motion in an uniform magnetic field.

Why is it so? Why does that force have to be a cross product of two vectors?

Is it possible to come up with them when what we do is just observe the nature?

This is a great question. The dot and cross products seem very mysterious when they are first introduced to a new student. For example, why does the scalar (dot) product have a cosine in it and the vector (cross) product have a sine, rather than vice versa? And why do these same two very non-obvious ways of "multiplying" vectors together arise in so many different contexts?

The fundamental answer (which unfortunately may not be very accessible if you're a new student) is that there are only two algebraically independent tensors that are invariant under arbitrary rotations in $n$ dimensions (we say that they are "$\mathrm{SO}(n)$ invariant"). These are the Kronecker delta $\delta_{ij}$ and the Levi-Civita symbol $\epsilon_{ijk \cdots}$. Contracting two vectors with these symbols yields the dot and cross products, respectively (the latter only works in three dimensions). Since the laws of physics appear to be isotropic (i.e. rotationally invariant), it makes sense that any physically useful method for combining physical quantities like vectors together should be isotropic as well. The dot and cross products turn out to be the only two possible multilinear options.

(Why multilinear maps are so useful in physics is an even deeper and more fundamental question, but which answers to that question are satisfying is probably inherently a matter of opinion.)

I am focusing on the geometry of cross products

Cross products are used when we are interested in the moment arm of a quantity. That is the minimum distance of a point to a line in space.

It's really much simpler than the other answers so far have made it out to be. We use the cross and dot products (and all the other math) because they allow us to create fairly simple mathematical models (that is, the laws of physics) that accurately represent what the universe actually does.

Both axial and polar vectors are what mathematicians would consider a vector. Both are a set of 3 coordinates. They are often drawn as arrows. They can be added together and multiplied by numbers like arrows.

Physicists require something more to consider a quantity to be a vector. They must represent a physical quantity that transforms in the right way when you change the basis.

Polar vectors represent quantities like distance, velocity, acceleration, and force. These can describe motion of a point particle with a magnitude and direction.

Axial vectors represent a different set of quantities, like angular velocity and angular momentum. These describe things like rotary motion in a plane. They are a magnitude and orientation of the plane. This is equivalent to motion around an axis. They are often represented by an arrow, where the arrow is parallel to the axis and perpendicular to the plane. Plane orientation include the idea of clockwise vs counter clockwise. This is represented by putting the arrow on one side or the other of the plane as dictated by the right hand rule.

Another good way to do this, is to give the plane in which I'm rotating, which I can represent by two perpendicular lines in $\mathbb{R}^{3}$ and a magnitude (representing the angle), which is again a number in $\mathbb{R}$. I encode these things by picking two vectors $v,w \in \mathbb{R}^{3}$, and say that the magnitude is encoded by the product of the lengths $\|v \| \|w\|$. This means that lots of different pairs of $v,w \in \mathbb{R}^{3}$ give the same rotation, but that's ok. (I can even allow more different pairs, by not assuming that $v$ and $w$ are perpendicular, but then I have to replace their product by the area of the parallelograms spanned by them.)

Now, why this turns up in physics doesn't have such a clear cut answer, except that both these two different ways of representing rotations have their uses. For instance, in your example talking about a charge moving in an electric field, I would say that this is just a fact of nature that was established experimentally.

An interesting aside is that rotations can be composed, i.e., given two rotations I can first do one and then the other to get a third rotation. It might be interesting to try to figure out how this works in either of the pictures I have given above.

I'm not sure how advanced you are mathematically, so it's hard to know how much to add, verbally. Besides, I'm posting from a tablet, so typing is cumbersome.

There is no single answer, but the cross product involves some kind of rotation about an axis. Whether that is a physical rotation, or a mathematical displacements depends on the circumstance.

One place where the cross product is fairly easy to understand is in the relationship between angular momentum, rotational kinnetic energy, and torque.

Let me know if you can follow the math, based on the diagram. I'm talking about the dervations in the boxes. The stuff below that is incomplete. 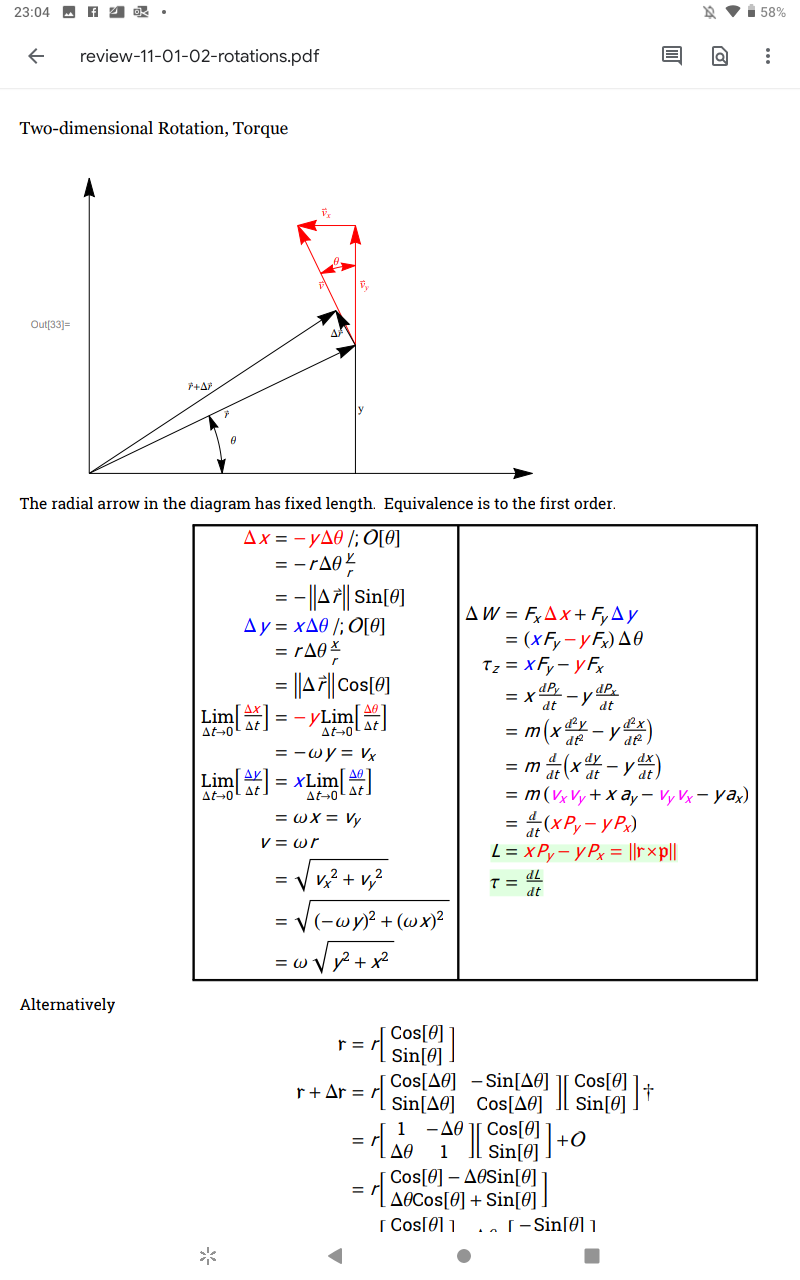 Not the answer you're looking for? Browse other questions tagged vectors geometry or ask your own question.

3
Why is the direction of cross products of two vectors perpendicular to the plane?
12
Torque direction meaning
3
Can someone provide an intuitive relation between linear and angular velocity?
2
Why do we use the whole radius vector in the angular momentum, and not just the unit vector?
3
In Circular motion, why $v = \omega × r$?
4
Definition of vector cross product
2
Why the cross product of two vectors gives a vector in an orthogonal direction?
2
Why is the $B$-Field an axial Vector?
2
What are the proper definitions of moment, couple, torque, 'moment of force'?
0
Definition of angular momentum about an axis and conservation of the angular momentum about the axis
See more linked questions

75
What is the physical significance of dot & cross product of vectors? Why is division not defined for vectors?
0
Why or how is cross product used?
2
Can we get area vector of any flat shape using the cross product?
0
Can we replace our use of cross products with the BAC-CAB rule?
3
How do we Know Something is a Cross Product?