Will the mirror reflection make the interference pattern disappear?

Now, even giving a precise statement of what makes a "measurement" is non trivial, but a starting place is that a measurement leaves a record. Coherent reflection form a mirror generally does not leave a record.

Why is quantum entanglement considered to be an active link between particles?

But this step, in which the original overall probabilities for the second particle were replaced by the conditional probabilities that take the known outcome involving the first particle into account, is just a change of our knowledge - not a remote influence of one particle on the other.

Why can interaction with a macroscopic apparatus, such as a Stern-Gerlach machine, sometimes not cause a measurement?

a superposition is destroyed/decohered when information has leaked out. In this setting that would mean that if by measuring, say, the momentum of the Stern-Gerlach machine you could figure out whether the spin had curved upwards or downwards, then the quantum superposition between up and down would have been destroyed.

Now this is in contradiction with radiation pressure, and the way solar sails work. The mirror gets a recoil from the reflecting (elastically scattered) photons, and that is detectable, measurable, because it is a change in the mirror's (sail) momentum vector.

Radiation pressure is the pressure exerted upon any surface due to the exchange of momentum between the object and the electromagnetic field. This includes the momentum of light or electromagnetic radiation of any wavelength which is absorbed, reflected, or otherwise emitted (e.g. black-body radiation) by matter on any scale (from macroscopic objects to dust particles to gas molecules).1[2][3]

Do photons attenuate when they reflect? 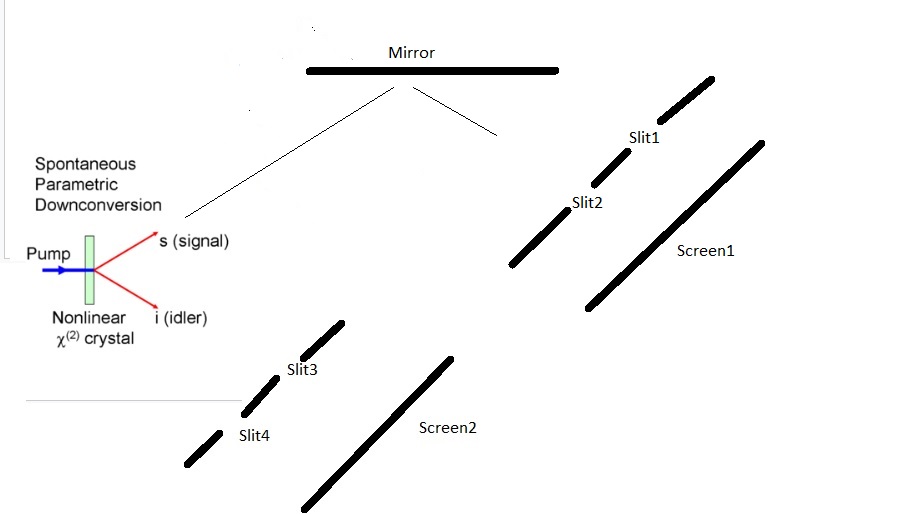 Thus it has to collapse the wavefunction. The signal photon goes to the mirror, reflects and goes through slit 1 and 2 and goes to screen1. The idler goes directly to slit3 and 4 and to screen2. The two photons in this case have a common wavefunction (entangled), and in this case I will either:

Let's complicate your experiment a little bit. Run photon s through a beamsplitter so that it can follow either of two paths to the mirror, and make the beam(s) narrow enough that one of the paths can only be reflected to slit 1 and the other can only be reflected to slit 2. Path s1 hits one half of the mirror and path s2 hits the other half of the mirror. Now, reflection of a photon on path s1 will give the mirror a clockwise torque and reflection on path s2 will give the mirror a counter-clockwise torque. The wavefunction will presumably take both paths, but the mirror's recoil can be used to accurately predict which slit the photon goes through. Will there be an interference pattern formed on screen 1? The answer in this case is "NO", because the mirror's recoil (clockwise or counter-clockwise) will constitute a measurement of which slit the photon passed through.

Not the answer you're looking for? Browse other questions tagged quantum-mechanics photons reflection double-slit-experiment or ask your own question.

110
Why is quantum entanglement considered to be an active link between particles?
34
Why can interaction with a macroscopic apparatus, such as a Stern-Gerlach machine, sometimes not cause a measurement?
11
When light reflects off a mirror, does the wave function collapse?
0
Do photons attenuate when they reflect?