Some confusions about Torricelli's law

So actually I have some confusions about Torricelli's law. 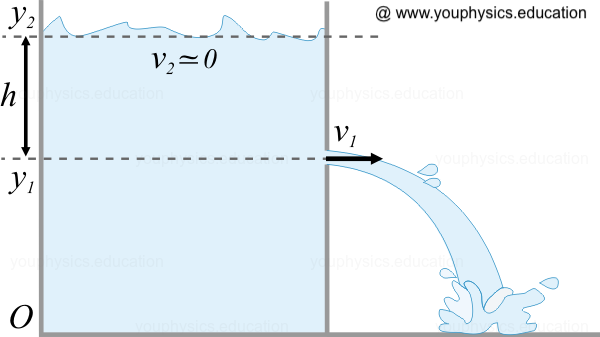 Based on the picture:

If you consider a streamline starting from a point 1 at the top part of the container, there is the pressure $p_1$, which corresponds to the ambient pressure and a velocity that results from the surface moving downwards $u_1$ as water is pouring out. At the point 2, the hole in the container, the potential energy has been converted to kinetic energy and the pressure corresponds to the ambient pressure of the surrounding fluid:

Assuming the change in pressure in the surrounding fluid can be neglected (of course if the outside was water as well then the velocity would clearly be zero as the ambient pressure would change with height as well) $p_1$ and $p_2$ can be assumed equal $p_1 \approx p_2$.

Furthermore we can consider the 1D continuity equation

1) As you can see there is no pressure term as you follow a particle from the top of the surface to the exit and on both sides there is assumed the same ambient pressure. If it would be a closed pressurised container you would end up with $u_2 \approx \sqrt{2gh + 2 \frac{(p_1 - p_2)}{\rho} }$ and there would be indeed a contribution from the higher pressure inside the tank.

2) Clearly the derivation of this idealised law is based on the assumption of a small hole but as long as one can still neglect the velocity at the top of the container $u_1 \approx 0$ the outcome would still be the same and not depend on the area. This is a result of mass continuity.

Not the answer you're looking for? Browse other questions tagged fluid-dynamics flow bernoulli-equation or ask your own question.