I have currently been introduced to relativity of simultaneity with the following thought experiment:

Q: Now consider that there is a bomb in the middle of the train and that bomb would blow up if the two presidents don't sign the agreement simultaneously and won't blow up if they do (this can be achieved via sensors added at the back and front of the train). Now this experiment is carried and from " platform frame" train blew up while in "train frame" train didn't blow up. Now this poses a paradox as the train can't blow up and not blow up in the same time even if its a matter of reference frames, since reality is connected. How can this paradox be resolved?

Moreover from this paradox I get the feeling that, even though observers in different inertial reference frames don't agree on simultaneity, they must agree on something, maybe cause of their action on nature around them? I don't know how to call this agreement. Because if they wouldn't agree on this (idk how to put it into words) then we would get paradoxes as the one above. Thank you for any help

ps: The though experiment with the presidents was presented by Brian Greene in his course on special relativity 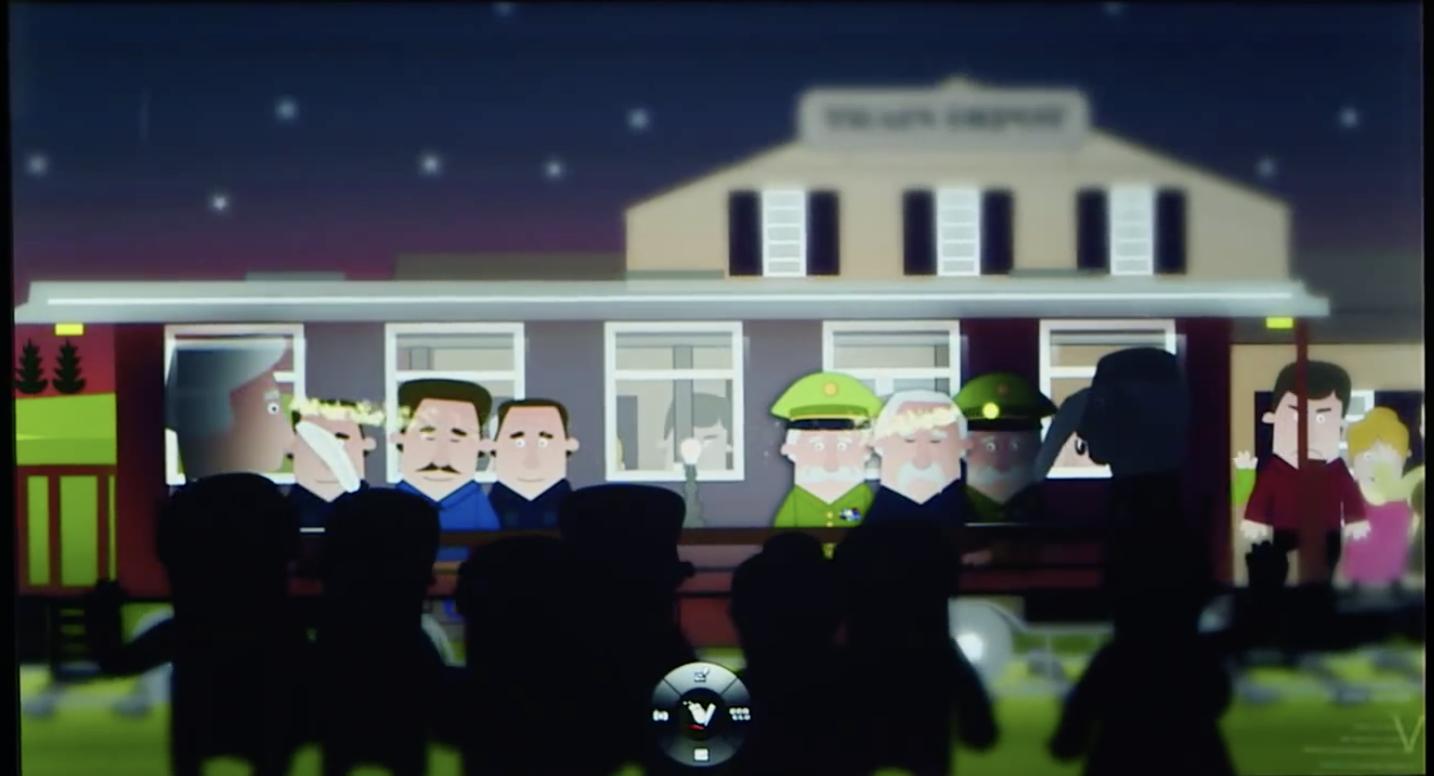 The real problem is that the trigger on the bomb is ill specified. It's not as complete as you might think. The entire point of these simultaneity exercises is to demonstrate that simultaneity is not preserved between frames of reference. It's an odd artifact of relativity, and that's why it needs thought experiments like these.

Thus, a physical bomb cannot blow up "if the presidents do not sign simultaneously," because simultaneity is specific to the reference frame one is talking about. The most natural answer is "in the reference frame within which it is at rest." That would be the only meaningful natural assumption.

Both the train bomb which blows up if the presidents do not sign simultaneously and the bus bomb that blows up if the bus dips below 55mph are incompletely defined scenarios because the triggers do not specify the reference frame. In the case of the bus bomb, we will intuitively translate this as 55mph "in the ground frame," and that intuition fills the gap.

Here's an even more alarming paradox: I'm about to flip a coin. Next to me there is a bomb with two properties:

1) The bomb blows up if and only if the coin comes up heads.

2) The bomb blows up if and only if the coin comes up tails.

Whoa! The bomb either has to blow up or it doesn't, and either way we have a paradox, right?

What is the solution to this paradox? It is that there is no such bomb.

What you seem to have imagined is a bomb with these two properties:

1) The bomb is defused if and only if the signings are simultaneous in the train frame.

2) The bomb is defused if and only if the signing are simultaneous in the station frame.

If the bomb, the laser, the sensors, and the presidents are all in the same frame of reference, it will not matter what other frames of references see the laser do.

There is no paradox. The question you pose is exactly analogous to this:

Two presidents must sign a treaty at 6pm or a bomb will go off. They sign it at 6PM London time, so the bomb doesn't go off. But in New York it appears that they have signed it at 1PM, so the bomb does go off. How can this be?

The answer lies in the question itself. The bomb does not explode because the simultaneity is considered only from the reference of the train. This is similar to the limo in the garage question in Leonard Susskind's Theoretical Minimum:Special Relativity. What I mean is that the bomb explodes only if the two light beams don't reach to the detector at the same time, the notion of time in special relativity is not the same as classical mechanics, what time is measured by someone might not be the same as measured by other, so in this case we must consider the proper time, which here is in the reference frame of the train, so the bomb doesn't explode from both reference frames even though the flashlight don't reach simultaneously to the ends with respect to the ground frame. In case you don't understand this explanation, you can refer to the above stated book.

It's not enough to say that the bomb will blow up if the two presidents don't sign the agreement simultaneously. You have to define how the bomb will decide whether or not the signing is reckoned to be simultaneous or not. How is it wired? It is wired to compensate for time delays? If so, are the supposed time delays calculated by assuming that the speed of light is fixed for the railway carriage or for the platform? Or for some other arbitrary state of motion?

You can imagine the bomb having a switch with two settings, which either put it into a mode where it compensates for assumed simultaneity by assuming fixed c in the train, or on the platform. That physical switch setting then decides the outcome.

So there's no paradox. The outcome is deterministic, but it depends on an arbitrary choice by a human being as to how to physically wire the bomb, or which switch setting to use. The bomb does not have the magical ability to compensate simultaneously for an infinite continuous range of possible beliefs about which frame lightspeed is "really" fixed in. Once you make a decision about which (arbitrary) belief to use, and set the trigger system accordingly, you have your outcome.

Not the answer you're looking for? Browse other questions tagged special-relativity speed-of-light speed thought-experiment or ask your own question.