Around the middle of the box, but outside the box, a star explodes. Alice and Bob agree to both check if the particle is on their side of the box when they see the star explode.

If Alice sees the particle on her side, we would expect Bob to not see it on his side, but the problem with this is that wave function would have to collapse instantly over all space in the box. In other words, it's non-local.

If the wave function were to collapse locally over time, it would start where Alice observed it, and information about the collapse would propagate at the speed of light to the other side of the box. But since it takes years to span the box, the probability distribution would still be non-zero probability on Bob's side.

Since it would break conserved quantities, a particle would not be able to be detected on both sides of the box, so it seems like the wave function collapses non-locally.

I think a non-local collapse looks something like the following. 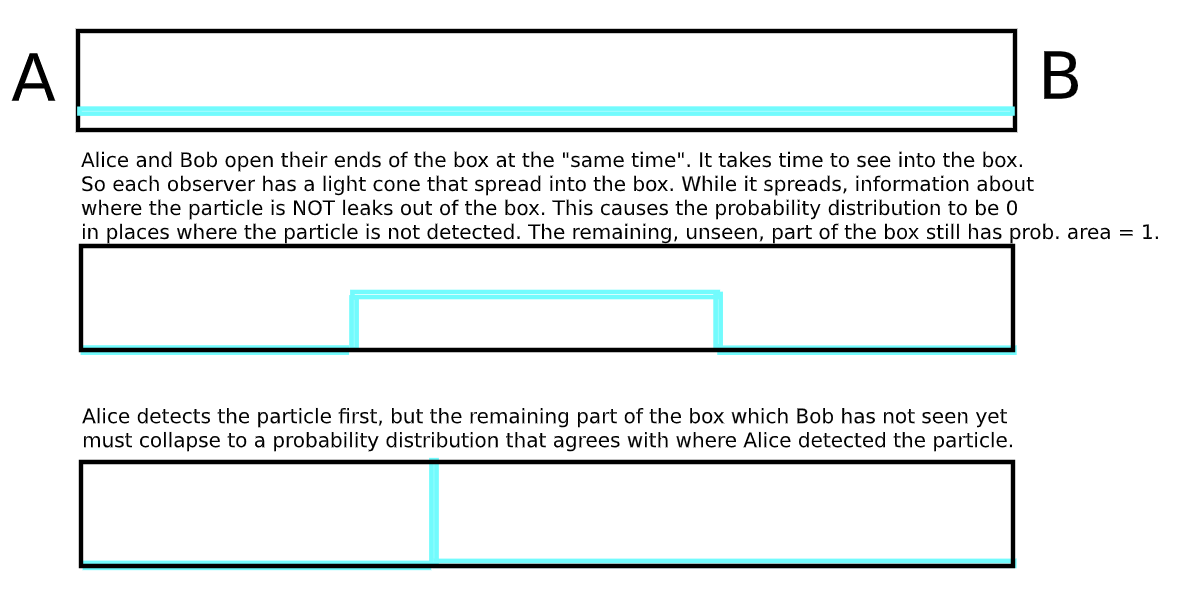 I say it's non-local because the part of the probability distribution closer to Bob's side is changing by Alice's discovery of where the particle is or is not. A positive or negative observation by Alice affects Bob's chances of detecting the particle on his side. This is a non-local cause and effect.

Is this correct? This seems like an experiment that could be done. For example, a long tube has only an electron inside. The detectors Alice and Bob are photon detectors on each end of the tube. Turning on a very strong magnet on each end of the tube is equivalent to Alice and Bob opening the tube and looking inside. If the electron's spin flips in response to the magnetic field, then a photon is detected and may be detected. The time between turning on the magnet and detection of photon tells us where the electron was. If we run the experiment many times (throw away results where no photon is detected because electron spin did not flip or photon did not hit photon detector), will it produce a distribution of detections which is "uniform" (ignoring interference patterns), or will it produce a distribution which is more concentrated as you get further away from the magnetic field source (magnetic field is only on when we want to detect).

I have found this answer: https://physics.stackexchange.com/a/476738/159153 But just like the commenter on that answer, I am left unsatisfied with this story. The reason being, if negative measurement affects state, then I am still wondering how Bob's side of the box seems to be affected instantaneously.

It's non-local in the sense that you said: Bob's wave function must be updated as soon as Alice makes a measurement, by setting $\psi=0$ in Alice's detection region and renormalizing it to 1 everywhere else. Up to changing the phase, this is the ONLY way to change the WF after measurement which doesn't allow faster-than-light communication between Alice and Bob. You can check by insisting that the probability that Bob finds the particle is unchanged whether Alice chooses to look for the particle or not that this is the case.

Physics (including QM) is local in the sense required by special relativity, basically that there is no FTL communication. There are other types of nonlocality like this one which are allowed. How you interpret this physically depends on interpretational questions. But there is an underlying nonlocality of a certain sort in QM.

Edit in response to Croolsby's comment: You said: if Bob's WF is changed when Alice measures the particle, won't he be able to tell by measuring the probability of finding the particle on his end?

Answer: If Alice DOES find the particle, the probability that Bob finds it in his measurement is $0$. This has a detectable effect on the probability on Bob's side. So in order to make up for this, the WF must be scaled up in the case that Alice doesn't find the particle. Balancing these out is the only way that Bob cannot tell what Alice has done. In particular, we need

By splitting the right hand side of this equation into conditional probabilities, conditioned over whether Alice finds or doesn't find the particle, you can see that the only way for the RHS to equal the LHS is: If Alice doesn't find the particle, $\psi$ must be scaled to 0 in Alice's detector and renormalized (scaled up) everywhere else so that its norm is still 1. Up to a phase this is the only consistent way to make both sides of the equation equal.

There are different ways to interpret the wavefunction. You might consider it to be (1) a real, physical entity and in this case its collapse implies a non-local physical process, or (2) you might take it to be a representation of the available, incomplete knowledge about the system, in which case no nonlocality is required as the collapse represents a change of your knowledge about the system, not a change of the system itself.

We have solid evidence that the world is local, so, the most reasonable position is 2. In other words, we know that the particle is in the box, but we do not know where, so the wavefunction is spread inside the volume of the box. After the particle is detected you know where it is and you replace the old wavefunction with the new one, peaked around the detection locus. There is no paradox here.

This is not what QM says. Where did you get this information?

About the "negative" measurements. They change the state because they increase your knowledge about the system. There is also a physical interaction involved there because particles interact by long-range forces (like electric/magnetic fields). So, if you decrease the volume of the box by using a metal barrier and you do not find the particle in one of the two separated volumes you change the fields acting on the particle. The electrons and nuclei in the barrier will produce electric and magnetic fields that will exert a force upon the particle.

"We can find a reference frame where the 2 events, detecting the particle on the main detected, and detecting the entangled particle in one of the other detectors, happens simultaneously. And if the wave function collapses instantly, then there's no paradox in this frame of reference."

If you really want to go for option (1), a real wavefunction that undergoes an instantaneous collapse, you need to reject the modern interpretation of special relativity and go for an absolute reference frame. This is the only way you can avoid paradoxes.

You are asking in the comment "the probability distribution which tells you where the particle might be, and upon measurement, the particle's state collapses to one location."

Now it is very important to understand the difference between two things:

Classically thinking, you would say, it must be 1. The particle might be at different places, with different probabilities, but not at the same time.

Wavefunction collapse is a phrase that is confusing, it just means realizing one piece of the probability distribution.

It is a misunderstanding of this dubious word "collapse", which really means getting one instance from a probability distribution, in your question "wavefunction of the whole universe,", more complicated than the wavefunction for the scattering of two protons, but the principle is the same. One has to look for the effects of this particular point from the probability distributions describing it.

Spontaneous collapse of the universal wavefunction

You only realize this one piece of the probability distribution upon measurement. Until then, the particle traveling as a wave is delocalized.

You are basically asking if we have two detectors at two ends of the box, how will the detector at one end of the box know that the particle was measured on the other end, so it cannot be measured there too.

I actually asked a question about this:

The reason for that is that the two detectors at the two ends of the box are entangled. They have a common wavefunction. It describes the probability of finding the particle at one of the sides (exclusively, only at one side at the same time), that is why you cannot detect the particle at both sides of the box at the same time, and nothing instantaneous (no information) needs to travel between the two ends of the box.

Quantum field theory makes it easy to prove that the information cannot spread over spacelike separations - faster than light. An important fact in this reasoning is that the results of the correlated measurements are still random - we can't force the other particle to be measured "up" or "down" (and transmit information in this way) because we don't have this control even over our own particle (not even in principle: there are no hidden variables, the outcome is genuinely random according to the QM-predicted probabilities).

Why is quantum entanglement considered to be an active link between particles?

This is the kind of thought experiment that leads to the Many Worlds view of QM, in which wave function collapse does not occur. But I think your question highlights an important point: that even the Many Worlds view appears to require nonlocality with respect to propagation of conditional probabilities. Somehow Bob's photon detector "knows" which branch of possible worlds it belongs to.

IMHO, the only really self-consistent interpretation may be a Many Worlds view in which the wave function contains all sets of mutually consistent possibilities. Alice's detection of the photon is inconsistent with Bob's detection of the photon, so the wave function does not contain the possibility that both Alice and Bob detect the photon. Trace all possible interactions throughout the universe back to the Big Bang, and it would turn out that the initial universal wavefunction, contained in an unimaginably tiny volume of spacetime, contains all possible subsequent configurations of the universe as "sets of mutually consistent possibilities". Perhaps simultaneity per se has a different meaning in that tiny context.

Not the answer you're looking for? Browse other questions tagged quantum-mechanics faster-than-light causality wavefunction-collapse or ask your own question.

94
Why is quantum entanglement considered to be an active link between particles?
21
If a photon truly goes through both slits (at the same time), then why can't we detect it at both slits (at the same time)?
5
Wavefunction collapse in relativity
6
Wave function. Measurement of the absence
3
Spontaneous collapse of the universal wavefunction
0
Does quantum entanglement imply a universal “now”?

0
Decoherence, collpse, and WHEN does the collapse occur?
2
Non-locality in non-relativistic Quantum Mechanic
1
If Alice is moving at relatavistic speeds compared to Bob, is collapse still simultaneous?
1
Quantum non-locality with commuting measurements?
7
Does collapse of wave function to a momentum eigenstate violate speed of light restriction?
1
How can quantum entanglement not be non-local?
0
Performing Three Consecutive Measurements in Different Bases on Entangled Particles
1
Wave function collapse violates causality?