What do I see looking forward inside the black hole? [closed]

What happens to light that falls into a black hole?

What would be the view like from inside a black hole looking towards the event horizon?

But I am asking about looking the other direction, forward, towards the singularity.

What do nearby objects look like inside a supermassive black hole?

If you are inside a hole falling feet first you still see your feet. If a pulse of light leaves your feet it hits your head when your head is deeper in the hole than the feet were at the time the pulse was emitted. This is because "future" is toward the center, even for light directed away from the center.

But this is talking about my feet, being behind me physically (falling head-in), and I am talking about things in front of me physically. So basically would I see my feet falling feet-in looking towards my feet (same direction as the singularity).

How does light behave within a black hole's event horizon?

Time paradox inside a black hole

Time and space don't swap places inside a black hole. The point of all this is that the coordinates are not spacetime - they are just labels we attach to spacetime. What happens inside an event horizon is not that time and space swap places but rather that the labels we call Schwarzschild coordinates behave oddly inside a black hole. This is an important distinction.

And I really like what John Rennie is saying. Basically the spatial and temporal dimensions do not swap, the singularity just becomes a point in time (the future itself) instead of a point in space. Now if I am falling inside the black hole, and look forward, towards the singularity, there could be two things I could see:

Now I am for 2. because I do like the answer where it says that I am falling in faster then light (non-local).

G. Smith pointed out in a comment that '“toward the singularity” means looking “toward the future.' A.V.S. suggested a better way of posing the question:

I would suggest editing the question by replacing “looking toward the singularity” simply with “looking forward”. This could be naturally interpreted as observer radially falling toward BH and looking straight at it before crossing the horizon would maintain hers orientation after crossing.

I think this is roughly equivalent to saying that the observer just needs to be able to continue observing photons from the same side of the Penrose diagram. Here is a Penrose diagram for a black hole, showing the relevant features: 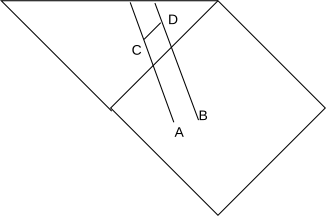 A is the world-line of some infalling matter. B is the world-line of an observer. Before they fell in, B said that A was in the inward direction. A falls in first. I haven't presented any formal arguments involving parallel transport of basis vectors or anything like that, but it seems clear to me that A continues to consider A to be "inward" relative to them.

CD is the world-line of a photon coming from the infalling matter to the observer, after they are both inside the horizon. From this diagram it's clear that the observer can continue to see stuff from the direction that they used to call "inward," but this direction is not "toward the singularity."

For the (unphysical) maximal extension of the Schwarzschild spacetime, the observer will also be able to see the universe on the other side of the Einstein-Rosen bridge, as well as any matter that has infallen from that universe.

If you look at my answer here, I show some simulated images I made of this kind of thing, with a link to a video and the software I wrote. In these images, there is always a black circle. This is the direction that the observer considers "inward" according to A.V.S.'s definition (and the software does parallel-transport the basis vectors). This region is black simply because my code doesn't simulate any light coming from any sources there, but the observer would certainly see photons like CD if such sources were added to the simulation.

We can also see this from the equivalence principle. Local experiments always come out in accordance with SR. When B observes A using photon CD, they're doing a local experiment. It doesn't matter that they're inside a black hole.

Not the answer you're looking for? Browse other questions tagged general-relativity black-holes event-horizon causality singularities or ask your own question.