Is there a reason, other than mass hierarchy, that we associate each quark generation with a particular lepton generation?

Is the reason we do this just because of the relative masses of the particles? Or is there some underlying symmetry between the leptons & quarks that requires us to associate the electron with the up and down quarks? I know you have to have complete electroweak multiplets to cancel out the anomalies, but is there any reason other than mass that we don't pair $e$ and $\nu_e$ with $t$ and $b$?

To put it another way: If all of these particles had the same mass, would there be any reason to "pair off" the lepton and quark generations the way we currently do, or would any pairing of the generations be OK?

This is probably a basic fact that I learned in my QFT classes, about [mumble mumble] years ago, but I seem to have forgotten it if I ever learned it.

There is NO reason, other than mass hierarchy, that we associate each quark generation with a particular lepton generation.

The question in concern is not just an arcane topic for late night bull sessions. Different generation assignments could have tangible consequences. For example, the primary channel of proton decay in the grand unified theories (GUT) is usually "proton to electron/positron and meson", which is actually based on an unfounded assumption of $(e, \nu_e, u, d)$ being in the same generation.

Alternatively if we assume that $(\mu, \nu_\mu, u, d)$ are in the same generation and the GUT quark-lepton flipping gauge fields only interact within the same generation, then protons may be restricted to decay to muon/antimuon instead, which is of course suppressed due to large muon mass. This explains why we haven't observed proton decay yet.

How did the $SU(3)\times SU(2)\times U(1)$ come to be the standard model of particle physics? After years and years of experiments that showed up the quark model, which lead to the standard model. example of symmetries in the data: 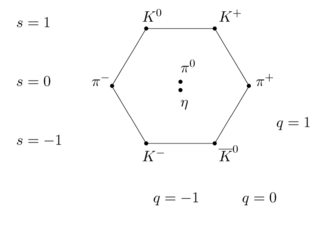 Note that even though the symmetry splits according to charge and strangeness, there is a mass dependence in the plot.These symmetries have to come out in the standard model, which uses the elementary particles in the table . It is validated by all the preexisting data.

To put it another way: If all of these particles had the same mass,

This is the basic hypothesis for the standard model before symmetry breaking, that all the elements entering have zero mass. The Higgs mechanism breaks the symmetry , finally the particles acquire mass. The group structure exists before and after symmetry breaking.

So the answer to the title

Is there a reason, other than mass hierarchy, that we associate each quark generation with a particular lepton generation?

It comes out of the symmetries of the standard model groups, after symmetry breaking and the acquisition of mass. The hierarchy is given by the symmetries of the group structure. That we call electron and down quark the lowest mass items in the group symmetries is because that is what is used in identifying the data to be checked. So it depends on the total representation of the theory.

Not the answer you're looking for? Browse other questions tagged particle-physics quarks elementary-particles leptons or ask your own question.

13
To what extent are lepton and quark generations tied in the Standard Model?
3
Particle physics jargons - generations, family and flavor

17
Origin of lepton/quark generations?
1
Where does the Higgs Boson fit in the three generations of charged particle?
9
Help me understand Lepton universality
13
To what extent are lepton and quark generations tied in the Standard Model?
3
Decay width of the tau lepton
2
Why is usual matter made up of $n,p$ and $e^-$?
2
PMNS matrix versus CKM matrix -- how precise is the analogy?