Does the J/$\Psi$ primarily decay into real gluons?

so apparently the this cool looking decay of the $J/\Psi$ particle is OZI suppressed, which was confusing to me, because the Particle Data Group (link) says that 64% of its decays are into 3 gluons (as does wikipedia). So my question is, do I misunderstand what the PDG is saying, or does it emit 3 real gluons which don't decay into hadrons? Don't gluons have a finite lifetime because they're not white? Any help would be appreciated, thanks. 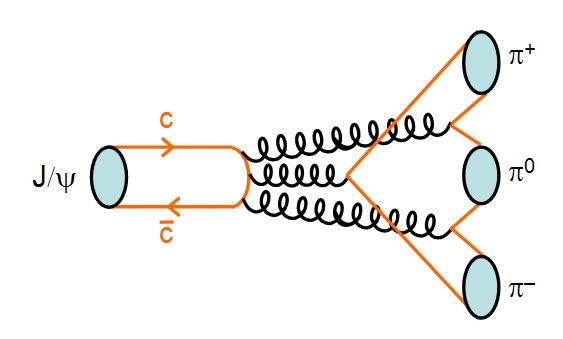 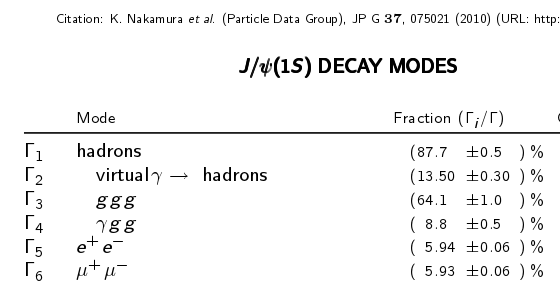 The striking takeaway, which confused experts to no end when the $\psi/J$ was discovered, is that the OZI suppression in, notably, $\Gamma_3$ reduces a strong rate to the pitiful status of competing with an EM one, $\Gamma_2$; also note the anaemic strong/EM ratio $\Gamma_3/\Gamma_4$.

At the time, nobody had seen anything of the sort,$^*$ making the narrowness of the $\psi/J$ a bewildering scandal.

$^*$I was in the corridor when (1975) George Zweig failed to convince Feynman of the logic of his eponymous rule yet again, and had to leave his (RPF's) office dejected with the door angrily slammed behind him... being right is not everything all the time...

Not the answer you're looking for? Browse other questions tagged particle-physics strong-force gluons or ask your own question.

23
Decay of massless particles
29
What the heck is the sigma (f0) 600?
4
should the Z0 decay at the same rate that the neutral pion?
6
Understanding the Particle Data Group review documents
2
Do gluons interact with each other by the strong foce?
7
Why does charmonium (and phi mesons) not decay via quark and antiquark annihilation?
1
Does the Breit–Wigner formula indicate “violation” of energy conservation?
1
Why is $J/\psi$ not being able to decay into $\pi^+\pi^-\pi^0$ (Ozi-rule)?
1
Main decay of $ J / \psi $
5
Why are semileptonic decays of the $\Lambda$ baryon so suppressed?