There is a question in my textbook. If a massless inextensible string is pulled on with a force of $10 N$, at both ends, what is the tension in the string?

It’s a very common question. The answer is $10 N$, cf. e.g. this & this Phys.SE posts. It can be proved using Newton’s $2nd$ and $3rd$ law. If we think of the string as a series of links in a chain, for example, or if we think about the adjacent molecules in the string, then we can prove using Newton’s $2nd$ and $3rd$ law that tension in the string is $10N$ at each point along its length.

But what if we pulled on the ends of the string with forces of unequal magnitudes? This question occurred to me and I kind of got confused. My intuition says that the string has a net force acting on it, and hence it would accelerate. But because the string is massless, Newton’s 2nd law did not help me understand this situation. My question is,

If we pull on the ends of a string that is massless and inextensible, with forces of $60N$ and $70N$ respectively, what would be the tension in the string?

I gave it some thought, and I thought this situation is similar to an atwood machine, two masses $6kg$ and $7kg$ respectively, hanging from a pulley. The pulley is massless and frictionless. The string is massless and inextensible. Because of gravity, one end of the string is being pulled on with $60N$, and the other end is being pulled on with $70N$, isn’t this situation similar? If I work out the tension in the string using $T$ = $\frac{2m_1m_2g}{m_1 + m_2}$, it gives $T$ = $64.6N$.

The acceleration of the system is given by

Since both masses have the same acceleration, the net force $F_1$ acting on $M_1$ is by Newton's second law

The net force acting on $M_2$ is by Newton' second law

Now we know that the string is experiencing the same acceleration $a$ at the two masses. Per Newton's second law on the string you have, where $F_{net}$ is the net force on the string,

If both $F_{net}$ and $M_{string}$ are zero, you can have any non-zero value of $a$ without violating Newton's second law. 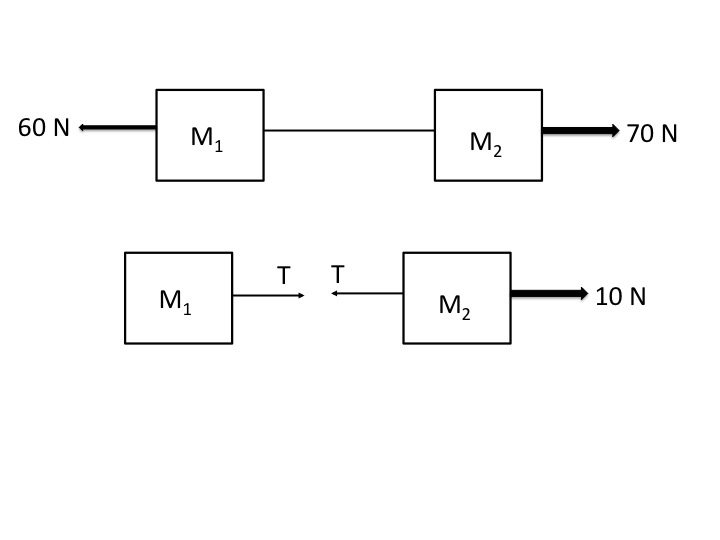 Consider a variation on the Atwood machine where instead of hanging straight down, the two masses $m_1$ and $m_2$ each sit on a separate frictionless plane at an angle of $\theta_1$ and $\theta_2$ to the vertical. The planes are joined along a ridge and the string connecting the two masses runs over the ridge, again without friction. The simple Atwood machine corresponds to the case $\theta_1=\theta_2=0$.

where $T$ is the tension in the string. This gives us

2
Can we define tension in a string as the reactive force produced in a string being pulled at both ends?
0
Tension on a massless string
0
Where would a string being pulled from both sides snap and why?
0
What is the direction of Tension Force in a rope pulled at its two ends with equal forces?
0
Tension in a string with unequal forces
4
Atwood machine: force on pulley
0
Tension in string connecting an axis of rotation with a pulley and a mass
0
Can tension change in a massless string if there are three forces acting on it?