Potential difference across a resistor in a simple circuit

Apparently, varying the resistance of the variable resistor can change the reading on the voltmeter.

What I previously believed: Changing the resistance of the resistor doesn't change the potential difference detected by the voltmeter, but instead, it changes the current going through the resistor (less resistance, more current).

Can someone explain this concept to me? Although this may seem like a simple concept, I just can't seem to wrap my head around the basic ideas of voltage, resistance, and current, since the beginning of high school physics...

Changing the resistance of the resistor doesn't change the potential difference detected by the voltmeter, but instead, it changes the current going through the resistor

What you say is true only in cases when the circuit has only one resistor.

So in such a case you may first find the current flowing in the circuit by Ohm's law assuming the connected voltmeter doesn't have any effect on the circuit.

Now that we've found the current, you can find the voltage dropped across the variable resistor easily by Ohm's law.

What I previously believed: Changing the resistance of the resistor doesn't change the potential difference detected by the voltmeter, but instead, it changes the current going through the resistor (less resistance, more current).

See the circuit diagram below. It assumes a very high input impedance of the voltmeter.

Current delivered to the resistor $R_L$ connected in parallel with the battery causes a voltage drop across the internal battery resistance $R_b$. That means the voltage across the battery terminals read by the voltmeter will be less than the battery EMF. 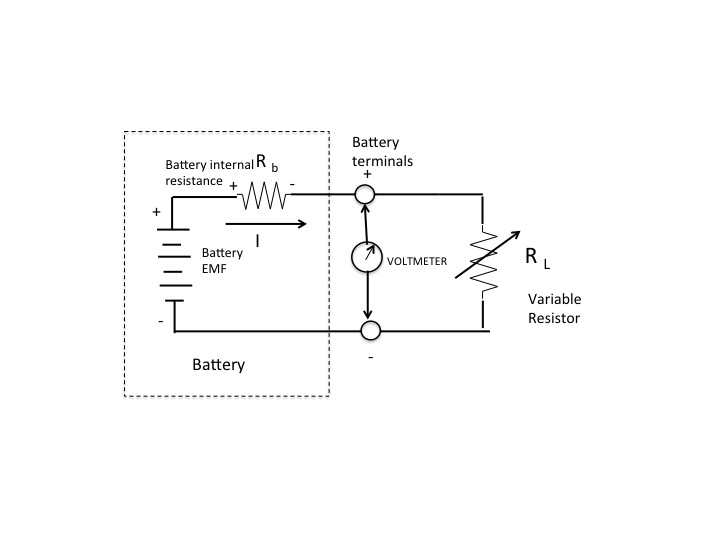 Not the answer you're looking for? Browse other questions tagged electric-circuits electrical-resistance voltage electrical-engineering or ask your own question.

1
Why does the potential drop across a battery and resistor equal the emf of the battery?
0
Voltage across parallel combination on adding another resistance
0
Why are we connecting voltmeter in series with power when we measure voltage across it?
0
Why is the electric potential difference independent of resistance?
0
Finding the Internal Voltage and Resistance of a Battery given the behavior of the circuit it's part of
1
Voltage Change Across a Resistor/Circuit
0
If there is full voltage drop across a single resistor then how the current flows further in the circuit?
5
Why does a voltmeter have to have nearly no current passing through it?
0
Graph profile of the voltage drop vs resistance across a resistor, and the physics behind electric potential difference