I am then told to insert two thick bi-convex lenses of $10 cm$ and $20 cm$ effective focal lengths into the system instead of the thin optical lenses, so that I get the same image with the same object $2 cm$ to the left of the front focal point. These thick lenses have all of the typical information available that one would find in a lens catalogue (radius of curvature, principal plane distances, refractive index, etc.), and I can provide this information if requested.

After insertion of the thick lenses, my system looks like this: 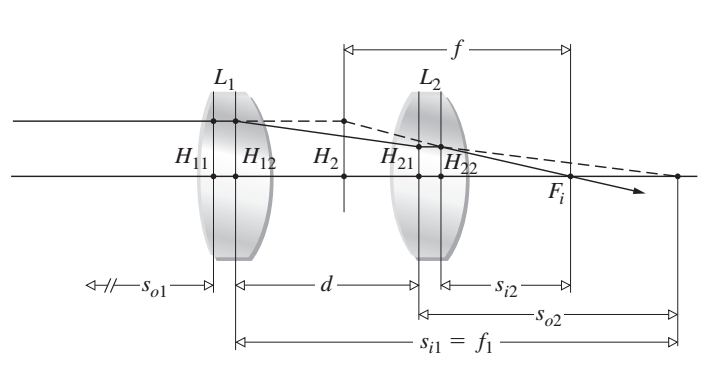 (From Optics, Fifth Edition, by Hecht.)

(Note that $d$ in the thick lens picture above is different to the distance that I am describing below.)

I have two problems:

I would greatly appreciate it if people could please take the time to clarify this.

At this level of approximation (parallax approximation/Gaussian optics), a thick lens is nothing but a thin lens with rays "skipping" or "teleporting" through the distance between the two principal planes.

So if you use a thick lens with the same focal distance as the thin one, just place its front principal plane where the thin lens used to be. Then for the following components, measure all the same distances you had for the thin lens, but measure them from the back principal plane this time. In effect, you're just adding the thickness of the lens to the whole system - nothing more and nothing less.

As for what the question meant by "same image", I don't know but I'd guess it means same orientation, same magnification.

This sounds a bit like a homework question so I won't post any specific numbers, but hopefully I helped you understand the nature of the thick lens to see it's almost as simple as dealing with thin ones.

Not the answer you're looking for? Browse other questions tagged homework-and-exercises optics geometric-optics lenses or ask your own question.

4
Compound lenses and virtual images
5
Why do powers of lenses get added?
4
How is focal length defined for a two-lens system, separated by a distance $d$?
0
finding focal point of concave lens using concave and convex lenses
1
Does the position of the final image in a multiple lens system found by the thin lens formula always agree with the ray diagrams?
2
Geometric optics question (from 2001 GRE)
0
If you have 2 lenses, is it better to place the stronger lens first or the other way around?
3
What happens in a two lens system with two converging lenses when the object is placed at the focus of the first lens?
2
Derivation of combination of lenses using different sign conventions