Voltage is always related to two points, because it means a difference in electric potential, between two points.

If we want to express the voltage between A and B, we could say:

And there is no place to doubt.

The problem is, if we want to write it using less text, as follows:

The reader could be confused and ask:

But hey, is A the end with higher potential or is it B?

Sign might matter or not, but I think it does, since it gives a consistent understanding of what's going on, if we see a represented diagram and somewhere it says: $V_{AB} = 3 V$

There are a lot of similar questions regarding this topic, like this one I pasted recently.

But here and now I want to ask a very specific thing that deserves its own question:

What does the shorthand $V_{AB}$ actually mean?

I was taught in university it means: "potential you get from going from A to B".

What I got from the answer at a related question is that when you write $V_{AB}$ you explicitly consider that A has a higher potential than B. It's not about going from A to B at all, but from taking the voltage between A and B and saying:

Hey, in this case, A has a 3 V higher potential than B

That makes a lot of sense, but it also turns the reverse into something that must be considered.

I have a circuit. And somebody asks me to calculate $V_{KS}$, where K and S are two nodes in the circuit.

This is not telling me to calculate the voltage "going from K to S".

Please suppose that K is at a higher potential than S. Calculate the value.

So you do it, and if the sign happens to end up being negative, it means that the supposition was incorrect, and S is at a higer potential than K.

Of course, maybe nothing of this is that important because in real life, one knows what one is doing and everything is fine.

But in a situation where one is learning and is asked to solve circuits with messy values that randomly jump between the positive and the negative, it is very helpful to know once for all what the real meaning of the $V_{AB}$ shorthand is, and if it's standard or if it also has multiple interpretations.

Is there any reference where this is stated clearly or is it just something that everybody agrees with and just knows?

You are correct is saying that the labelling is all down to convention and one hopes that a convention is clearly stated before one attempts to start labelling.

As you have pointed out $V_{\rm A'B'}$ also can be defined as the change in potential in moving from position $A$ to position $B$.

Once circuit diagrams are available then life can become a bit easier but again the conventions used must be stated beforehand. 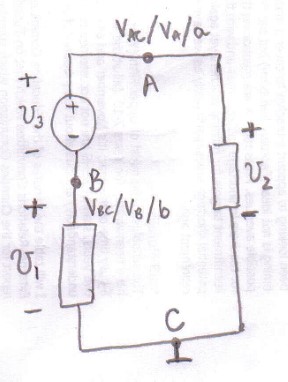 The plus and minus sign by the side of circuit elements also have a meaning.

I am afraid that you will always need to find out the convention which is being used at the start.

PS There is the same need for a clearly stated convention in other fields eg when forces are labelled.
$F_{\rm AB}$ could mean the force on body $A$ due to body $B$ or the force due to body $A$ on body $B$.

Rather than try to respond to your questions point by point, perhaps the following will help you to make sense of this. If after considering the following you still have questions, please comment further.

Let's start with the following definition of voltage, or potential difference, from the NCEE reference handbook for the FE exam for Electrical and Computer Engineering.

Voltage : The potential difference $V$ between two points is the work per unit charge required to move the charge between the points.

Let's apply this definition to the term $V_{AB}$ by substituting it for $V$ in the definition of voltage:

Voltage $V_{AB}$: The potential difference $V_{AB}$ between the points $A$ and $B$ is the work per unit charge required to move the charge from point $A$ to point $B$

Next we have the following conventions pertaining to the electric field and current.

Regarding 2, even though we now know that in most cases current is the flow of negative charge (electrons), this convention was established during Benjamin Franklin's day when electricity was not fully understood and we have been stuck with it since.

Now, with respect to $V_{AB}$ which point is considered high potential and which point low potential, $A$ or $B$? That will depend on the direction of the electric field between the points.

Bottom line: Point $B$ is designated as high potential relative to point $A$ if it takes external (to the field) work to move positive charge from $A$ to $B$.

Not the answer you're looking for? Browse other questions tagged electricity voltage or ask your own question.

0
What is the sign of voltage if I move from the positive part to the negative part?