Lift of an airfoil: viscous vs inviscid results

At this point, I understand that the main difference comes from the boundary layer (BL). So that if the airfoil is at sufficiently high Reynolds number and at low incidence, a case where the BL is sufficiently thin, the viscous and inviscid results should not be very different.

When the incidence is increased and the BL become thicker (without separation), the difference between the two computation should increase, with the "inviscid" lift grater than the "viscous" lift.

Now the question, why does the lift decrease when BL thickness increases ? Is it only an effect connected to the "modification" of the airfoil geometry due to the BL ?

Thank you for your answers.

The answer by tpg2114 does a good job of explaining why the loss of energy in the flow due to viscous effects should result in a reduction in lift. I would like to add a few comments about the effective modification of the airfoil shape due to the boundary layer (since the question specifically asked about that).

At sufficiently high Reynolds numbers, flows over airfoils can be computed (to engineering accuracy) using viscous/inviscid interaction techniques, rather than solving the full Navier-Stokes equations. These are based on the idea that the viscous effects are confined to a limited region near the airfoil surface (the boundary layer), with no pressure gradients normal to the surface, and with inviscid flow outside the region. Inviscid flow and boundary-layer calculations are performed in an iterative process, with the boundary between the viscous and inviscid regions determined by moving the points on the airfoil surface in the normal direction, by an amount equal to the computed displacement thickness of the boundary layer.

This procedure amounts to effectively modifying the airfoil geometry, the major effects being a thickening and a decambering of the foil section. At the risk of oversimplifying, the thickening causes an increase in the drag, while the decambering causes a reduction in lift. (An alternative procedure simply changes the normal-velocity boundary conditions at the airfoil surface, resulting in an approximately equivalent outward displacement of the computed streamlines.)

A good example of a viscous/inviscid calculation for a case with relatively thin boundary layers and no separation is shown in the figure below. This was taken from the book Analysis Of Turbulent Boundary Layers by Tuncer Cebeci and A.M.O. Smith. (I should probably disclose that Tuncer Cebeci was my direct supervisor for several years). 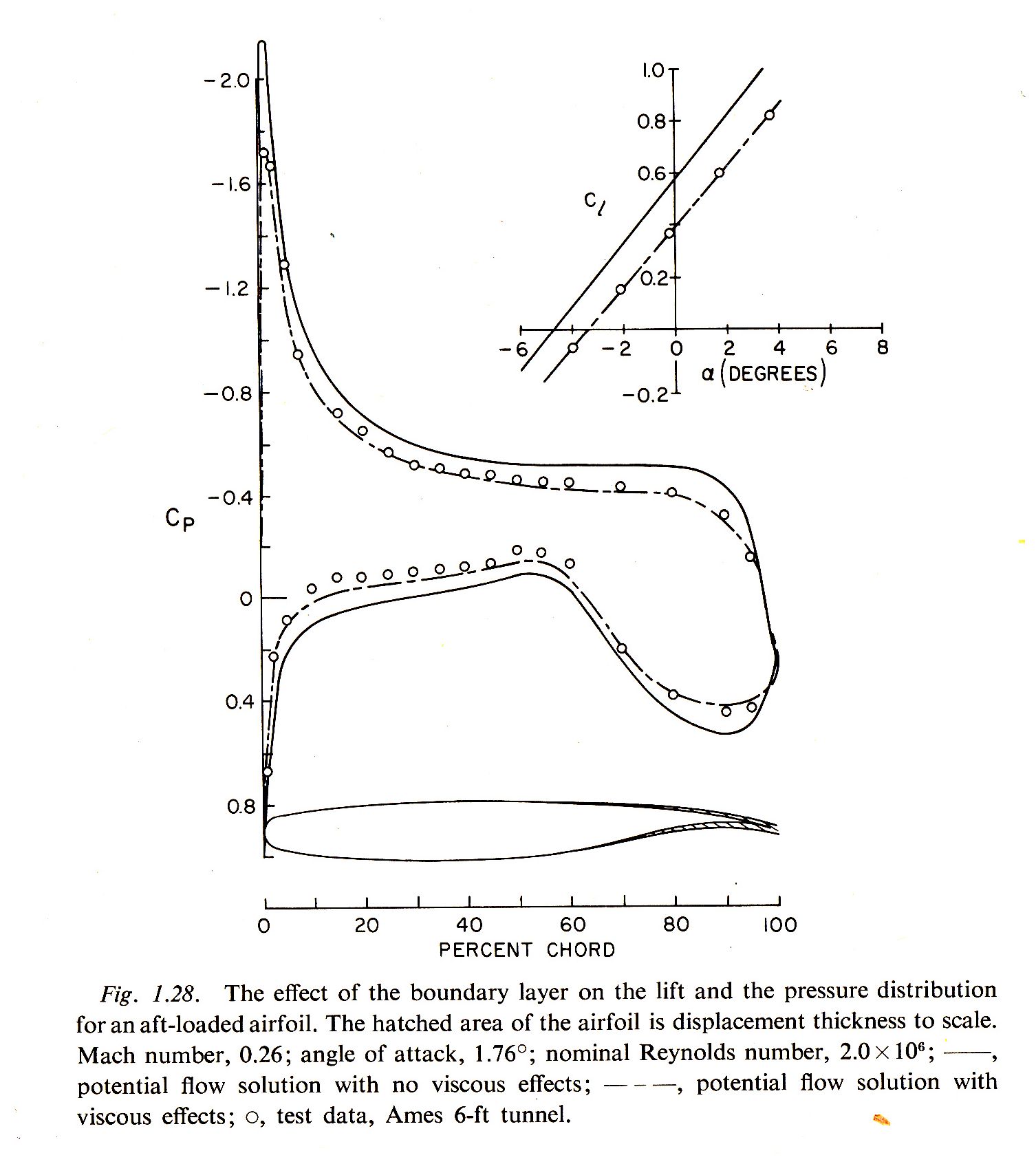 When the boundary layers are thin, it is somewhat difficult to visualize the decambering effects, but it becomes obvious in more extreme cases. Even when flow separation is present and the boundary layers are thicker, viscous/inviscid interaction can sometimes give a remarkably good approximation to the actual flow. This is illustrated in figure below, from the textbook Flight Vehicle Aerodynamics by Mark Drela, in which the red curve surrounding the airfoil represents the effective shape about which the flow was calculated. 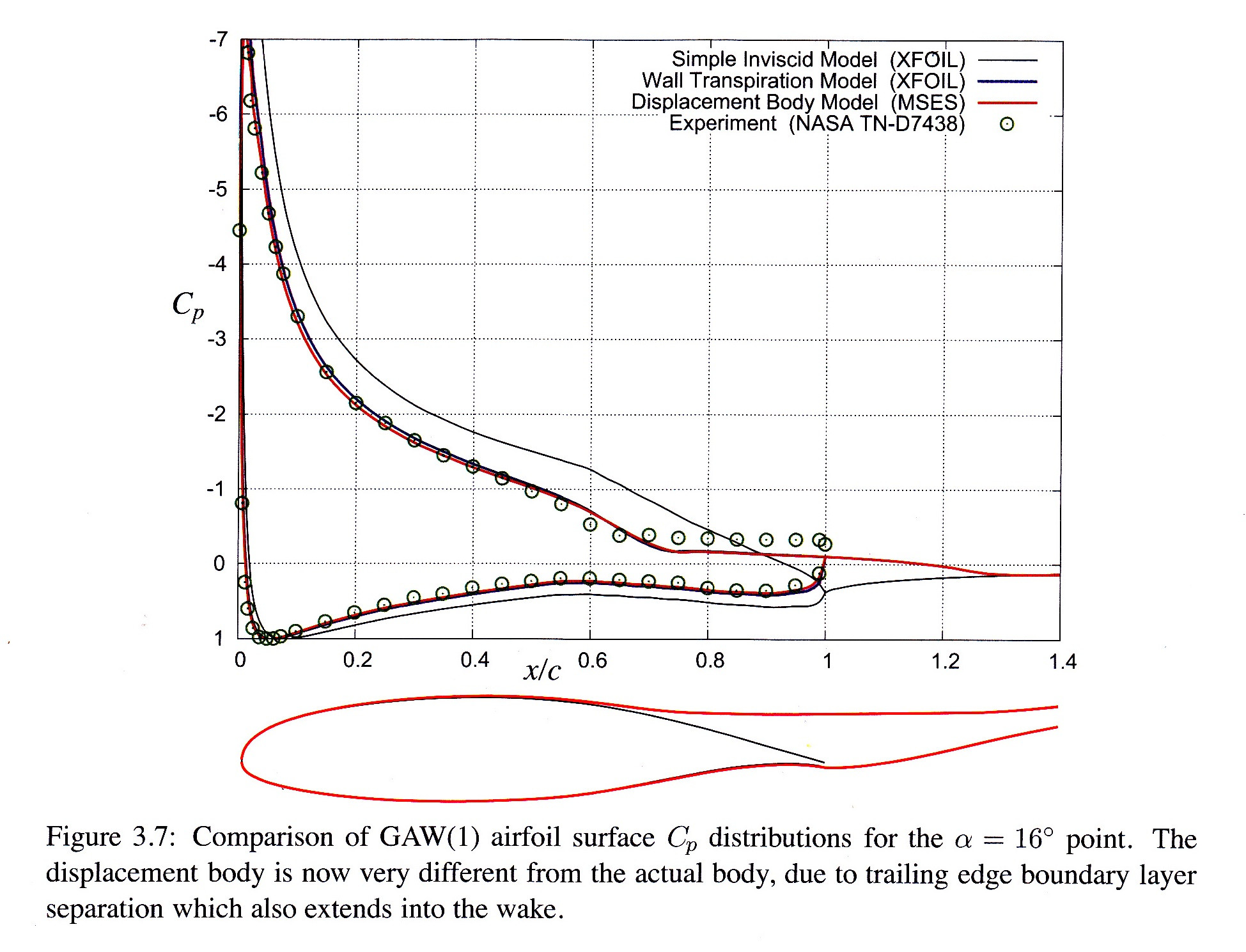 The easiest way to approach these kinds of questions for me is to forget the equations for a moment and think just in terms of energy and work. In the inviscid case, there is no drag on the airfoil. This means all of the changes in pressure can be used to do something, like create lift. Note: since there isn't anything other than pressure and velocity changes happening, pressure is analogous to energy.

Now consider the viscous case with a very thin boundary layer. Viscosity introduces another place for energy to go. The friction between the moving air and the airfoil creates the boundary layer, which means some of the energy gets converted from potential energy (aka total pressure) into kinetic energy (the velocity) and internal energy (temperature changes due to friction -- this is where friction losses go). Now, instead of all of our energy changes doing something useful like creating lift, some of it gets lost to internal energy through friction. But if the boundary layer is very thin, then the losses are fairly small.

Not the answer you're looking for? Browse other questions tagged fluid-dynamics computational-physics aerodynamics navier-stokes lift or ask your own question.

7
Why airplanes fly: the final truth
5
What is the theoretical justification for a fluid flow's being irrotational?
4
Physical interpretation of the change of diffusion term in navier stokes equations
5
Explicit form of the entropy production in hydrodynamics
3
Sound speed on Navier-Stokes/Euler equations
2
Strouhal number motivation
0
Driving Euler-Bernoulli equation for a compressible viscous flow from continuum conservation equations of an steady-state flow
2
Original Derivations of Euler Equations or Navier-Stokes Equations