What is the sign of voltage if I move from the positive part to the negative part? 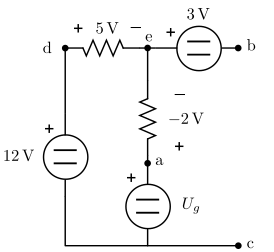 Of course this is not about getting some homework done, I really want to understand this.

So, this is my reasoning:

It has the same value as the tension from b to a, just with an opposite sign.

So, the value will be a positive or a negative volt (there is one volt difference, we just don't know the sign).

Now, I suppose this is a common scenario where electrons are the ones carrying the charge.

If I go from a to be I am doing the opposite thing, going from + to -.

So, the math go as follows:

The solutions sheet in this example say it's +1 V, but not why.

In the next image from Wikipedia we can visualize the situation.

Suppose it's a real battery where electrons are going out at the negative side and being attracted in the positive side.

The arrow that represents voltage is very clearly drawn as a pushing force from - to +.

I only found passive and active sign conventions. Both talk about what is considered positive for current. Current in or out. But it does not talk about tension. Actually, it represents tension in both cases going from $-$ to $+$.

Passive: current is being consumed.

Active: current is being created.

I'm just going to try to answer this question without digging in to any of the side issues you raised.

It will help to remember a schematic is a highly abstracted view of an electric circuit. You can think of it as a way of visually representing a set of equations.

For example, a resistor designated R1 with value $R$ connected with its (arbitrarily chosen) positive node at a and negative node at b is a visual representation of the equation

(For your problem this is actually irrelevant, since they haven't given you the value $R$, they've just told you one terminal is at -2 V relative to the other terminal)

The advantage of using abstract models like these schematic diagrams is that it saves you having to consider numerous physical details like whether the charge carriers are positively or negatively charged, what electric fields are present around the devices, etc. You should take advantage of this to focus your attention on the information presented in the schematic diagram and how it can be used to solve the problem, rather than complicate the problem by bringing in details not needed to find the solution.

So in this specific problem you want to find the voltage between a and b. You have a diagram that shows you that

From simple arithmetic you know

No information about the type of charge carriers in the system, or the passive sign convention, or even the actual behavior of resistors is needed to solve the problem from the given information.

This is a recipe for lots of sign errors, including probably the one you're asking about here.

The rules for predicting how electric circuits work were mostly discovered before we knew about atomic structure, before the discovery of the electron, and in ignorance of the sign of the dominant charge carriers. Apart from a few esoteric exceptions, circuit analysis is exactly the same when you consider positive charges moving from positive to negative voltages as when you consider charges with the other sign moving the other way. Except that with two negatives you have extra opportunities to make a sign error.

There ain't nuthin' to be gained by "doing the opposite thing," as you write, especially if you change the sign but not also the direction of the charge flow.

A positive charge that starts at $b$ and goes to $e$ would gain 3V from the battery, then lose 2V across the resistor between $e$ and $a$. So the potential at $a$ is 1V more positive than the potential at $b$. Don't be distracted by the fact that we guessed the wrong sign for majority charge carriers in metals in the distant past.

Not the answer you're looking for? Browse other questions tagged electric-circuits electric-current electrical-resistance voltage conventions or ask your own question.

6
Voltage and current of positive lightning
6
Sign conventions for voltage drop and gain in circuit
1
Defining Reference Directions for Voltage and Power (sign convention)
0
What's the difference between a positive and a negative current?
1
Voltage sign conventions between two points
1
Voltage Drop Across a Resistor / Direction and Sign of Voltage
0
In which terminal does current starts to flow first i.e. positive or negative?
0
AC current and capacitors
0
If the current entering a charge preamplifier is a positive pulse, could the output voltage really be a positive pulse?
0
How does the voltage affect current?