I realized there is an issue with integration in physics problems that I had always taken for granted. As an example, the relation between work and potential energy is

when integrating from an initial (A)to a final(B) configuration, textbooks state directly that the result is

Going into the detail,aren't we definite-integrating both sides of the equation ? From the mathematical point of view (forgetting that work at one point makes no sense), shouldn't the result be the following?

Textbooks just put $W$ instead of $ {W}(B)-{W}(A) $,arguing that the sum of the small contributions of work yields the total work. It seems as if the left-hand side had been integrated indefinitely and with integration constant=0 and the right-hand, definitely.

The same happens, for instance, with force (and in this case force at a point does make sense, so this illustrates the problem is not only with work-type entities):

In a hydrostatics problem, we want to get the force due to water pressure at a window of a parallelepipedal acquarium 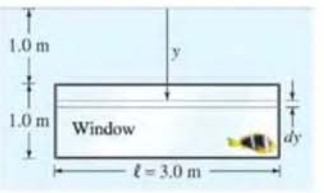 It's found that the force on each horizontal strip is $dF=PdA=\rho gyldy$, which is later integrated to yield:

How do I make sense of it mathematically, are we actually definite integrating the left-hand side and indefinite-integrating the right hand-side (which kind of seems wrong)? Specifically what is happening at both sides of the equation when integrating?

The force from pressure in your second example is the same, just in one dimension higher: The $P\mathrm{d}A$ is an inexact 2-form that can be integrated over 2-dimensional objects (=surfaces), and this produces a functional on surfaces that we can call $F$ that assigns to any surface that integral.

In general, we note that the viewpoint that unifies both exact and inexact differentials is the notion of differential p-forms that can be integrated over p-dimensional objects. The differentials $\mathrm{d}U_p, \mathrm{d}W, \mathrm{d}F$ appearing here are all examples of such forms. The $\mathrm{d}U_p$ is special, because it is the (exterior) derivative of a 0-form (a function) $U_p$, while the others are no such derivatives. In full generality, if you have a $p$-form $\omega$ that is the exterior derivative of a $p-1$-form, you can use a general version of Stokes' theorem to reduce an integral of $\omega$ over a $p$-dimensional object to the integral of $\sigma$ over the $p-1$-dimensional boundary of that object.

Since you're wondering in a comment how to tell whether any given form (or "differential" is a derivative or not: This is answered by Poincaré's lemma: On nice (contractible) regions, it is necessary and sufficient for the (exterior) derivative of a form to vanish in order for it to have a $p-1$-form that is its antiderivative.

After a few clarifying comments I'll go back to rewrite from scratch my answer.

As integral of a differential form (if one likes the exterior algebra point of view, as integral of a $1$-form) $[1]$ is in general path dependent. Which means that for a given pair points $A$ and $B$ $W_{AB;\gamma}$ will depend on the curve $\gamma$ chosen to join them. In such (generic) case, one says that the form ${\bf F}\cdot d{\bf s}$ in non-integrable or non-exact.

So far, there is no ambiguity in the notation.

Problems can come if one uses without care the mathematical notation for the differential forms (not their integrals).

Mathematical notation is actually coherent. A differential form (exact o non-exact) is indicated using Leibnitz's d notation. For instance $dW={\bf F}\cdot d{\bf s}$. Notice that such a notation does not imply that the integral over a path of $dW$ would be independent on the path. It is also not implying the existence of a potential in general.

However, and this is the key point, there are some special cases where $dW$ is exact. Modern mathematical notation usually does not use different symbols for making a distinction bteween exact and non-exact forms. However if the generic expression for work $dW$ is explicitly written as a function of its independent variables and their differentials it is possible to check explicitly whether $dW$ is exact or not.

In both your examples, in the first one, as soon as you introduced a potential energy, you were assuming an exact form, while in the second example, since you were dealing with a function of one variable, you were again implicitly dealing with an exact form, with all the consequences of the case. In particular, in both cases, since there is a scalar function whose differential is what was called $dW$, it is consistent to call $W$ such a function and to introduce the notation $W(B)-W(A)$ for the integral of $dW$.

Of course, in the general, non-integrable case, this is not allowed.

Not the answer you're looking for? Browse other questions tagged newtonian-mechanics work potential-energy notation calculus or ask your own question.

52
How do we know that heat is a differential form?

0
How to show that the gravitational potential energy of a two particle system is -2 times the total kinetic energy, without using the virial theorem?
1
Bounds of Integration (with respect to something that is not time)
0
Determining whether a force is conservative
0
Partial Integration and the Levi-Civita Symbol
0
Time to move along a path?
12
Integrating acceleration - wrong choice of bounds in textbooks?
2
How can we have negative work in electrostatics, if $W=(\epsilon_0/2)\int\! E^2\ \mathrm{d}\tau$?
10
How can you conclude that gravity is a conservative force?
0
Kinematics confusion regarding sign of integration