Why do we need 3 variables to parametrize $\scr{I}^\pm$ in a Penrose diagram? 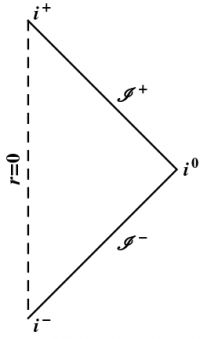 If I understand correctly, $i^-$ and $\scr{I}^-$ have coordinates $r=\infty$ and $t=-\infty$ while $i^+$ and $\scr{I}^+$ have coordinates $r=\infty$ and $t=+\infty$. I would think, then that they can be parametrized with two variales, namely, the angles in a two-sphere. However, in many textbooks (like this review by Strominger https://arxiv.org/abs/1703.05448, on page 13) they claim that, for example. $\scr{I}^-$ is a three dimensional surface that can be thought of as the product of a two-sphere and a null line. Where is this extra degree of freedom to parametrize the null infinity coming from?

My attempt at an answer: The only thing I can think of is that, although $r$ and $t$ are infinite at the boundaries, there's still the degree of freedom to choose the ratio between them. I'm thinking that the worldline of a massive particle can end up at $r=\infty$ and $t=\infty$ as well as the worldline of a massless particle, but the relation between $r$ and $t$ will be different in each case since the massless particle followed a null geodesic all the way to infinite while the massive particle followed a timelike geodesic. Is this correct?

I'm just answering myself to close this thread, but the answer is basically what people said in the comments:

the regions $\scr{I}^\pm$ are reached by travelling on a light ray (i.e. a null geodisic) which satisfies $r=\pm ct + r_0$ where $c$ is the speed of light and $r_0$ is just the initial position at $t=0$. This means that geodisics going towards $\scr{I}^+$ will have a constant $u=r-ct$ while geodisics going towards $\scr{I}^-$ will have constant $v=r+ct$. This null variables basically label all the different null geodesics and are a good coordinate to parametrize the null infinity.

Here's another way to think about it. It's true that both $r$ and $t$ go to infinity, but the surface is still three dimensional for the following reason. If $u = t - r$, and $r \to \infty$ while $u$ remains fixed, then $t = u + r$ should be thought of as $t$ "shifted by an infinite constant." While $r$ is "set" to infinity, bringing the dimension down from $4$ to $3$, $t$ is merely "shifted" by infinity, keeping the dimension fixed at $3$. A similar thing happens at the black hole horizon.

Not the answer you're looking for? Browse other questions tagged general-relativity special-relativity causality or ask your own question.

2
Are the intersections of past and future light cones spacelike?
2
Kahn-Penrose metric
1
Explicit Symmetry Breaking: Where do the additional d.o.f. come from?
1
Why are the topological dimensions of spatial\timelike\null infinities 0\0\2 respectively?
4
Timelike Boundary
1
How can I calculate the period of a photon in a gravitational field?
1
Timelike, Spacelike and Null geodesic
3
Physics near null infinity