Effects of making a hole in a mercury barometer

In a mercury barometer, if we make a hole in the portion above the level of mercury, then the mercury level in the column drops and ultimately all the mercury in the column goes into the reservoir below or if it's capacity is not large enough it overflows.

The following image shows a different situation, when we make a hole below the level of mercury in the column: 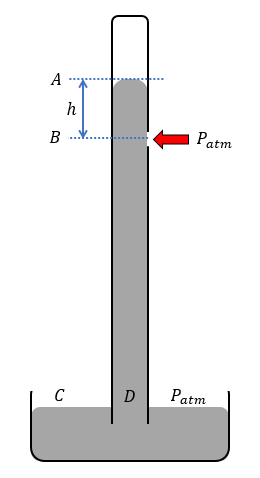 The pressure at $A$ is zero and it gradually increases as we move down the column. The pressure at $C$ and $D$ are same as they are in the same horizontal level, and it is equal to the atmospheric pressure $P_{atm}$ From this reasoning, we can say that the pressure at $B$ is lesser than $P_{atm}$.

So, I concluded that the mercury doesn't come out through this hole.

But, what will happen after this step? The reason, why I got this doubt is described below:

We know from Pascal's Law that a pressure applied to a particular section of a fluid gets transmitted to all regions without any loss. Before we made the hole, the force exerted by the mercury column at $B$ was balanced by the contact force provided by the walls of the column. But, after we make a hole, the force exerted on the hole by the atmosphere is larger than the internal force. So, the pressure at all the points within the fluid must increase by $P_{atm}$.

Kindly explain what will happen to this system. Is it correct to apply Pascal's Law in this way? Are my reasonings correct?

Image Courtesy: My Own Work :)

The simple force diagram that we rely on to prove that we can measure air pressure with this device gets far more complicated when you start drilling holes.

Consider doing this with water. Water behaves reasonably intuitively. If you drill a hole in the end of a water barometer like this, what you expect will happen. Water will pour out of the hole, and then all the water will drain from the tube.

Mercury, however, has an extraordinarily high surface tension. It loves to attach to itself and cares much less to interact with air or the edges of the tube (for most tubing materials).

Now our model is more complex. What you will find is that the forces on the mercury near the hole are affected not just by air pressure but by the surface tension as well. The mercury will try to keep the surface area of the mercury/air interface as small as possible, preventing air from going in or mercury from leaking out.

The result? The barometer will probably remain intact. The surface tension effects will provide the additional forces needed which the air pressure does not, and you'll see no significant change.

This, of course, depends on the size of the hole. Make the hole too big, and the surface tension will no longer be able to hold the mercury in.

By the way, mercury spills are bad news. I highly recommend not drilling into mercury barometers. Its really nasty stuff and needs to be disposed of properly.

At first, for a small hole, the atmospheric pressure will be balanced by the surface tension. The horizontal force to inside over the liquid will be compensated by a reaction force to outside from the neighbouring container surface to the liquid. The pressure will not propagate to all volume.

But if the hole is not so small, the air will overcome the surface tension, forming bubbles that go up to the empty space.

As soon as there is enough air there for the pressure in the hole be greater than the air outside, the liquid starts to flow outside.

I'm going to assume that the hole is big enough for the air to break the surface tension of the mercury. Otherwise, the results won't be very interesting.

Pressure on the inside of the hole is smaller than on the outside before you open the hole, so the first thing that happens must be an influx of air into the tube.

This air provides ambient pressure to the middle of the tube. The mercury above the hole is not heavy enough anymore to withstand this pressure, so it will be accelerated upwards, likely hitting the top of the tube if the hole is not very low above the reservoir level.

The hole will basically blow a big, quickly expanding bubble into the mercury.

Once things are settled hydrostatically, what happens next depends on the thickness of the tube. If it's thin enough, the situation is stable because the surface tension on the lower end of the upper mercury column stops it from dripping down. If the tube is thick enough, the mercury will start dripping down, allowing the air to bubble up into the top of the tube.

-2
making a hole in a glass tube having water

1
Why sections are irrelevant in a mercury barometer
0
Concept regarding Barometer
0
Why does the water level in a resonance tube increase/decrease as we alter the height of the water reservoir?
4
Is Pascal's law incorrect?
2
Does capillary action affect the accuracy of mercury barometer?
4
Pressure variation in a capillary tube
1
What would happen to a mercury barometer of length smaller than $76$ cm?
0
Closed tube Mercury Barometer cancels pressure of air above the tube?
0
Is mercury in barometer rises infinitely in satellite
1
What what will happen to the height of the Mercury column in a barometer when it is accelerated upwards?