Long story short, my brother made a joke about how stupid it is to celebrate the Earth making one "trip" around the Sun: New Year's Eve.

I've tried my luck on the internet but didn't find anything simple enough to understand. I've read about Kepler's law, and there are nice formulas, but how does he work this out? And how could the first people who knew that Earth was revolving around the Sun guess how much time an entire revolution took?

I asked my brother and he told me if he'd have to do it, he would simply watch the stars and map them, do that every night, and count the days until he came back to the exact same position of the first night. Is that realistic?

In ancient civilizations, astronomy was a serious business (among other reasons, to accurately predict the seasons), so there were a lot of scientists making very careful measurements. Even with the naked eye, you can make quite accurate observations, and the ancients used these observations well.

Hipparchus mostly used exact measuring of the equinoxes (the moment day and night are just as long, and when the Sun rises exactly in the east and sets exactly in the west). It's possible to measure this quite exactly, up to an hour. But Hipparchus also used the data gathered by earlier astronomers, back until 432 BC (~300 years before him). When you have this large time-span, and combine multiple measurements to cancel out any errors, it's thus possible to get very accurate results. Oh, and he used solar eclipses to refine his measurements as well, though the equinoxes were more important (there are more of them).

Incidentally, he was also the first one to discredit your question ;-)

That is, what most people think of as "a year", is actually not the time it takes the Earth to complete one orbit around the Sun. It's very close, but the Earth also precesses: it's top (the poles) very slightly turn around. It also means that Polaris (our current "northern pole star") will not remain the northern pole star forever (but it will for several thousand years). This also means that the time from equinox to equinox is not exactly the same as the time it takes the Earth to complete an orbit, it is shorter by 20 minutes and 24.5 seconds.

Observe where the Sun rises and sets, and how high it gets in the sky at midday. These things repeat after 365 days.

If you would capture sun position in the sky at the same time each day of year - you would get a periodic figure, called Analemma which shows sun's path in a sky through a whole year : 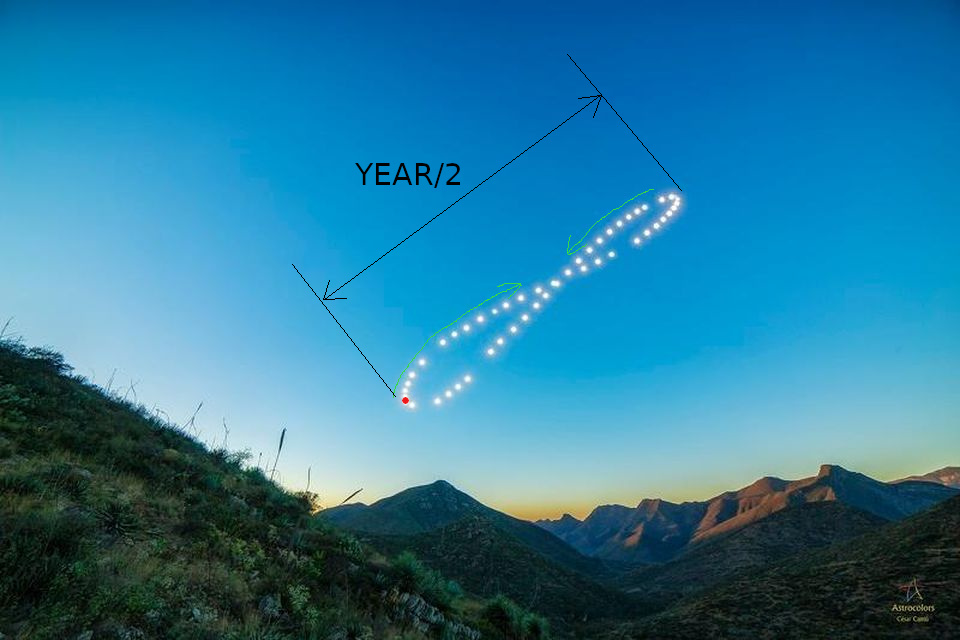 I asked my friend, and he told me, if he'd have to do it, he would simply watch at the stars, and map them, and do that until he came back to the exact same position of the first night. Is that realistic ? I don't think the position would differ so much that the eye could see it. Am I right ?

Please remember there was no light pollution at that time. It was possible to see more stars than today, they appeared brighter and more colorful. The Milky Way, Andromeda Galaxy and Orion Nebula were perfectly visible to the naked eye.

There are dozens of easy indicators in the night sky if you want to know the season:

With this information alone, it is possible to reliably tell the current month by simply looking at the night sky after sunset, without any instrument.

Accuracy could be improved by using a very bright star (e.g. Sirius) and clear reference points (e.g. a far-away mountain).

Guardians of the pole star

You could use Ursa Minor and Ursa Major as an annual clock, with the two guardians rotating around Polaris. They do a full turn in a year, so an accuracy of 1° will give you an accuracy of ~1 day. It shouldn't be hard to measure with an astrolabe. 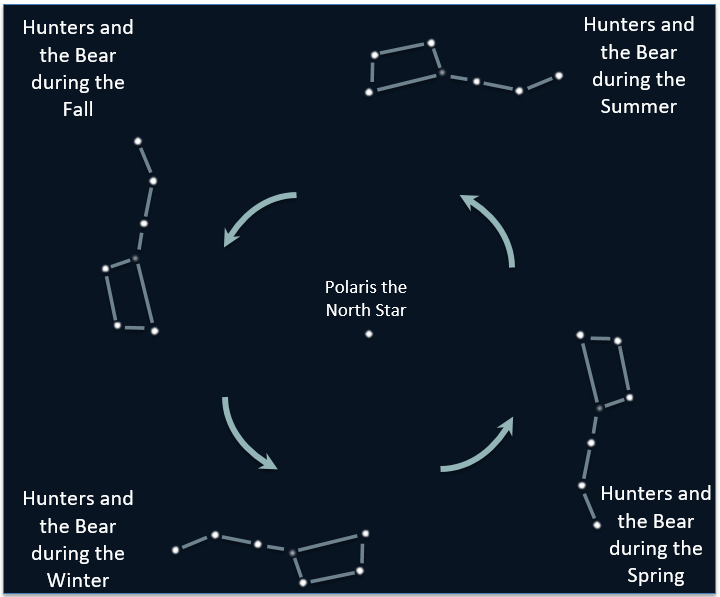 You cannot expect high accuracy if you measure the thickness of a single sheet of paper with a ruler. You can improve it greatly if you stack 1000 sheets, measure the total height and divide it by 1000.

Patterns in star position will repeat after approximately 365 days, but they will repeat almost exactly after 4 revolutions in 1461 days, which gives $\frac{1461}{4} = 365.25$. With enough time and dedication, it's possible to improve the accuracy even further.

In order to find out how the topic evolved in the past 1000's of year, the proper search on the Internet is about the different calendar systems that people employed in the past.

Generally, calendars evolved between better and better precision and different attempts to fit the seasons and the moon phases around some easy calculatable numbers (12, 30, 360, etc...).

It was late in the process when people found out about the movement of the celestial bodies.

It is not that simple. It takes tools such as Stonehenge to accurately time the passage of stars. You may then notice that the Sun's passage across the sky varies with a period of 365.25 days.

It is a lot simpler. In Europe we have four seasons. The same season returns about 365 days later. Over time the measurement got more and more exact.

The reason we have seasons is that the earth axis is slightly inclined compared to the movement around the sun.

Not the answer you're looking for? Browse other questions tagged orbital-motion time astronomy earth sun or ask your own question.

1
How long will it take before the orbit of the earth is 365 days exactly?
0
Angular Momentum Conservation vs Kepler's law
0
Revolution of Earth around the Sun
5
Does Kepler's 3rd law of planetary motion violate the first postulate?
2
What is the reason for so many of uniform circular motions even after so many irregularities in phenomena like motion of planets?