Do axions have an anti-particle?

Axions are the particles that let energy flash between a matter particle and its anti-particle. But according to quantum field theory, every particle has an anti-particle (besides the majorana fermion). So if axions have an anti-particle, why don't they react?

By the way, I am a very smart middle schooler.

The axion is a hypothetical particle; no axion has been observed. (Neither have any particle-antiparticle oscillations.) Since we don't know the quantum numbers of any axion, we don't know whether they are distinct from their antiparticles or not.

I'm pretty sure that most models of the axion don't have any quantum numbers which would change sign under the charge-conjugation operation, which converts particles to antiparticles. Such an axion would, like the photon and the $Z^0$, be its own antiparticle.

Rob's answer is giving the correct physics, but since you are a "smart middle schooler" I would like to address the rest of your question. To start with it will be good to increase your background on axions by reading the wikipedia article. , for encyclopedic information.

Axions are the particles that let energy flash between a matter particle and its anti-particle.

But according to quantum field theory, every particle has an anti-particle (besides the majorana fermion).

So if axions have an anti-particle, why don't they react?

In some theories, if the axion has mass it can decay into photons , the energy supplied by its mass.

This is a Feynman diagram for an axion interaction with a magnetic field, that can allow calculating the probability of this happening within a specific theoretical model: 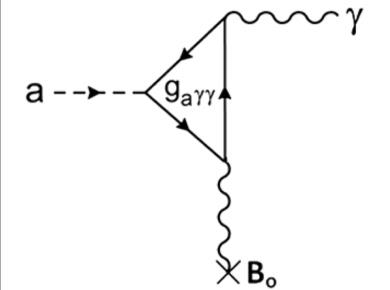 Here is the decay, where the mass of the axion provides the energy. 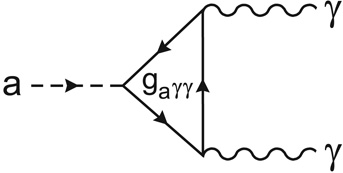 One can then run an experiment trying to detect photons that could be attributed to axion interactions and decays.

Maybe your flashing statement refers to vacuum loop feynman diagrams . Those diagrams cannot exist by themselves, they need an input energy and momentum, they are higher order (much smaller probability) Feynman diagrams that have to be added to calculations to make them more accurate.

A lot of study in mathematics and physics is needed to be able to understand the present model of particle physics interactions.

Not the answer you're looking for? Browse other questions tagged particle-physics nuclear-physics antimatter axion or ask your own question.

16
Is the “protophobic fifth force” observed in nuclear decays a new fundamental force?

5
More on matter and anti-matter
3
What barriers exist to prevent us from turning a baryon into a anti-baryon?
8
Why is the majorana particle a fermion?
11
Can bosons have anti-particles?
0
Are Neutrons and anti-Neutrons attracted to each other over distance?
3
What effects would a finding of Gravitational Repulsion Between Matter and Anti-Matter in the ALPHA Experiment have on Mainstream Theory?
1
Can anti-Higgs particles have formed before any baryonic matter existed or is the Higgs boson always its own anti-particle?
1
What is really a negative energy particle (and why is it different from an anti-particle)?
0
Complex conjugation between particle/ anti-particle?