What is the difference between lasers and fluorescense?

Here is an example from article fluorescence: 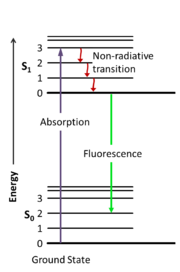 And here is from YAG:Nd laser (four level scheme): 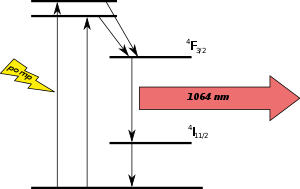 Are laser materials and fluorescent materials completely interchangeable or there are qualitative and/or quantitative differences between them?

In laser materials there is actually fluorescence happening. Laser users call it spontaneous emission. The photon emitted by fluorescence has a random direction and his wavelength will be in the emission spectrum.

But the mechanism that is mainly occurring in laser is stimulated emission. To occur, stimulated emission need an excited medium and an incoming photon which will stimulate the emission and create an identical photon in terms of wavelength and direction. It is the explanation of the spatial and spectral property of laser light. Have a look at https://www.rp-photonics.com/stimulated_emission.html .

In a laser the process that is dominating is called stimulated emission as the name suggests, Light Amplification by Stimulated Emission of Radiation. This is possible when the medium is pumped enough to have more excited electrons in higher states than in the lower state. If $N_{lower} > N_{higher}$ we will have absorption instead. When $N_{lower} < N_{higher}$ we have what is referred to as population inversion. The threshold for lasing.

In a fluorescent material the process that dominates is spontaneous emission which doesn't require population inversion.

This fundamental difference is what sets them apart, other than that they are as you say quite similar.

Not the answer you're looking for? Browse other questions tagged optics laser fluorescence or ask your own question.

7
What makes excimer lasers so complex, rare and expensive?
4
What is the optical power level of common fiber optics lasers?
14
Why do green lasers appear brighter and stronger than red and blue lasers?
2
Lasers and Collimation
3
Is the photon truly not absorbed in Raman scattering?
2
What's the difference between stimulated and spontaneous emission in lasers and diodes?
1
What is the difference between ultrafast laser and normal laser?
3
Uranium-doped solid state visible lasers - feasible?
0
Understanding the following THz-to-optical conversion scheme