My understanding is that length dilation is not symmetrical in all geometric directions. The contraction only happens in the direction of travel. Likewise it seems that light would appear to a stationary observer to reach the stern from the bow of a near-lightspeed starship in less time than it would reach the bow from the stern because the bow is moving away from the lightbeam and the stern towards it. As confusing as it may seem, it appears that the time dilation would be different in each direction. Please explain why this isn't the case.

Yes it is geometrically symmetric, time dialation does not depend on the direction in which you move. This is because the Lorentz transformations for time do not specify the direction, even if you derive the transformation equations for a random direction you can always rotate your reference frame to get the motion along your x direction and you will find that the expression for time doesn't change

There are two relativistic effects at play here- one is time dilation, the other is the relativity of simultaneity.

Time dilation is entirely reciprocal and isomorphic. If you and I are in two different reference frames moving in relation to each other, my clock appears to run slow by a given amount when measured agains the clocks in your reference frame and vice versa.

The relativity of simultaneity means that time in your frame will appear to be out of synch with time in my frame, and the value of the disparity increases over distance. That means that if I travel past clocks in your frame they will seem to become increasingly out of synch to me. That effect is directionally dependent, as a clock I'm approaching will be further advanced than one I have passed.

The two effects have simple spatial analogues. If you have a stretched tape measure it will always give you a measured length that is less than the true length of the distance being measured, regardless of the direction in which you make the measurement. On the other hand, a faulty spirit level will overstate the level on one direction and understate the level in the other, so its effect is directionally dependent.

The sailor on the ship sees them both cover the same distance in the same time.

But the land based observer sees the clocks on the ship all running slow.

The sailor uses these two clocks to time his light and so gets the same time in both directions.

The sailor, of course, sees both clocks on the ship showing the same time, but land based clocks spread out in the direction of travel show the sailor different times.

Likewise it seems that light would appear to a stationary observer to reach the stern from the bow of a near-lightspeed starship in less time than it would reach the bow from the stern because the bow is moving away from the light beam and the stern towards it.

Yes. These times are different, but remember that only complete cycles can define a clock in its fundamental form. Indeed, when a point observer, holding a tiny clock and standing at the stern, emits a photon towards the bow, he needs the emitted photon to be reflected back from the bow in order for him to stop the clock running further by receiving the photon. In this case and by convention, he can determine a complete revolution for his clock's hand using the to-and-fro travel of the photon. 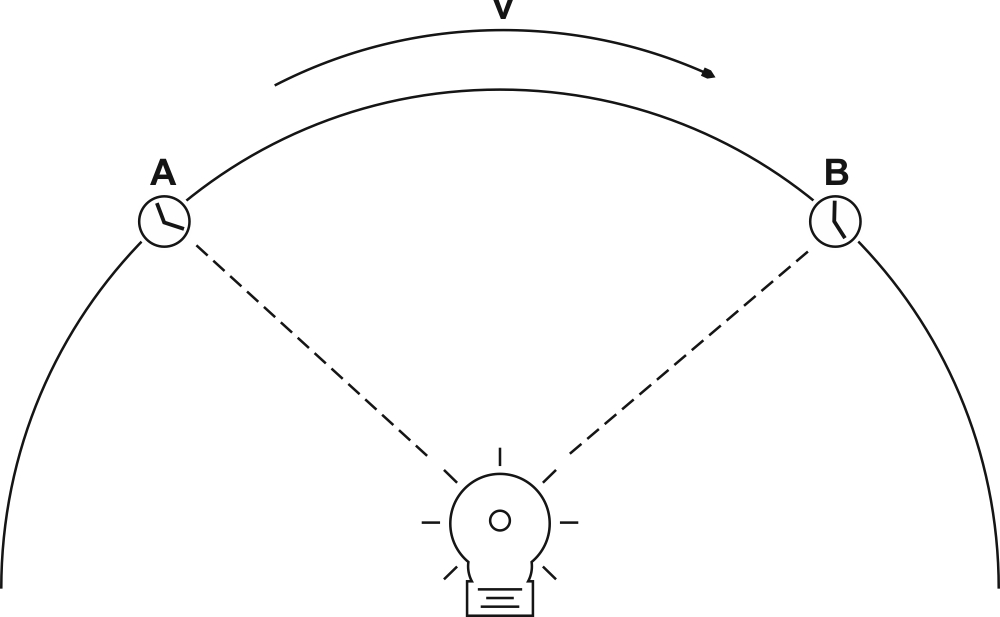 But, as soon as one – way speed of light is “conventional”, “one – way time dilation” is also “conventional”; anisotropic synchronization of clocks A and B would affect amount of accumulated dilation of a moving clock C in different directions.

Consider a circumference of arbitrarily large diameter and ring railroad (that lies on circumference). Let relativistic train (of length $l$) is moving on it with velocity $v$.

Assume that one - way speed of light is isotropic in this frame (in which the railroad is "at rest").

Let there are clocks B and A in the first and last cars of the train. These clocks are equidistant from the center. Someone in the center of the circumference flashes light and synchronizes these clocks, i.e. sets at 0 when the light reaches them.

Now observer in the train can measure speed of light by means of these clocks.

Measured two – way speed of light on path A-B-A or B-A-B will be isotropic and equal precisely to c.

Any clock that was at rest in the railroad’s frame (for example on an embankment of a station close to the railroad) would appear running faster that any clocks of the train; that means that stationary clock on embankment would measure $\gamma$ times longer time interval than two synchronized clocks of the train. Even though a passenger in the train (due to almost undetectable curvature of the rails) could conclude, that clock on the embankment was moving relatively to the train.

Assume that a passenger in the back of the train initially was in immediate vicinity to the clock A and had a clock D. This observer initially set both clocks A and D at 0.

Let this passenger walked inside the moving train from clock A to clock B and back; he compared readings of his clock D with clock B and finally with A again. This observer would find that clock D measured shorter time interval over the whole trip than clock A (twin paradox).

But if a motorman in the train synchronizes clocks A and B in the train Einstein – way (assuming that one – way speed of light was isotropic in the train’s frame), accumulated dilation of “walking” passenger’s clock would also be the same on the trips B-A and A-B.

In that case if this synchronization was used any clock that was at rest in the railroad’s frame (for example on an embankment of a station close to the railroad) would appear running slower that clocks of the train; i.e stationary clock on embankment would measure $\gamma$ times shorter time interval than two Einstein - synchronized clocks (A and B) in the train.

But, if the train is as long as the railroad and its locomotive reaches its last car (like rotating ring) “smooth” Einstein – synchronization along the whole train would not be possible; it would give a non vanishing time difference that depends on the direction of used.

Not the answer you're looking for? Browse other questions tagged special-relativity reference-frames time-dilation or ask your own question.