The following text is from the book "Concepts of Physics" by Dr.H.C.Verma, from the chapter "Rotational Mechanics", under the topic "Torque of a Force about the Axis of Rotation":

To obtain the total torque, we have to get separately the torques of the individual forces and then add them.

The statement "But that won't always work" made me think of different cases where finding the net force to find the net torque would work or would not work. One of the cases for which I was unable to determine whether this would work or not is as follows:

Please Note: The question - Net torque on an object when when all the forces pass through a common point is related to that of mine, but it doesn't address whether we could use the alternate method of finding the net torque. The question/answer there uses the conventional (always working) method to determine the net torque.

One example, consider such lever system : 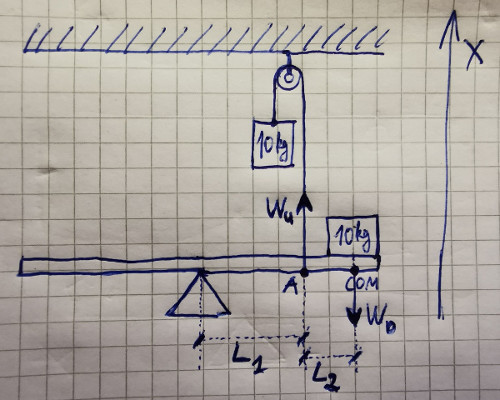 8
Difference between torque and moment
0
Net torque on an object when when all the forces pass through a common point
2
Is net torque is not zero about all points on the rod for a linearly accelerating rod?
0
Equilibrium of a body in torque problem
0
How is the torque about any two reference points (in the system) when a body is in translational equilibrium of same value?
0
Angular momentum and torque meaning
15
Can the value of friction force ever exceed value of applied force?