How is a horizontal sunset possible? [closed] 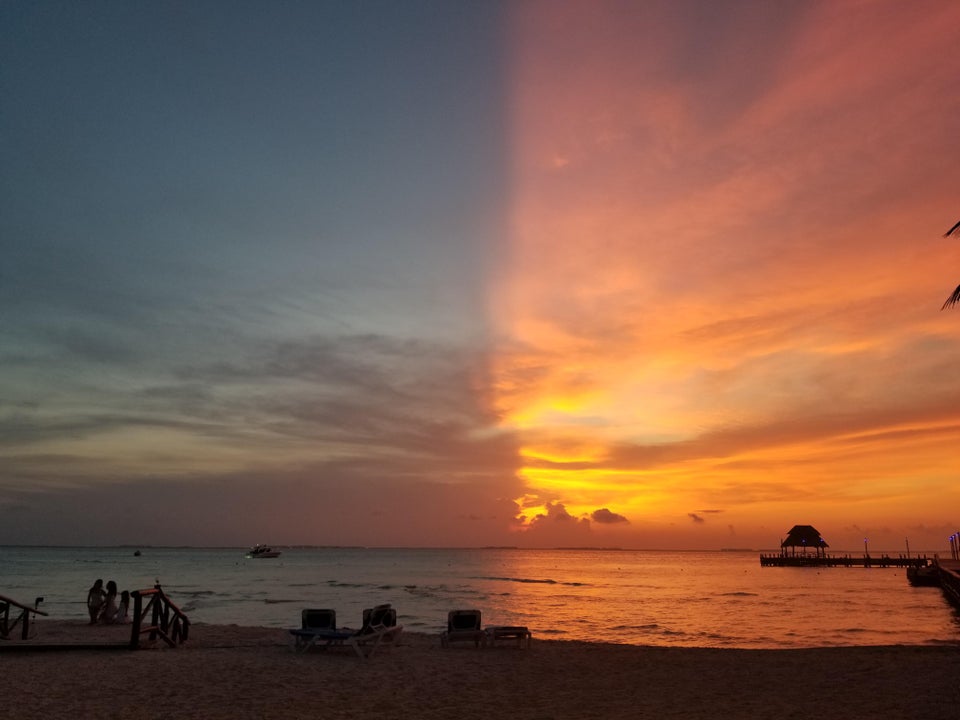 Normally, sunset moves vertically, from up to down in the sky. But in this photo, it appears to be moving horizontally, from left to right. It might be an instant of a phenomenon related to scattering of light.

If it is important, the location is Isla Mujeres, Quintana Roo, México according to the original poster.

How can we explain this phenomenon?

I did some research and it might be related to a passing jet stream disturbance that occurs in middle latitudes where low, thick stratus clouds are moving west to east and it happens to be happening during the sunset. Of course, the location of the observer is important as he is far enough not to see the clear strip near the horizon. At the dark side, the clouds are covering enough area to block the sunlight for the observer.

I've tried to draw in Paint also as below: 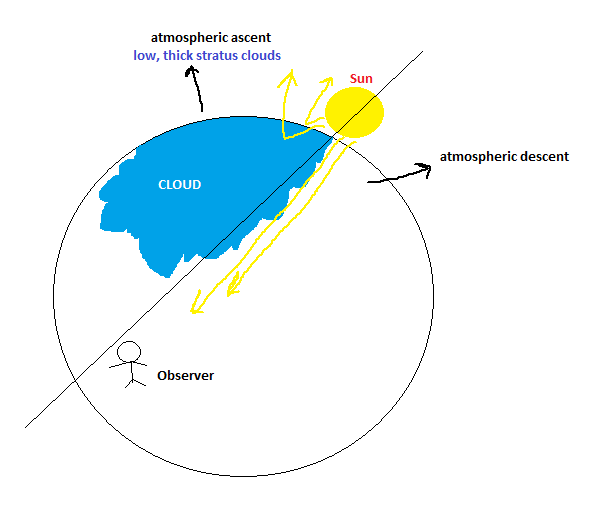 Please correct me if I'm wrong.

It looks like the shadow of a mountain. There are lots of photos of this type at Atmospheric Optics.

Isla Mujeres is just to the east of the northeast corner of the Yucatan Peninsula, off Cancun. Due west from the island is a long stretch of east-west coastline, with land to the south and sea to the north. If the sun has set behind the hills and forests on the peninsula but is still above the ocean, it would produce this kind of shadow.

Figuring out exactly what's casting the shadow would require not only knowing the location of the photo but also the date; the sunset is due west in September and March, in the west-by-northwest in the summer, and in the west-by-southwest in the winter. If the photo was taken in late July (Reddit says "100 days ago," but that's the date of the post, not necessarily the photo) then there is a stretch of about 30 miles of coastline from Rio Lagaritos to El Cuyo to Chilqilà which is pretty much straight, points right at Isla Mujeres, and might cast this type of shadow: land to the left, looking west, and sea to the right. But for the peninsula to cast this shadow on the clouds requires the sun to be quite low; in the photo the coasts of Cancun and Isla Blanco to the west are visible on the horizon if you zoom in.

It's tricky to figure out what it's a shadow of, but straight lines in the sky like this are almost always shadows of land features.

See this similar photo where the shadows are attributed to a thunderhead, in line with your suggestion about the shadow coming from a cloud.

Not the answer you're looking for? Browse other questions tagged visible-light scattering atmospheric-science sun or ask your own question.