Is the defintion of *inertial reference frame* given by Blandford and Thorne acceptable?

Edit to add: A simple explanation of my objection to Blandford and Thorne's definition of inertial reference frame (which they use synonymously with inertial frame) is that, if I'm in free float, sitting is the seat of a spaceship, and I feel a force acting on me, that informs me that I am changing inertial frames. I don't need a latticework of clocks and rulers to make that assessment.

I also intended to add that what Blandford and Thorne are setting up, if it also is equipped with detection devices and data recorders colocated with each clock, is what I call an observer system. Such a system is sometimes simply called an observer.

The following is from Modern Classical Physics: Optics, Fluids, Plasmas, Elasticity, Relativity, and Statistical Physics, by Kip S. Thorne and Roger D. Blandford. And I find it contrary to my understanding of what an inertial frame of reference is. 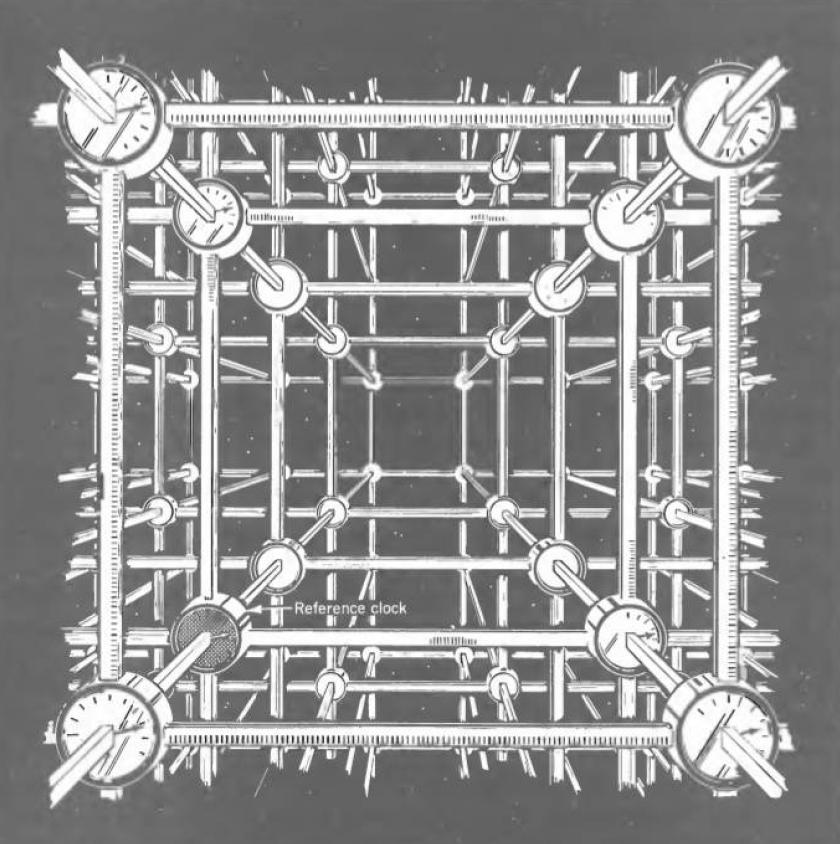 An inertial reference frame is a 3-dimensional latticework of measuring rods and clocks (Fig. 2.1) with the following properties:

Compare this to the original formulation of inertial system, given by Ludwig Lange in 1885 prefaced by:

Newton's absolute space is a phantom which should never be made the basis of an exact science.

From Inertia and Gravitation: The Fundamental Nature and Structure of Space-Time

Definition I. 'Inertial system' is called any coordinate system of the kind that in relation to it three points $P;P^{\prime}; P^{\prime\prime},$ projected from the same space point and then left to themselves--which, however, may not lie in one straight line--move on three arbitrary straight lines $G;G^{\prime}; G^{\prime\prime},$ (e.g., on the coordinate axes) that meet at one point.

Theorem I. In relation to an inertial system the path of an arbitrary fourth point, left to itself, is likewise rectilinear.

Definition II. 'Inertial timescale' is called any timescale in relation to which one point, left to itself (e.g., P), moves uniformly with respect to an inertial system.

Theorem II. In relation to an inertial timescale any other point, left to itself, moves uniformly in its inertial path.

To my understanding, Lange is not requiring any specific set of points (point masses), he is merely stating a minimum requirement for empirically determining an inertial system. He indicates that they may move along coordinate axes, but that is not necessary.

My concept of an inertial frame (of reference) is far more abstract than that given by Blandford and Thorne, and I consider it to be fundamental to physics. So here I am, challenging a guy with a Nobel Prize in Physics for his work in General relativity, regarding the foundations of the same.

There are many ways I might try to communicate what I mean by inertial frame. I'll use this one. An inertial frame is a family of parallel world lines filling Minkowski spacetime. It is a priority geometric entity in the same sense that point, line, plane and space are in Euclidean geometry. By "priority geometric entity," I mean that it exists prior to coordinatization.

Blandford and Thorne are, in my assessment, defining a coordinatization of an inertial reference frame. This wouldn't be worth posting about if it were not for the fact that the book's target audience is graduate students of physics, and professional physicists. Furthermore, the very emphatic thesis of the book is 'real physics is geometrical'.

Am I right to contest Blandford and Thorne's definition of inertial reference frame?

You can contest the Blandford and Thorne definition as being unnecessarily specific. They do not define a general inertial reference frame, but a specific conceptual model of one. As you say, there is no reason to posit the existence of imaginary clocks etc. There is also no requirement, generally, for the spatial axes to be orthogonal or to each have the same units (although ditching those requirements will make a reference system more difficult to use).

You can also criticise it for being internally inconsistent. For example, it says that the lattice is purely conceptual, but goes on to say that it has an arbitrarily small mass-- a purely conceptual lattice would have no mass.

Phrases such as 'the clock that does the bouncing' are atrocious English.

Hopefully by now you get my drift. Physics is a discipline in which the loose or ill-considered use of language is a menace to comprehension. Almost every science book I have read suffers from some essential ambiguity as a result of its author taking insufficient pains to make their meaning utterly clear, and many of the questions on this forum are a lamentable symptom of that tendency.

An inertial frame is a family of parallel world lines filling Minkowski spacetime.

'Inertial system' is called any coordinate system of the kind that in relation to it three points P;P′;P′′, projected from the same space point and then left to themselves--which, however, may not lie in one straight line--move on three arbitrary straight lines G;G′;G′′, (e.g., on the coordinate axes) that meet at one point.

(Paraphrased, and eaving out some of the details): we have a latticework of clocks and rulers, with the clocks synchronized by Einstein synchronization.

Definitions 2 and 3 are operational definitions. This is from a philosophical school called operationalism, articulated by Percy Williams Bridgman. They spell out the operations needed to measure a thing, and this is taken to be a definition of the thing. Definition 2 is, with historical hindsight, a sloppy operational definition, because it implicitly talks about time and motion, but it assumes that time operates in a trivial way that hardly even needs to be discussed.

Definition 1 is not an operational definition. That isn't necessarily a bad thing -- not all definitions have to be operational -- but it makes it possible for it to contain hidden ambiguities. Depending on what is understood by "Minkowski spacetime," this definition might or might not imply a lot of assumptions about how the spacetime behaves, what mathematical apparatus is associated with it (a connection?), and so on.

If I wanted to nitpick about definition 1, I could complain that you haven't specified that the lines be timelike, you haven't said whether they're directed lines, and you haven't said anything about an orientation of the observer, which in general is part of what we mean by a frame of reference. If you fill in some of this, you will end up with something like the notion of a frame field.

As a matter of style, I would prefer to disentangle the notion of a reference frame from other assumptions, such as that spacetime has a bilinear metric rather than a degenerate metric as in Galilean relativity.

You seem to assume that it is automatically meaningful to talk about whether distant lines are parallel. This is actually not true in a curved spacetime. I guess this is covered by the reference to Minkowski space, but this happens in a way that sweeps a lot under the carpet. The intention of definition 3 seems to be not to sweep anything under the carpet.

Blandford and Thorne are, in my assessment, defining a coordinatization of an inertial reference frame.

Sure, but this is a very natural way to describe Minkowski space, which has the structure of a vector space with certain preferred choices of basis, and a clear one-to-one correspondence between the choice of basis and the choice of a frame of reference.

Not the answer you're looking for? Browse other questions tagged special-relativity classical-mechanics inertial-frames definition geometry or ask your own question.