What happens to the momentum of earth-ball system when a ball is thrown upwards?

I would refer to linear momentum wherever I have used the word momentum.

I saw a question which was given in my textbook:-

When a ball is thrown upwards from the surface of earth,then:-

Answer:- (3) Earth and ball move away from each other to conserve momentum.

Following is the sequence of events which a I went through:-

I read the question and tried to solve it.I thought that the answer would be none of these because first of all question is quite unclear because it does not describes that in which way the ball is thrown upwards?I thought of the following specific case:- 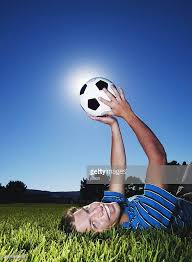 In this image a man is holding a ball in his hand.He may throw it upwards.

With these thoughts I supposed that linear momentum of this system is not conserved.

At the very next moment I assumed that the man is massless(having negligible mass),then the normal reaction between earth and man vanishes but there is still a net external force which is the force exerted by man's hand on ball.

With analysis I concluded that momentum of system is not conserved.

I asked my teacher about my assumptions.He said they are correct but he said that the momentum is still conserved.He told the reason that when the ball is thrown upwards then the contact time between hand and ball is very small as well as the contact force is too small such that the impulse imparted to the system is very small which can be neglected.

I again analysed my teacher's arguments and concluded:-

With these arguments I am quite confused whether the linear momentum will be conserved or not?

Momentum is always conserved. If someone throws a ball upwards they impart a force on the ball. There is a corresponding reaction on the Earth through their feet. You can see this if you throw a ball upwards while standing on some scales- your weight will seem to momentarily increase. The momentum that the ball gains is offset by a change in the momentum of the Earth. However, as the Earth's mass is so enormous compared with that of the ball, the corresponding change in the Earth's velocity is utterly negligible. Practically answer 2) is correct. The more abstract among us might prefer answer 3, while the relativists might argue that the two answers are indistinguishable mathematically.

with both the objects at the start possessing the same momentum. Hence law of conservation of momentum is not violated.

Not the answer you're looking for? Browse other questions tagged homework-and-exercises newtonian-mechanics reference-frames momentum conservation-laws or ask your own question.

0
Throwing a ball causes Earth to move away

4
When to consider friction as an impulsive force?
0
If I throw or kick a ball, how much will the Earth move in the opposite direction?
2
During a collision, why is momentum not conserved in a participant's frame of reference?
4
Throwing a ball from the surface of the earth so that it ends up in a circular orbit
0
Why doesn't the coriolis force cancel out when a ball is thrown up?
4
If a ball is thrown to a person standing on a frictionless surface, is the impulse of the thrower equal to that of the catcher?