What is the difference between an undulator and a free-electron laser (FEL)?

I am very confused by the graphic below: In particular, why are undulators and FEL separated?

Furthermore, I do not quite understand how the intensity values come to be: 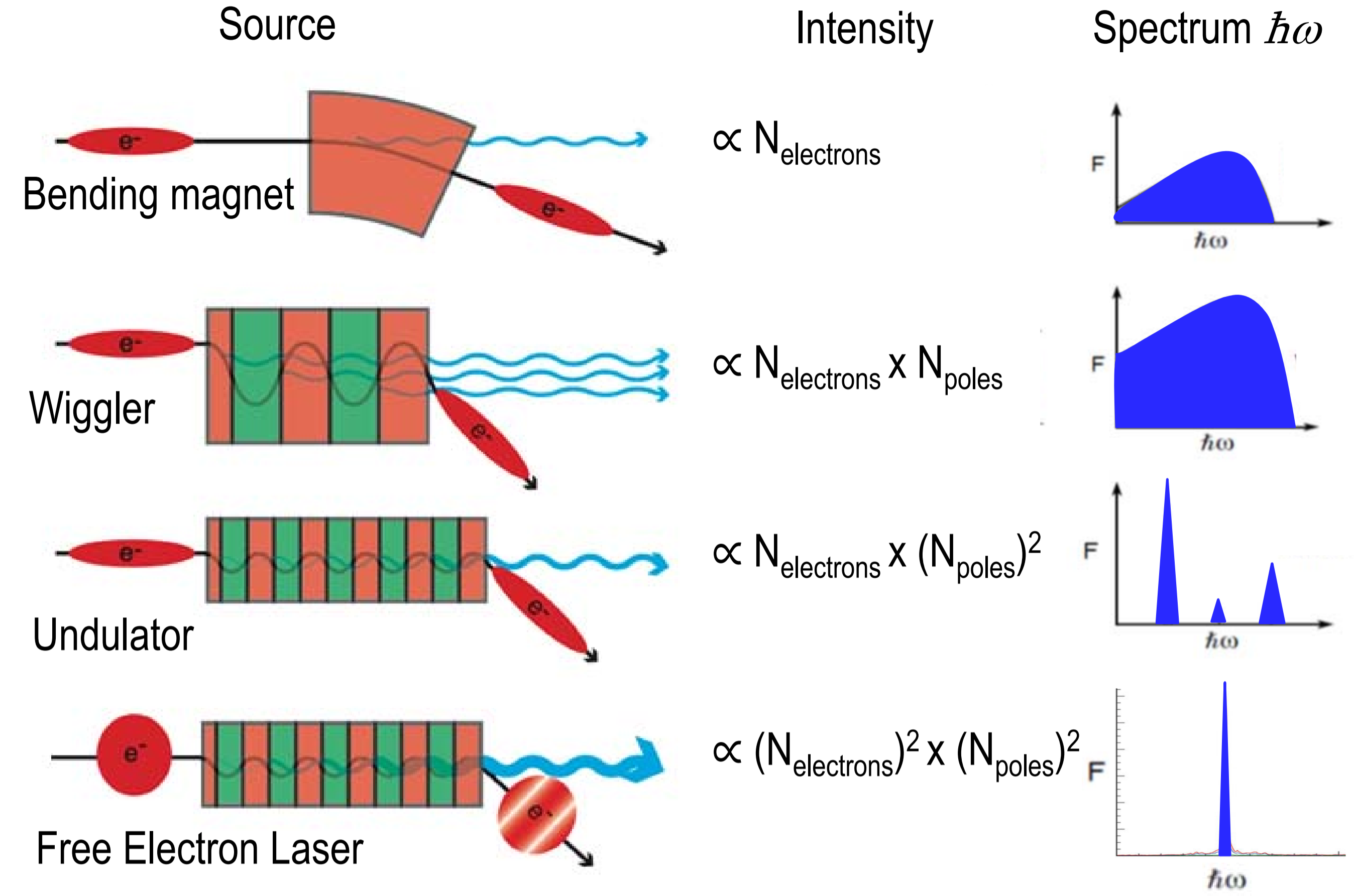 In a wiggler there is no coherence.

In an undulator there is coherence between the emission from the different bends but the individual electrons do their own thing.

In an FEL there is also coherence between the emission from the different electrons. The radiation from an electron is in phase with that from all the others.

The wiki is good for compact definitions .

An undulator is an insertion device from high-energy physics and usually part of a larger installation, a synchrotron storage ring, or it may be a component of a free electron laser. It consists of a periodic structure of dipole magnets. These can be permanent magnets or superconducting magnets. The static magnetic field alternates along the length of the undulator with a wavelength ${\displaystyle \lambda _{u}}$. Electrons traversing the periodic magnet structure are forced to undergo oscillations and thus to radiate energy. The radiation produced in an undulator is very intense and concentrated in narrow energy bands in the spectrum. It is also collimated on the orbit plane of the electrons. This radiation is guided through beamlines for experiments in various scientific areas.

A free-electron laser (FEL) is a kind of laser whose lasing medium consists of very-high-speed electrons moving freely through a magnetic structure, hence the term free electron. The free-electron laser is tunable and has the widest frequency range of any laser type, currently ranging in wavelength from microwaves, through terahertz radiation and infrared, to the visible spectrum, ultraviolet, and X-ray.

It is obvious that the undulator provides an electron beam for further experiments and a free electron laser an electromagnetic beam for experiments. Both setups use a periodic in space magnetic field to induce curvature changes and radiation, but in the undulator the working beam is electrons, in the free electron laser it is photons in specific frequencies and with specific coherence, seen in a lazing action.

Undulator photons are incoherent. FEL photpns are coherent, and the details are in the links, and links provided there. It is reasonable that the two outputs of the same geometry, photons and electrons, will be different in the two cases.

I expect that the squaring of the number of electrons comes because in the FEL ( and not in the undulator ) mirrors are used (or a laser) to create electron bunching so that the radiations becomes coherent. One would have to delve in the mathematics.

Not the answer you're looking for? Browse other questions tagged particle-physics synchrotron-radiation free-electron-lasers or ask your own question.