I was reading about mean free path equation derivation online and stumbled upon this:

We will derive the equation using the following assumptions: let’s assume that the molecule is spherical, and the collision occurs when one molecule hits another, and only the molecule we are going to study will be in motion and the rest of the molecules will be stationary.

Let’s consider our single molecule to have a diameter $d$ and all the other molecules to be points. This does not change our criteria for collision, as our single molecule moves through the gas, it sweeps out a short cylinder of cross section area $πd^2$ between successive collisions...

To be clear, I read that here (under the section 'Derivation of Mean Free Path').

The cross-sectional area is indeed $A_c = \pi d^2$ but the explanation on this page is not precise in this regard. You basically consider a single particle of diameter $d$ and its collisions with other particle of the same size.

Just think of it that way: What is the neighbourhood of a particle that another particle with the same radius would have to be in for a collision? Obviously they would collide if the two radii would touch or the distance would be smaller. Thus $\pi (2r)^2 = \pi d^2$ is the area the center of the second sphere must lie in for a collision between the two particles. 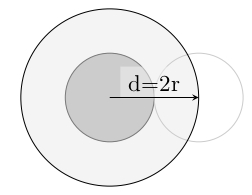 More generally in three-dimensional space one has to consider the area perpendicular to the relative velocity of the two particles. And integrate over this cross-sectional area

depending on the position of the two particles. Introducing an angle $\psi$ in between the line connecting the two centers and the relative velocity can be calculated according to

Well the area would be $πr^2$ if the molecules collided head-on or say an exact overlap happens between the colliding molecules. But you have to consider that a successful collision is one where even when the 2 molecules scrape by, it is termed a collision (so its different from our daily use of the word collision where it often means 2 bodies colliding with significant overlap of the area)

So pictorially, this is also a collision. Hence the area we take is πd2 that takes into account the cross sectional area of 2 molecules. 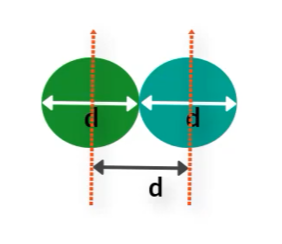 7
How does hot air rise?
4
Motivation for pressure term in fluid approximation
3
Collision Term in the Classical Boltzmann Transport Equation