Suppose we do this experiment in a vacuum, will the small pieces of paper behind the bottle be blown? [closed]

Put a lit candle behind abottle. If you blow on the bottle from the opposite side, the candle may goout, as if the bottle was not there at all. Explain the phenomenon.

My vacuum here refers to the space beyond the atmosphere. 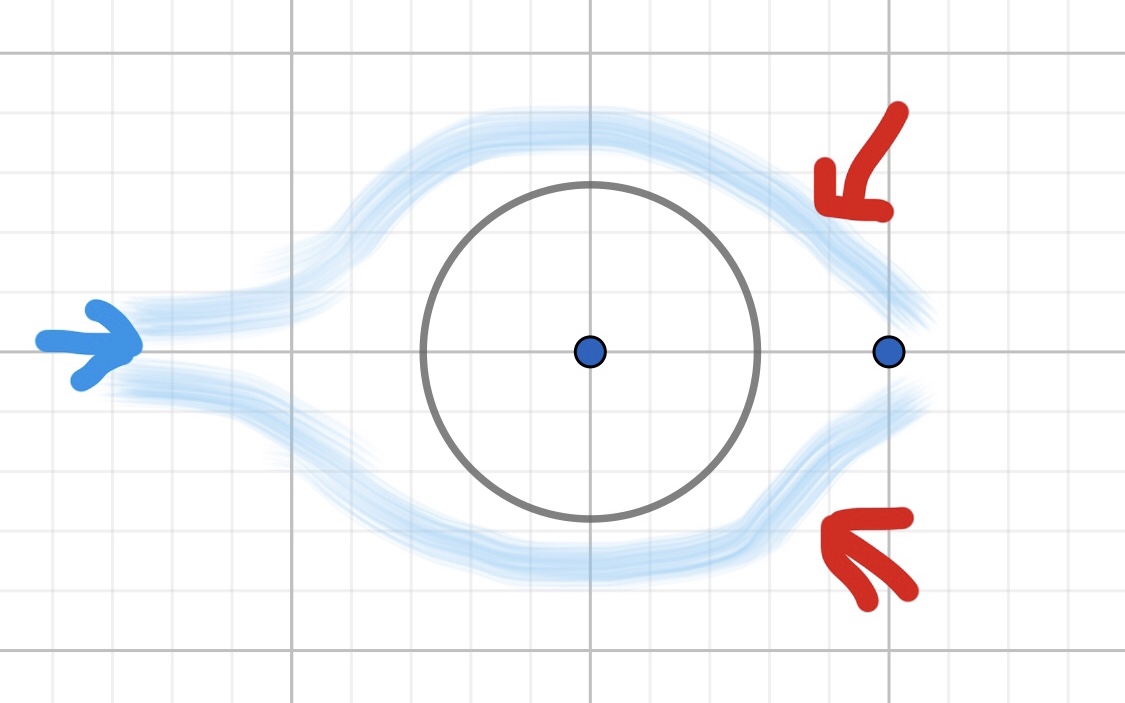 There is no atmosphere or atmospheric pressure in the vacuum, so the blown air will no longer move along the surface of the bottle, so it will not blow the small pieces of paper behind the bottle.

So, by both approaches there will be a potentially small disturbance behind the bottle. The question is simply, which stream of air will give enough disturbance to move the pieces of paper. There is always some breeze - so a sufficiently light paper will be blown.

First of all your question is very vague and open to multiple interpretations. Secondly it lacks physical context. Thus I would like to point out the following two things.

Aerodynamics of the flow around a cylinder

What you stated about the flow around a cylinder is only partially true. The fact that the flow might reattach to the cylinder is not caused by pressure but instead by viscosity. The entire space of a continuum is filled with a continuous mass. Thus the pressure can't lead to a reattachment of the flow - there were particles there the whole time. "Atmospheric" pressure is not a mighty external force, instead it is a measure for how much mass is squeezed into a given space and how fast the corresponding relative motion of those particles is. The important part for reattachment is the sole presence of particles and how these particles interact by means of shear forces. It is similar to rigid mechanics: No matter how hard you press together two plates as long as the friction coefficient is zero there will be no friction force. The "friction coefficient" of a fluid is the viscosity $\mu$ and thus basically describes the diffusion of momentum, how shearing layers transfer their momentum. Just take honey and air as examples: With the same static pressure their flow and reattachment to the cylinder will be different. As a consequence the flow in the wake of a cylinder for a continuum will be significantly more complex than what you would expect. Just because the geometry and boundary conditions are symmetric that does not mean that the solution will be. Depending on the flow regime there will be a perfectly symmetrical solution, an asymmetric steady state solution with standing vortex pairs and various types of oscillating von Kármán vortex streets. All the regimes are sketched here.

As you can see it really depends on the flow regime (fluid, velocity and length scale) if your candle will be blown out or if it would continue burning in a continuum flow.

Flow in a "vacuum"

Vacuum is by definition space characterised by an absence of matter. So all we know about continuum flow (such as the Navier-Stokes equations) does not hold at all, there is nothing to flow: Mass flow and absence of matter are clearly contradictory concepts. Your piece of paper won't move, your candle won't be blown out - assuming your candle supplies also an oxidiser for the combustion reaction in the first place.

If you slowly lower the static pressure starting from a dense gas that can be described as a continuum (characterised by a Knudsen number $Kn \lesssim 0.01$), your gas will become slowly more dilute, the particles won't stick anymore to the wall: The no-slip condition will not hold anymore and instead you will be left with a slip condition ($0.01 \lesssim Kn \lesssim 0.1$). The fluid will start to behave like single particles moving like billiard balls according to Newton's laws (transitional $0.1 \lesssim Kn \lesssim 10$ and free molecular flow $Kn \gtrsim 10$): They will collide with each other and their surroundings and that will be the only source of momentum that could move your piece of paper.

If you blow air into a vacuum it will no longer be a vacuum, so yes there will be atmospheric disturbance.

Not the answer you're looking for? Browse other questions tagged homework-and-exercises fluid-dynamics pressure lift or ask your own question.

7
Deriving Stokes' law ($f_v=6\pi\eta Rv$) in a simple way
0
How do the vortices in vortex-induced vibrations (VIV) form?

8
Atmospheric pressure experiment using a cup with a fluid to hold a glass plate
4
Why dont we consider force exerted by atmospheric pressure in mechanics?
1
Why does a glass bottle completely filled with water not break when hit on a nail?
0
Hole in a water bottle
6
Why do the bubbles in the water cooler get larger as the level gets lower?
3
Is there a Coandă effect outside the atmosphere?
7
Why did water not drip form this small bottle?
1
What caused the air bubbles on the bottle wall to move downwards?
0
Question about "suction" , and overall physics, in this Whoosh Bottle Experiment