Acceleration-time graph for a falling object

I understand that when drawing an acceleration-time graph for a falling object (with initial velocity = 0), the y-intercept should be $9.81ms^{-2}$ and acceleration should end up being $0ms^{-2}$ as it reaches terminal velocity.

However, I do not understand why the rate of change of acceleration should be decreasing (as shown in the graph below).

Can someone explain to me why the rate of change of acceleration changes rather than the graph being a straight line? 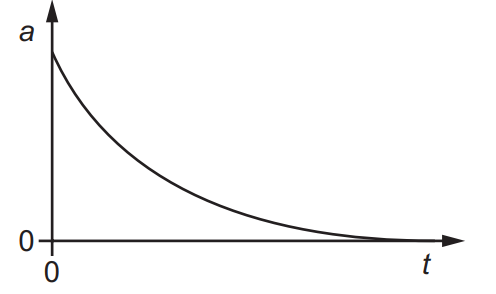 A similar result can be obtained if the frictional force is proportional to the speed squared etc.

In an ideal scenario, yes it would be straight, but in this case, you have to take into account drag forces present. Drag force $F_D=C_DA\frac{\rho v^2}{2}=kv^2$, where $k$ is some constant. As such, for an object vertical falling motion, velocity increases, and that means drag force increases at an increasing rate. (Consider a $y=x^2$ graph).

Since you don't mention the medium that the object is falling in, one could assume the medium is air, but it also could be falling in a liquid. In either case, since air can be (is) treated as a fluid, the object is affected by drag, which is a type of friction or force acting opposite to the relative motion of the object and is proportional to the square of the velocity of the object.

The drag coefficient depends on other factors (the shape of the object and on the Reynolds number).

What this all means is that, as the object accelerates (i.e. speed increases), the force (drag) opposing the acceleration increases with the square of the speed, resulting in a non-linear nett acceleration over time.

Let's assume that the drag force is given as $$F_{drag}=-bv$$ then the net acceleration is given as $$a=g-\frac{bv}{m}$$ now differentiate this equation with respect to time then,$$\frac{da}{dt}=-\frac{ba}{m}$$ Now it is clear from this equation that the slope is negative and the curve falls according to the given equation:- $$a=exp(\frac{-bt}{m})+constant$$.

Not the answer you're looking for? Browse other questions tagged homework-and-exercises newtonian-mechanics kinematics acceleration or ask your own question.

1
What is the difference between negative acceleration and decreasing acceleration?
3
Why is acceleration constant in this example?
4
Why is the relationship between velocity and radius curved, in circular motion?
0
Velocity time graph for a ball thrown vertically upwards and falling back down to be caught again by a person
1
Why does tangential acceleration change in value?
1
Instantaneous changes in acceleration
3
1D falling object, and terminal velocity
0
Acceleration of a Bouncing ball when it hits the ground