Why does smoke go out the window of the car - and what if there's wind blowing instead of the car moving?

When driving a car while smoking with the window open (safety and legal issues aside), I've noticed that the smoke tends to go outside the window.

It is called Venturi Effect.

The increase in speed of the air surrounding your vehicle comes with a decrease in pressure. That explains too why a chimney works better in windy days.

The Venturi effect is explained by applying the Bernoulli Equation (say, the conservation of energy of a small piece of fluid that moves within the flow) between two points along a streamline (in this case, we would follow a piece of air in a tunnel wind) 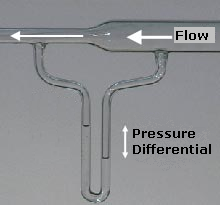 Note the similarity with the high school equation for the conservation of mechanical energy of a particle:

(Just change the mass of the particle for the mass of a fluid volume unit, i.e. density, and add an additional summand to accout for the pressure, and you have Bernouilli's equation)

Bernouilli's equation is meant for an incompressible flow (water) which here means that the numerical results would be approximate, but qualitatively the same effect happens.

A related, interesting fact, is that submarine propellers must be carefully designed, in order to avoid points in which water suffers much too rapid a speed increase. When that happens, pressure becomes so low in that points that vacuum bubbles appear. The power released by the implosion of that bubbles against the surface of the propeller, not only is noisy, but also may damage the propeller itself. The phenomenon is called cavitation. 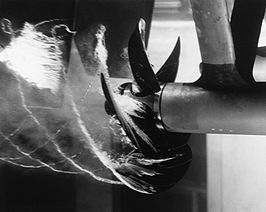 There is no difference in the fluid dynamics of this problem (may not always be true as boundary layers may be different, but that's not a factor really here) if the car is moving forward at speed $V$ into quiescent air or the car is stationary with a wind moving towards it at speed $V$. It's just a change of reference frame which in this case isn't an issue.

Now for the actual hard part...

Your car is not going fast enough to make the flow compressible so we can assume it isn't. We can also assume that the flow doesn't have heat added/removed and for the most part inviscid. This all means that the flow is adiabatic and reversible, aka isentropic.

Now, because it's incompressible and isentropic, we can define the total pressure as:

which is Bernoulli's Principle where $P_0$ is the total pressure, $P_s$ is the static pressure, $\rho$ is the air density and $V$ is the air (or car) speed. Since the left hand side is constant, this tells us that as we go faster the $\frac{1}{2}\rho V^2$ term gets bigger which means $P_s$ gets smaller.

To the first question: no idea, honestly. My intuition says that air should come by the front windows and out from the rear ones. Probably air creates difference of pressures in the neighboorhood of the window and suck air out, just like a vaccum cleaner: it sucks air by making it go out... Making theoretic studies may be very difficult, but if we could see a wind tunnel simulation with windows opened we may see what air is doing there.

To the second question: definitely yes. The two situations are actually the same, that's why they use wind tunnels to test aerodynamics of cars instead of getting them out in tracks (they also do it, but for driving stuff rather than aerodynamics).

The air flowing around the outside of your car near the windows will be at a reduced pressure due to the Bernoulli effect. There will also be some sort of vent letting air into the cabin, the vent intake must be located at a point in the airflow where you have higher stagnation pressure, so you get a net flow going in the vent and out the window, I'm guessing.

14
Bernoulli's equation and reference frames
3
Why does smoke go inside the car if the back door is open?

14
Bernoulli's equation and reference frames
3
Why does smoke go inside the car if the back door is open?
7
When driving uphill why can't I reach a velocity that I would have been able to maintain if I started with it?
26
Why does my door shut faster when the window is open?
1
Car window vibrating noise
2
Patterns in falling viscous fluids
5
Why does my rear window defogger remove rain?
3
Does Bernoulli's equation describe why my curtains stick to the mesh?