Equations for the two-plane model of the greenhouse effect

I'm trying to understand this "toy model" of the greenhouse effect.

The model predicts the surface temperature of the Earth given the sunlight intensity and the emissivity of the atmosphere, $\lambda$. To do this, they use a two-energy model of light. There's shortwave radiation from the sun, and there's thermal radiation from terrestrial sources. They way they define $S$, the radiation intensity from the sun, allows for the atmosphere to reflect some shortwave light back into space, but the model doesn't allow for the atmosphere to absorb any shortwave light, meaning that all of $S$ makes it to the ground. Then the ground is treated as a blackbody. It logically follows that it emits radiation of intensity $G$ upwards, of which $\lambda G$ is absorbed by the atmosphere. Atmosphere emits $1/2 \lambda G$ back down to the surface because it is also a blackbody.

What I don't understand is the complexity they seem to invoke to write equations describing this. They use equations for surface, atmosphere, and planet.

These are 3 equations, but aren't there only 2 unknowns?

My question: how do you draw the necessary system boundaries to get closure for this system? Also, is there a requirement on the temperature of the atmosphere? I think the source argued that it need to be cold for it to have insulation properties, but I don't think that's reflected in the math, since we require (radiation in) = (radiation out). That would seem to imply the temperature of the atmosphere is arbitrary.

The third equation is just a sum of the two first:

Add them up and get:

which is the third equation. So, still only two independent equations and two unknowns.

You have stumbled upon one of the many inconsistencies of the Greenhouse Effect Theory. Another one (that's been acknowledged but very seldom described) is that as the the Sun heats the Earth, then the Earth heats the atmosphere, then some (about 1/2) of that newly hot atmosphere radiates back to Earth and heat that up . . . .When does that process ever stop, and what stops it - is there some kind of diminishing return? Nobody really likes talking about it.

However, to add some light on your question - what you are assuming (and is just taken as read) is that these radiation fluxes can be added. See the diagram below (Washington State I think): 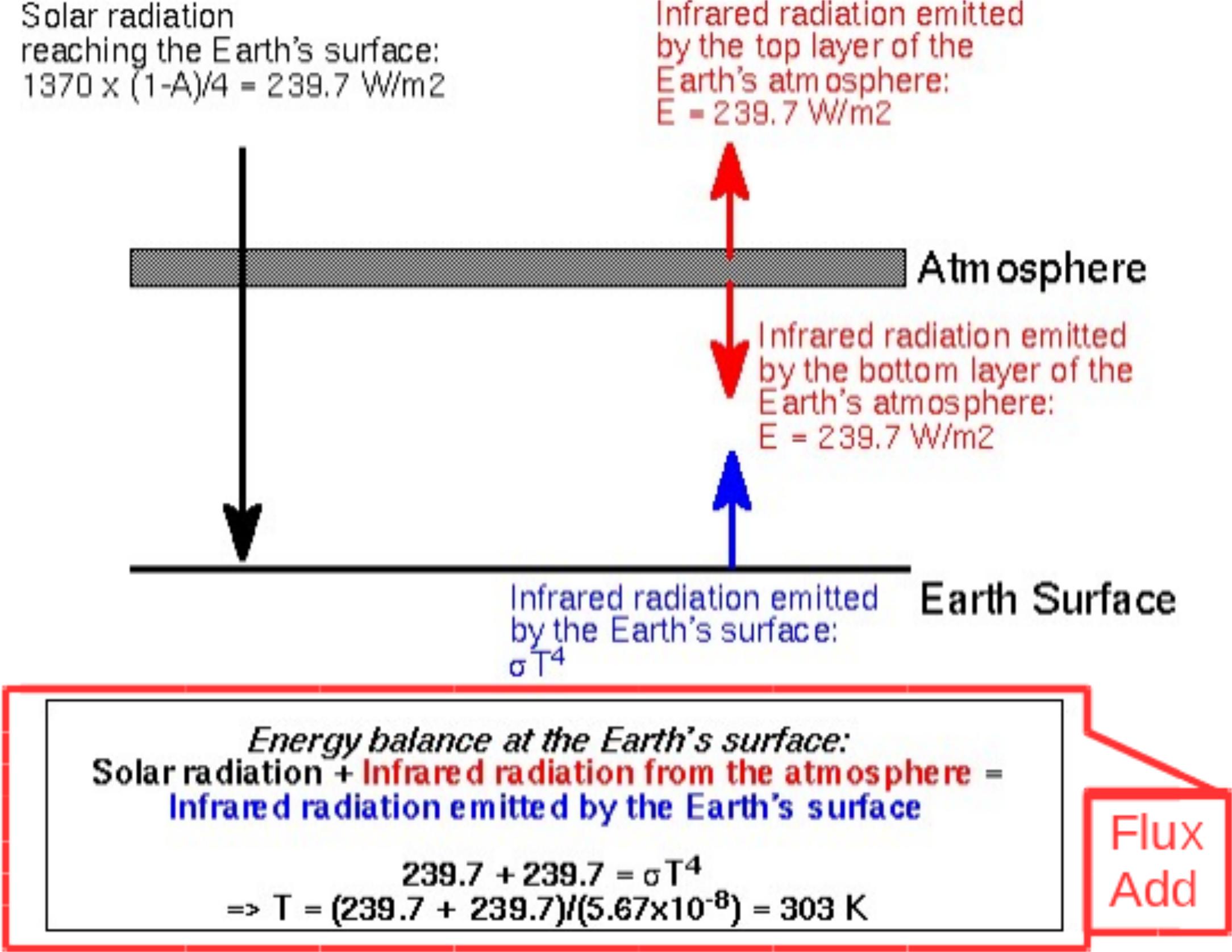 However, strange as it may seem, fluxes cannot be added at all. It is the same as temperature - you can't add them either. There are no examples in the natural world of fluxes being added together - none. The flux-add idea contravenes the 2nd Law of thermodynamics.

For a short at home experiment and some theory - go here: Fluxes cannot be added experiment All I ask is that if you do a similar experiment, you post your results for all to see, or failing that email them to me on the PDF email.

John Murphy simply asserts that "fluxes cannot be added." He doesn't explain why, if you have two energy sources, they're not both imparting energy. Suffice to say that in real life, the greenhouse effect does not violate the second law of thermodynamics, and that one should get one's science from scientists and not from internet crackpots.

Sun warms the earth system. It emits infrared radiation. This cools the surface. It is less warm. GHGs absorb some of it, and emit - ignore collisions for now - infrared radiation in all directions. One is back to the surface. The surface absorbs it and some of the lost warmth is restored. Rinse and repeat many many times. This process slows the loss of infrared radiation to space at the earth's radiating level; this increases the heat content of the earth system. (Confirmed by persistently increasing ocean heat content; melting ice; retreating frostlines; rising sea level, etc.). Adding CO2 to the atmosphere, emissions, raises the earth's radiating level, so the surface has to warm in order to achieve energy in (shortwave from the sun) equaling energy out (infrared radiation, mostly from CO2 in the upper atmosphere). No laws are violated. GHGs are not an additional heat source to the sun. Essentially all "in" energy is from the sun. Energy out is increasingly less the initial infrared emitted by an absorbed solar photon and increasingly more recycled infrared photons. Remember, with no GHGs in the atmosphere, almost all radiation to space would be a photon emitted as the direct result of absorbed solar. No rinsing and repeating. Earth would be mostly ice covered, which would also be the earth's radiating level.

Not the answer you're looking for? Browse other questions tagged atmospheric-science thermal-radiation climate-science or ask your own question.

10
Why is the surface of Venus so hot?
1
Temperature of a black-body in LEO on the dark side of the Earth
3
Calculate temperature of the earth through blackbody radiation
10
Do gases reflect some IR radiation?
2
Blackbody or characteristic emission of radiation
105
Explain it to me like I'm a physics grad: Greenhouse Effect
1
Is the ocean guaranteed to warm in a warming climate?
0
Why does a solar oven need a transparent lid?
0
Why can the hole of a cavity-hole model be considered a radiating blackbody?