Why is blackbody radiation continuous?

I will preface this by saying I am not a physicist and have not taken a course on spectroscopy but I had some basic questions as I work with IR spectroscopy.

Is it accurate that photons are only emitted during electron transitions? I ask as during IR spectroscopy IR radiation is absorbed by specific molecular vibrations not electronic excitation. Also why is the spectrum from blackbody radiation continuous? Isn't it also due to electrons moving between energy levels? What is the mechanism for blackbody radiation? I understand that temperature can affect molecular vibration but what about translational, rotational and electronic excitation? 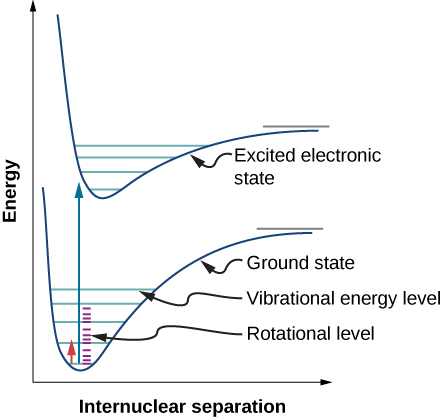 Also in the picture I understand that the dissociation energy can be obtained by the height of the peak essentially going from E0 Einf but what is the mechanism to jump vibrational energy levels? can temperature cause a jump or just IR radiation?

why is the spectrum from blackbody radiation continuous?

Blackbody radiation is continuous because the frequencies photons can have form a continuous spectrum.

The way the blackbody formula is obtained is by assuming that the energy in light is given in terms of its frequency $E=\hbar\omega$ (at the time Planck proposed it, he didn't think about light being made up of particles at all, it was Einstein who later interpreted this formula as saying light is made up of packets).

The core idea that makes this work is that Planck then assumes that, for some reason, light can be in thermal equilibrium with matter (at a given temperature $T$). The probability to find a wave (photon) with a given energy is then the same as it would be for any particle, proportional to a Boltzmann weight $\exp(-\text{energy}/k_B T)$ where $k_B$ is a constant (Boltzmann's constant).

With a bit of math you get to expectation value of the energy for any frequency (in a box with periodic boundary conditions):

After an integral over the space of wavenumbers you arrive at the final formula for blackbody radiation,

this gives you the energy radiated by a hot (black)body at a given temperature $T$, as a function of the frequency $\omega$. As you can see we needed to place no restriction in the values for $\omega$ (technically we did, but only for the expectation value, you take a limit of infinite size later and the restriction disappears), and that's why the distribution is continuous.

I said as much, but also notice that what we used is the expectation value, that is the average energy in that frequency. In reality both atomic (electron) and vibrational (phonon) states have discrete energy spectra, so that the energy absorbed and emitted comes in packets with the value of the gaps between energy levels (very similar to what is shown in your image).

Is it accurate that photons are only emitted during electron transitions?

I would say yes. Both the bound and free electrons emit photons when they make a transition (since the temperature is above absolute zero, fluctuations will make it so that you always have some free electrons). The bound electrons have a discrete energy spectrum but the free ones don't, theirs is continuous. But indirectly vibrations in the material can also affect the emission of photons via electron-phonon interactions (phonons are the quanta of vibrations).

what is the mechanism to jump vibrational energy levels? an temperature cause a jump or just IR radiation?

In this case it is also the interaction with the electrons that adds quanta to the vibration. On the other hand temperature doesn't exactly fit the picture here. Temperature is a statistical average quantity, it's (proportional to) the average the kinetic energy of the particles in any body (that's where the expression $E=k_BT$ comes from). But a higher temperature means more energy and it would imply a higher vibrational energy levels as well.

Not the answer you're looking for? Browse other questions tagged thermal-radiation spectroscopy or ask your own question.

60
What are the various physical mechanisms for energy transfer to the photon during blackbody emission?
2
Difference between emission spectrum and black body spectrum
-1
Black body radiation and line spectra

4
Do XAFS excitations and subsequent relaxations lead to vibrationally hot molecules?
14
How can the black body radiation formula be so general?
1
Confusion with Blackbody Radiation
2
Blackbody or characteristic emission of radiation
1
About blackbody radiation
1
Vibrational and rotational spectroscopy
3
Why is the blackbody emission spectrum independent of what frequencies are absorbed?
1
Molecular vibrational modes seem to involve most atoms of the molecule, so why IR spectroscopy assign absorptions to particular localized bonds?