How can two seas not mix?

How can two seas not mix? I think this is commonly known and the explanation everyone gives is "because they have different densities". 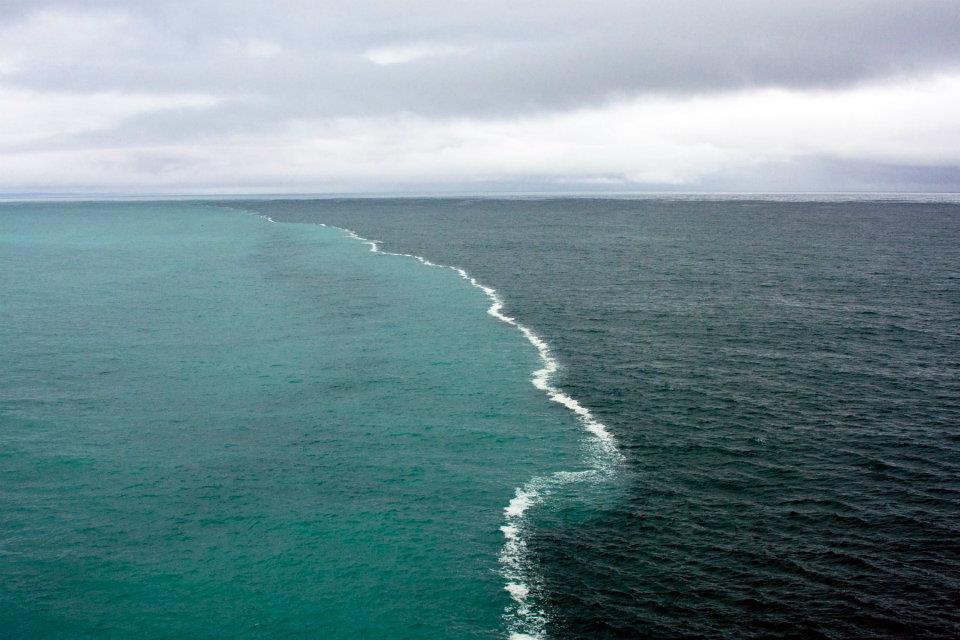 What I get is that they eventually will mix, but this process takes a long time.

From what you see in this picture you can see that they have a clear separation line as if you would mix water and oil.

Basically what I'm skeptical about is the clear separation line between them. Putting highly salted water and normal water in the same bowl will cause almost instant mixing. Can you get the same effect as shown in the picture in a bowl at home ?

I'm looking for a more complete answer than just that they have different densities. Thanks.

There are two mechanisms for mixing at a liquid-liquid interface, firstly diffusion and secondly physical agitation.

Diffusion is negligably slow in liquids, it takes days for solutes to travel a few centimetres, so the mixing is dominated by physical agitation e.g. wave action, convention currents, wind mixing etc.

In this particular case it's hard to judge what effect waves and wind have. The sea looks very calm, so I'd guess that waves and wind have little effect and it's not that surprising that mixing is slow. I bet that line wouldn't be as well defined the morning after a storm.

This sort of divison isn't that unusual. I grew up in Khartoum where the White Nile and the Blue Nile meet, and the division between them remains sharp for miles. Although I don't have any snaps from that era (I was five :-) the following picture found with google images shows the division nicely. 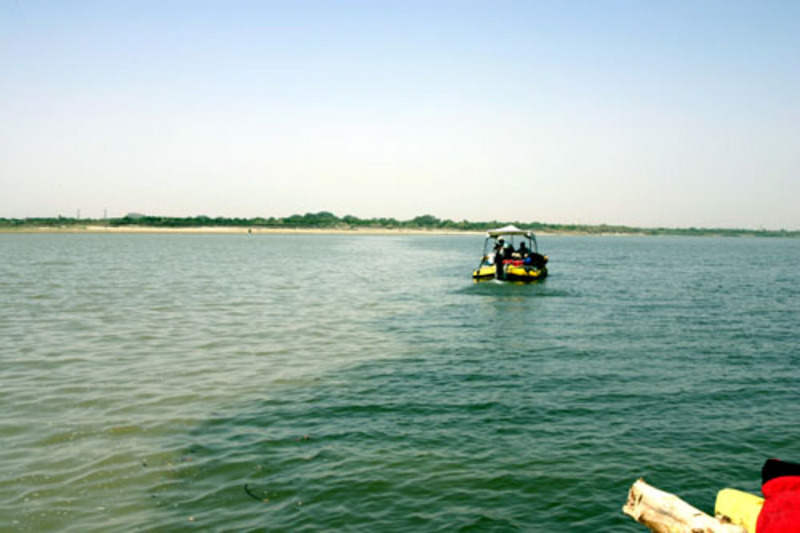 This can also be seen from space, as in this NASA Earth Observatory Image of the Day: 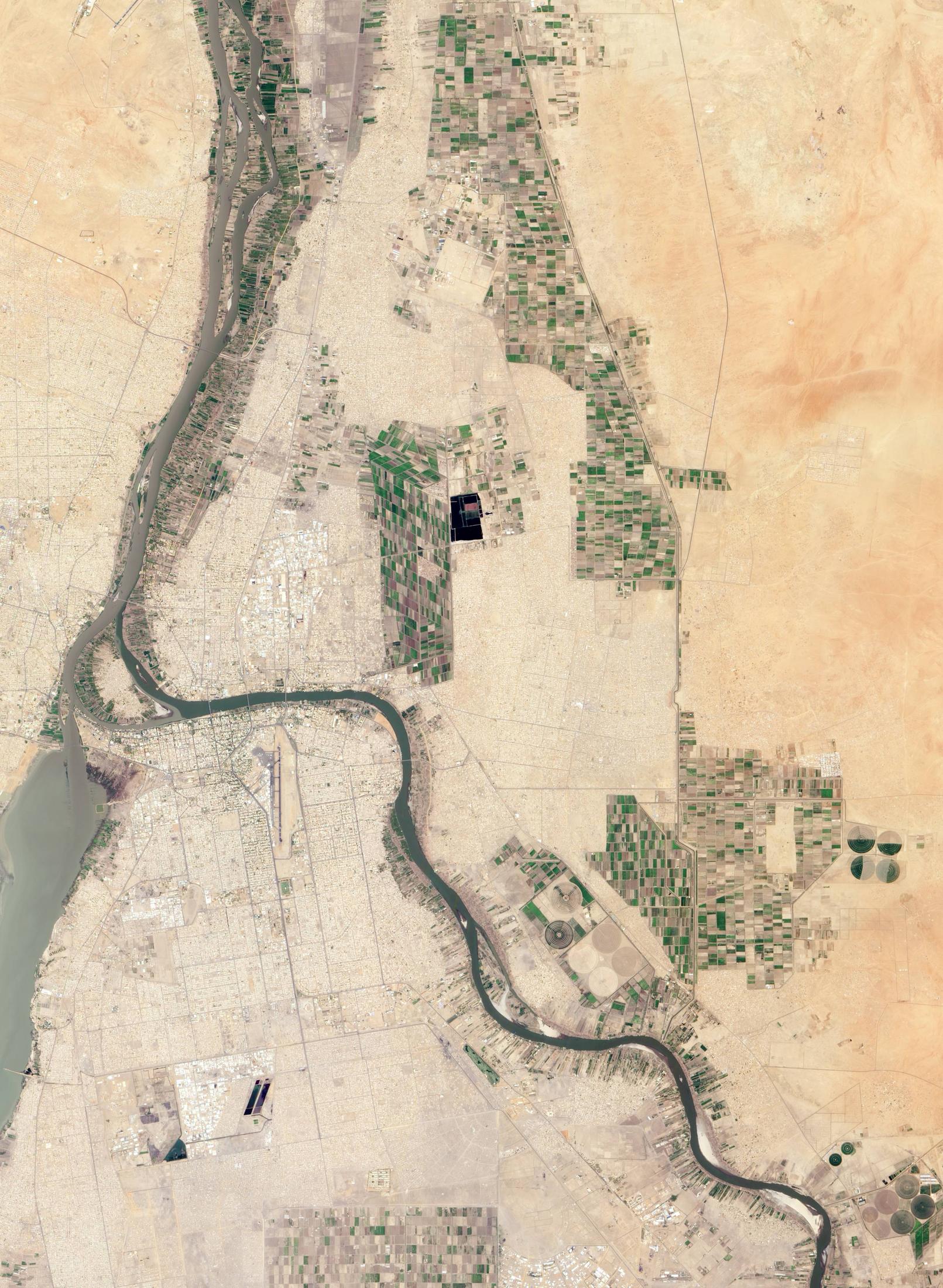 I asked the oceanologist (Nikolai Koldunov) about this photo. Here is his answer:

In the ocean even if the difference of density is small (e.g., of the order $0.1\,kg/m^3$) the process of mixing between two water masses is rather slow (without strong turbulence). The picture probably was taken close to the estuary of a big river. In this case density difference between fresh river water and salty sea water should be of the order of $20\,kg/m^3$, that is why the boundary is visible so clear (taking in to account calm wind conditions).

I (Grisha) checked the location on Google maps http://goo.gl/xY41z and yes — there are three huge rivers not far from the Flickr geotag — Dangerous River, Ahrnkin River and Italio River. UPDATE. Actually you can clearly see this sharp front on Bing Maps! — http://binged.it/VoGDhh

The front is most likely not strictly vertical — the fresh and warm water runs on top of the cold and salt ocean water, that, in turn, is submerging under the fresh water. Here is the fragment of lecture with the explanation how the vertical front can be formed, e.g. this picture 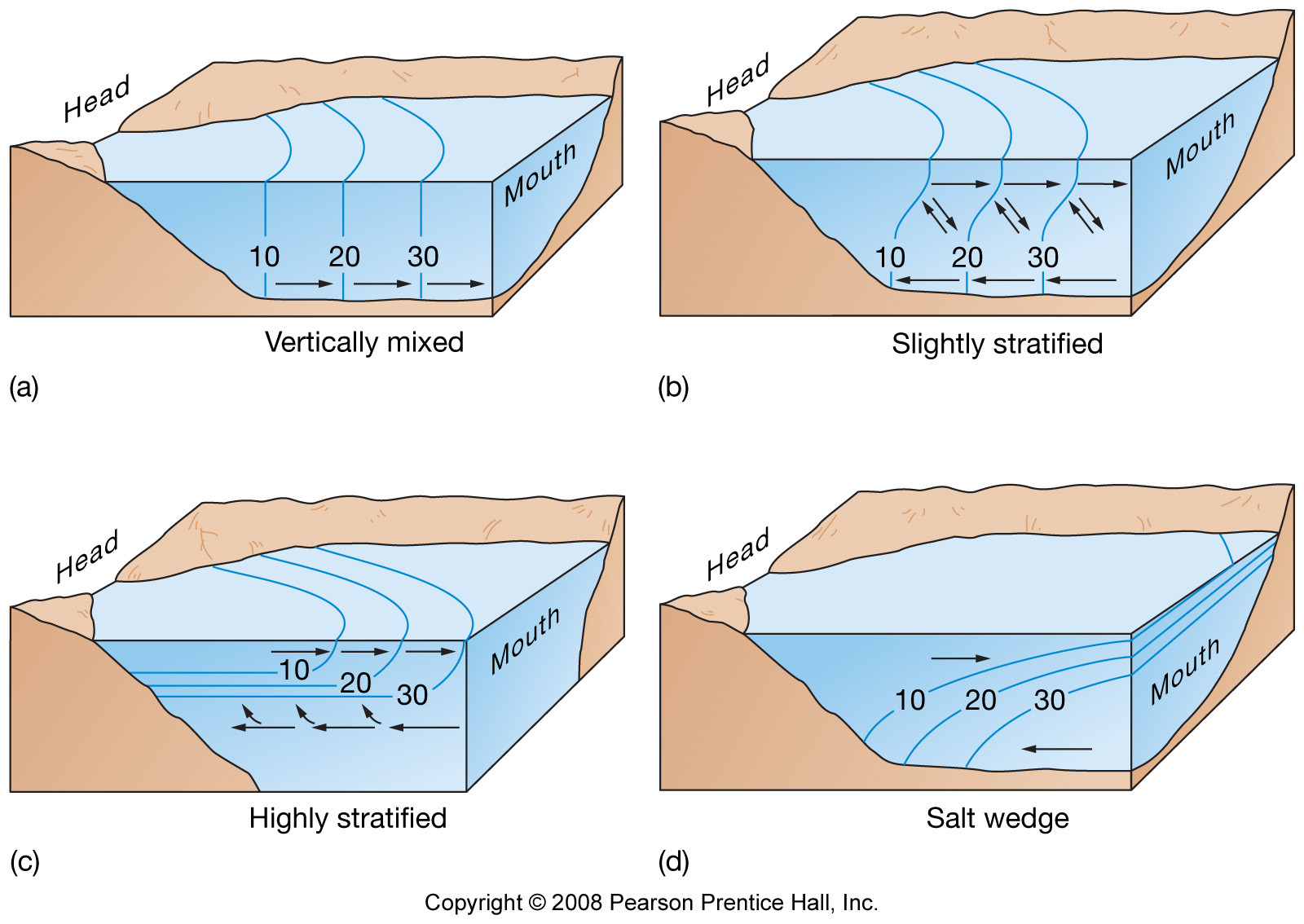 Your picture is an example of so called salt wedge estuaries. The classical example of such wedge is the Columbia River. 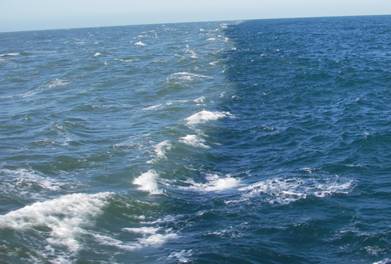 In Internet, you can find a lot of such pictures from satellites, here are two examples:

Nobody has thus far touched on the probability that freshwater at a river/ocean interface is quite likely to be muddy. What does this mean? It means that the water is likely to contain a stable suspension of silicate micro- or nanoparticles, which are unable to aggregate due to short range electrostatic repulsion. This is what is called a colloid.

The example of the turbidity of fresh versus ocean water was one that came up in a phys chem course I did a few years ago. The clarification of water at a river delta is something that can be seen in satellite imagery worldwide and has less to do with the dilution of muddy water in an ocean and more to do with the destabilising effect of dissolved ions on muddy colloids, which results in a radical reduction of aggregation timescale.

What this means is that in mixing muddy fresh and clear salt water the colloidal mud particles will rapidly aggregate and literally drop out of the water. I would posit that what is being depicted here is actually a phase transition of sorts between 'stable colloid' on the left and 'unstable colloid' on the right, with an attendant sharp distinction in light scattering off suspended particles. The salinity gradient thus may be somewhat smoother than the boundary would suggest as a fairly small change in salinity may be the difference between muddy water that is indefinitely stable, versus muddy water that will clarify in seconds.

I initially suspected that the picture here is one of a sand bar next to deeper water, not of two "seas" not mixing, where the light-colored water is light because it is shallow, and we are seeing the sand below, and the dense region is dark because it is too deep to see the bottom, and the light is absorbed rather than reflecting back.The foam we see at the border is from waves that are pushed up when the deep-water waves encounter suddenly shallower water. I think, having read another response (see comment below; I can't remember the name of the author ATM and the edit section doesn't allow me to see it) that he's right: it's one liquid (say, a large river of fresh water) flowing into another (probably the ocean or something connected to it).

You're right that different-density liquids will eventually mix if they are mutually soluble, but generally, when you have a case of two mutually soluble liquids with different densities, they're top & bottom, rather than side-by-side.

You can get this effect at home with water, sugar, and food coloring. First, mix 2 parts sugar with one part water. Heat until all of the sugar is dissolved, and add some blue food coloring. Put it in a clear container. Allow it to cool to room temperature.

Next, mix some red food coloring with water. Pour it over the back of a spoon slowly and gently so as to minimize mixing.

The glass should show blue on the bottom, red on top, with minimal purple in the middle if you can do it right. It should persist for at least a few hours, possibly a few days. This is similar to what happens in the global conveyor belt, where cold, dense, saltier water is beneath warm, relatively less saline water. It can also happen on a smaller scale, with brinicles, as explained by Alec Baldwin. 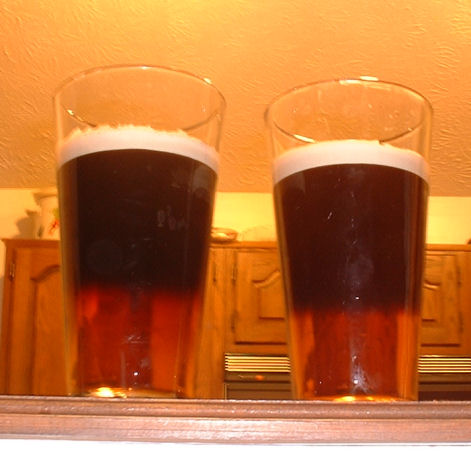 Its worth pointing out the separation of two similar liquids is a common experiment. The diffusion of the liquids into each other is governed by Fick's Law but can also be understood in terms of Entropy of Mixing.

The key to this puzzle is to really understand it in terms of entropy. Although the Black and Tan shown in the picture will eventually mix over time, if we found some mechanism by which we could build a dynamic cycle similar to a complete thermodynamic cycle we could keep the material separated as long as our energy source held.

One has to keep in mind that it is both the temperature gradient and the material density (as well as properties of dissolved solids) that governs the mixing between the materials. If materials of different densities have substantially different temperatures, they will tend to stay separated longer then if they were at the same temperature.

In the case of two seas, because there is a constant source of energy (the sun, etc), as well as an apparent source of material to cause different densities, those dynamic sources must also be accounted for in our understanding of equilibrium. It is the dynamics of the total system being analyzed that will cause it to favor sets of configurations that might not be stable in a more "static" diffusion problem.

The problem of ocean mixing is probably best generalized in the study of ocean circulation models.

Mechanism of Mixing: First of all (as we all know), Mixing is not an atomic or nuclear phenomenon. It happens when the molecules of one fluid takes its place in some interstitial position between molecules of other fluid. The reason that I've mentioned "fluid" is because, the atoms (or molecules or whatever), are free to move in fluids. In case of solids, this doesn't happen. Because, the molecules hold themselves so tightly that they won't allow any other molecules (even their own) to come and occupy the position unless affected by pressure, temperature, etc.

What happens actually? Practically, its impossible for two liquids of different densities to make a natural boundary between themselves. As John told, some external force may help the molecules of one liquid to diffuse through the other very easily. Gases (no problem), they don't require a force at all because they scatter everywhere. The difference is because, the intermolecular forces existing among the liquid molecules is somewhat higher than those in gases. This makes the diffusion process to happen very slowly in liquids than in gases. (actually, phrased by @tpg and I agree with it)

When you mix two liquids in bowl, either the molecules obtain the necessary force to diffuse, from your shaking of bowl or if you stir it. One thing must be noted that this phenomenon necessarily depends on the surface area. In a bowl, the area occupied by the liquids is so less. And due to this reason, the force could easily push the molecules simultaneously.

In case of seas (or oceans), the force can't push and push and push the molecules forever... They have to vanish at sometime. Moreover, such a tremendous force couldn't be expected in oceans. That's why John mentioned "calm". Sadly, there's no one to stir the seas. If we take sci-fi into our topic and assume a 20 richter (impossible) Earthquake under the ocean to do our job, there would be enough force to get you muddy water.

The mixed state is a thermodynamic equilibrium state and unmixed a non-equilibrium state. A non-equilibrium state can only be maintained if there is energy flux into and out of the system. In this case the obvious reason could be influx of fresh water or water with different salinity (energy in matter) is countering the mixing such that non-equilibrium is maintained, even though there is mixing by both diffusion and convection (storms etc). However other systems relying on other forms of energy to cause unmixed states, i.e., wind patterns and ocean currents rely on solar energy flux and geothermal energy flux respectively. The exact reason would depend on the actual situation. Of course this may not be the detailed answer you are looking for but I am just putting the overarching concept out there.

Not the answer you're looking for? Browse other questions tagged fluid-dynamics diffusion or ask your own question.

0
Is the temperature different and or salinity different can lead to different colour of the water bodies?

1
Head losses on parallel pipes
1
Orientation of large water drops break-up
12
Patterns in laminar flow of tap water
11
The optics of vortex (in water): why there is a bright ring?
0
How much input fluid is needed to fully replace the contents of my inline chamber
1
Mass conservation for water and oil flow
1
Laminar Flow From Outdoor Faucet