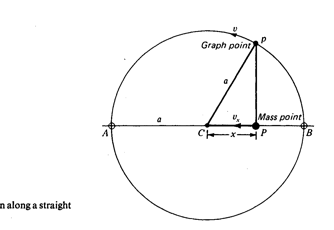 By book defines SHM as

Simple harmonic motion is defined as the projection on any diameter of a graph point moving in a circle with uniform speed.

but in the next line it says -

Moving back and forth along the line AB, the mass point is continually changing speed vx' Starting from rest at the end points A or B, the speed increases until it reaches C.

Can somebody explain - If the original particle is moving with a constant speed then how come it's mass point have different velocity ? Also for a simple harmonic motion resorting force should be proportional to displacement (towards mean position) .In this diagram i see no force acting on mass point?

This isn't the definition of SHM I would go with, but it is equivalent so we'll run with it for now.

An equivalent (and I think simpler) way to define harmonic motion is simply any motion that is sinusoidal in time, that is, any motion $x(t)$ in the form:

where $A$ is the amplitude (radius of the circle in your diagram) of oscillation, $\omega$ is its 'angular frequency' (named since its the angular frequency of the reference particle) and $\phi$ is just some offset since we don't know where in the cycle the particle started.

SHM is governed by the following equation:- $$\ddot x+\omega^2 x=0$$ Here $\omega$ is a positive constant which is also known as angular frequency of simple harmonic motion and $x$ is the displacement from the mean position.

The diagram given in the post gives an analogue of simple harmonic motion which simplifies the problems we deal with but the above definition clearly convinces us that the net force is always directed towards the equilibrium position and is proportional to its distance from the mean position.