Maximum possible fuel efficiency at a given altitude

What's the maximum physically or technically possible fuel efficiency (considering common fuels like gasoline or diesel) that can be reached for a 1 ton vehicle at sea level?

Can this be calculated? Is there a point where it's not possible anymore to get a better mileage?

The fuel can undergo combustion (with an oxidizer). If you do complete burning, you'll convert all the chemical energy in the fuel into expansion/heat. This doesn't really depend on altitude. But as you go up, you have less oxygen around you. That just means you either have to burn fuel more slowly or use a compressor to bring in more oxygen. As long as the fuel/oxidizer ratio is maintained, there's no reason that efficiencies have to drop with altitude.

Real engines are a balance between efficiency and power. If you burn the fuel slowly and allow the reactants to stay at temperature for a long time with plenty of oxygen, you get nearly complete burning. But that doesn't make for high power. For a car engine, you need to burn the fuel quickly. That reduces the burning efficiency slightly as some unburned and incompletely burned fuel leaves the engine.

After the fuel has burned and released its chemical energy, you need to turn it into useful work. Efficiencies there are discussed in another question

Of course you can calculate that. Heat of combustion per fuel 1 $\textrm{kg}$ must be equals to work done by resistance forces :

Coefficient of rolling resistance is a function of car speed : 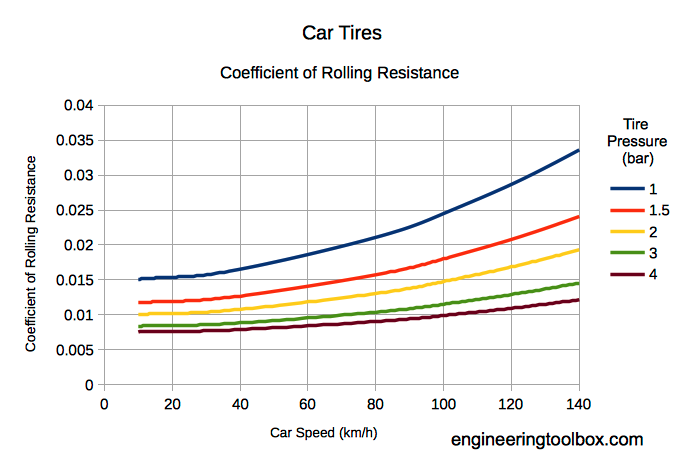 BMW 7 Series (E65) can drive $12.2km$ with 1 liter of diesel. That's about $2.4$ times less than predicted theoretical limit. That may be partly, because it's very hard to construct highly effective engines. Also not all fuel combustion useful energy is converted to car kinetic energy. Some of it may be transferred to accumulator which in turn powers all car electronic devices, such as - GPS navigation, on-board computer, parking system, autopilot control, electronic stability program, etc. In nowadays car is not just "box pushed forward by engine", it's far more complicated system. And I predict that for the future power consumption will raise even more, because systems tends to become more-complex. We already can see this trend from the raising power consumption of cell phone battery. In nowadays typical cell phone keeps battery energy for 1-2 days, while in good-old times battery energy was enough for 1 week+.

Not the answer you're looking for? Browse other questions tagged efficient-energy-use or ask your own question.