Is all matter made of virtual particles?

This article in New Scientist says that all matter is actually virtual particles popping in and out of existence and nothing more. is this correct?

Note the third word in QFT, theory. Theory means that it is a mathematical model for calculations which will, if the theory is valid, describe concrete measurements and behaviors of physical reality. The basic building block of QFT is the Feynman diagram: a mathematical prescription that will give integrals which will describe the crossection and angular distributions and phases in experiments with elementary "particles". By "paticles" we refer to the standard model particles assumed to be elementary. 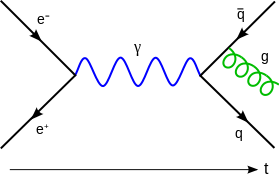 The following decay of a Kaon

shows input real and output real particles, i.e. particles we can measure with our instruments and get their lifetimes, their crossections etc and check against the theory as exemplified by the Feynman diagrams.

We observe that input is a pair of quarks and output are three pairs of quarks. It is the pairs that are real. The quarks, the gluon, the W exchanged are virtual, i.e. off mass shell particles: with the quantum numbers from the table of SM particles but an off shell mass.

Now one can say that the K meson is composed of virtual particles if one makes a one to one identification of the guess, a good guess, of how the Kaon is built up, but the Kaon itself is real, as are the pions which are the end products. Real because we measure them with our instruments. Virtual particles are a very useful mathematical tool that simplifies our view of particle interactions, that is all.

Edit: I will incorporate the content of my reply to the comments here.

Electrons and all leptons are real particles when on the mass shell, i.e. on external Feynman lines. The same is true for photons and Z and W bosons when on mass shell. Quarks and gluons can never be free and measured individually, because of the nature of the strong force. So quarks are always virtual and have to appear in pairs(mesons) or triplets (protons) in the external legs of the diagrams, and it is the pairs and triplets that can be on the mass shell. Gluons cannot be on their mass shell either, and their only externally measured evidence is in hadronic jets.

All microscopic quantum mechanically defined items can be sometimes virtual and some times real ( except quarks and gluons which are always virtual). Virtual is in the contained level and real is the total group that is under measurement and observation.

There is always a real level riding on virtual particles, nuclei, atoms, molecules depending on the magnification one looks at in the microcosm. Our reality rests on nested levels of virtuality and reality ascertains itself on the level we are examining.

In the classical world we live and move in the underlying levels of virtuality are immaterial, because in addition to the nesting process described above there is also something called "decoherence"

decoherence is the mechanism by which the classical limit emerges out of a quantum starting point and it determines the location of the quantum-classical boundary. Decoherence occurs when a system interacts with its environment in a thermodynamically irreversible way. This prevents different elements in the quantum superposition of the system+environment's wavefunction from interfering with each other.

It statistically transforms all quantum mechanical substructures to the level we measure and describe with classical physics and certainly call real.

a better way to say it would be to say that all matter is created from ENERGY. the term virtual particle seems to mean something different to everyone. i have seen folks refer to virtual particles as quantum foam, and i have seen others call virtual particles simply a way to describe field fluctuations. also beware that many so called "science mags" are clickbait and not real science backed by real experiments.

New Scientist is a frightfully un science like mag.

the pretend to be science when they are clueless.

"New Scientist says that all matter is actually virtual particles popping in and out of existence and nothing more. is this correct?"

the quick answer is NO.

i will try to give a better answer than that however.

New Scientist should not have used the word "virtual particle" to describe objects with mass, like a proton.

while one can say all matter comes from energy, it is wrong to suggest that the mass you have in your hand will all the sudden pop out of existence.

The proton decay hypothesis was first formulated by Andrei Sakharov in 1967. Despite significant experimental effort, proton decay has never been observed. If it does decay via a positron, the proton's half-life is constrained to be at least 1.67×1034 years.

so the matter that you see and believe to be "real" is not going anywhere.

the term VIRTUAL PARTICLE is best suited for describing force carriers, like how virtual photons mediate the electromagnetic force.

Although the New Scientist requires readers to subscribe in order to read the entire article, this is very much the answer I was looking for. An agreement of 2% of the proton mass with QCD-based calculations is indeed impressive, and a big improvement over previous attempts (and from which I was actually sourcing some of my much less popular responses).

The energy that causes the gluons and quarks to get pumping, dancing, color changing, and whatever else they do, is driven by the relentless popping in and out of existence of other quark-antiquark pairs, as well as other virtual particles. I'd like to know the details of the analysis they did, but it will need to be published somewhere I don't need to subscribe in order to read.

Although it could not be said when this article was published, the other 2% is no doubt the contribution of the Higgs mechanism with the quarks. Murray himself should be pleased, as much as figuring out such things seem to have tortured him.

This is a beautiful theory, and it makes a lot more sense than the previous nonsense I read about having "perfect vacuum" in confines of the constantly changing flux tubes. Now I can finally understand why everyone else at the physics stack exchange is so jazzed about QCD in general. It makes perfect sense to me now. Thanks for sharing.

Not the answer you're looking for? Browse other questions tagged particle-physics virtual-particles or ask your own question.

8
Why aren't all photons virtual particles even in the “vacuum” of empty space?
3
Quantum field theory quote