Where does the photon orbital angular momentum go in light-matter interactions?

Following this Phys.SE question, Selection rules for atomic emission: why doesn't the photon carry orbital angular momentum, it is clear that since atoms are so small (<0.1 nm), they don't really "feel" the OAM of light. This is because the wavefront of optical light carrying OAM changes on the scale of many hundreds of nanometers for optical light, much larger than the atom. Thus, the atom shouldn't really be able to tell the difference between an optical photon carrying non-zero OAM and one with zero OAM.

The logic of the above question is quite sensible in my opinion, but the issue I am having is: where does the OAM go when an atom happens to absorb a photon with non-zero OAM?

I would assume that OAM is conserved in the absorption of the photon and goes into center-of-mass atomic OAM, but is that necessarily true? And how do we reconcile the atom's photon-acquired OAM with the fact that the field is locally identical to an ordinary photon with zero OAM on the length-scale of atoms?

Edit: I want to emphasize that I am only considering optical (visible) light, which is much larger in wavelength than the atom. Additionally, I am thinking of the general case of an atom not located precisely in the central vortex of the OAM beam, but on one of its side lobes.

This is going to be a bit of a half baked answer but here it is.

The usual picture for light with orbital angular momentum is light in a Laguerre-Gaussian Mode mode with non-zero azimuthal index. This sort of field has phase wrapping azimuthally around the propagation axis.

As I point out in the linked post and as you emphasize in the question, typically when we think about interactions between atoms and light we work in the dipole approximation meaning we assume the electric field is homogeneous across the whole volume of the atom. In the case of light with angular momentum we can see this is not the case. Consider the simplest Laguerre-Gaussian mode with a non-zero phase wrapping. 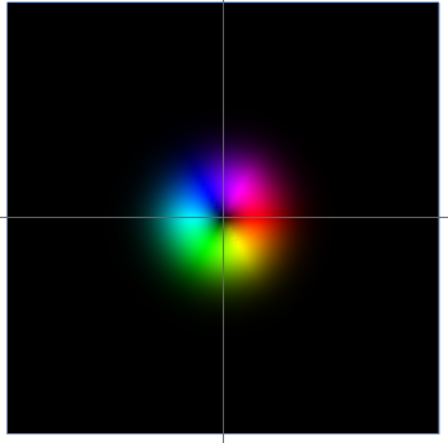 When the dipole approximation fails all of the "usual" selection rules that you learn in intro classes are thrown out the window and you need to use higher order selection rules.

I don't know enough about all the details of these selections rules but you can see that this pattern could impart angular momentum to the electron around the nucleus.

Note that you state

And you drew this conclusion from my answer to the other question. This conclusion is incorrect. It is possible to have optical fields which vary on atomic length scales (Like the one I have shown above). It just requires using tightly focused or very high order optical fields which need to be carefully aligned so that their regions of large gradients are overlapped with the atom. For example, if the Laguerre-Gaussian mode depicted above is made to be a large beam (waist of a few mm for example) and is offset so that the atom is like in the middle of the red part then the field will look homogeneous to the atom. It is only when the atom is at the central vortex that it strongly experiences the field inhomogeneity.

*We can always choose a basis for the optical field which is centered on the atom. If beam is displaced from the atom then in this particular basis it will be composed of a large number of high order modes.

After reviewing the comments I believe KF Gauss is correct in their statement that the atom picks ups angular momentum with respect to the light propagation axis. See Eq. 5.448 in Quantum and Atom Optics by Steck regarding the mechanical force on an atom by an optical field.

Note that the formula for the force above is derived from the optical Bloch equations including spontaneous emission. Thus the force arises as a result of the atom absorbing light and spontaneously emitting it in a random direction. I bring this up because it's not entirely obvious to me what would happen if we considered absorption alone.

The key to understanding how orbital angular momentum (OAM) can be conserved when a photon that carries OAM is absorbed by a small particle is to understand OAM itself a little better. Note that OAM in a paraxial light beam is always defined with respect to the propagation axis of that beam. If one would pick some random axis pointing in some random direction and displaced away from the beam by some random distance, then the OAM would be different. This is because the linear momentum of the beam now contributes significantly to that amount.

But what if the particle sits off-axis in the beam? The probability for absorption (via the dipole moment) becomes much larger, because the light intensity is much larger. This time, there is no vortex that can apply a torque to the particle. So what happens to the OAM? This is where the picture of the linear momentum that I explained before becomes important. The particle would pick up a linear momentum from the photon. In this region, the wave front of the optical field is tilted. So the local propagation vector that optical field has in this region would give the particle a linear momentum that has a slight transverse component. It would be projected along a straight path that is twisted with respect to the propagation axis of the optical beam. When one computes the OAM due to this linear momentum with respect to the original propagation axis of the optical beam, one finds that it gives exactly the amount of OAM that was carried by the photon that was absorbed.

It is simple : the photon can raise an electron to a higher energy level only if all the quantum numbers are conserved,including angular momentum. It is not enough to have the energy difference ( within the width of the energy level).

Not the answer you're looking for? Browse other questions tagged electromagnetic-radiation angular-momentum quantum-optics or ask your own question.

0
Can we transfer part of the angular momentum of light to mechanical objects?
2
Selection rules for atomic emission: why doesn't the photon carry orbital angular momentum
1
Mathematical formalism to show that an atom casts a small shadow in the photon field that illuminate it
1
Will an atom emit a polarized photon the same as the polarization of the incident photon?