Why does water fall sort of helically from a cup? [duplicate]

I noticed today that if I took a glass of water and poured it out slowly (small tilt to the cup), it flowed rather smoothly, but when I increased the tilt the water flowed in a sort of helical manner, this could be observed in the given image in the case of a tap: 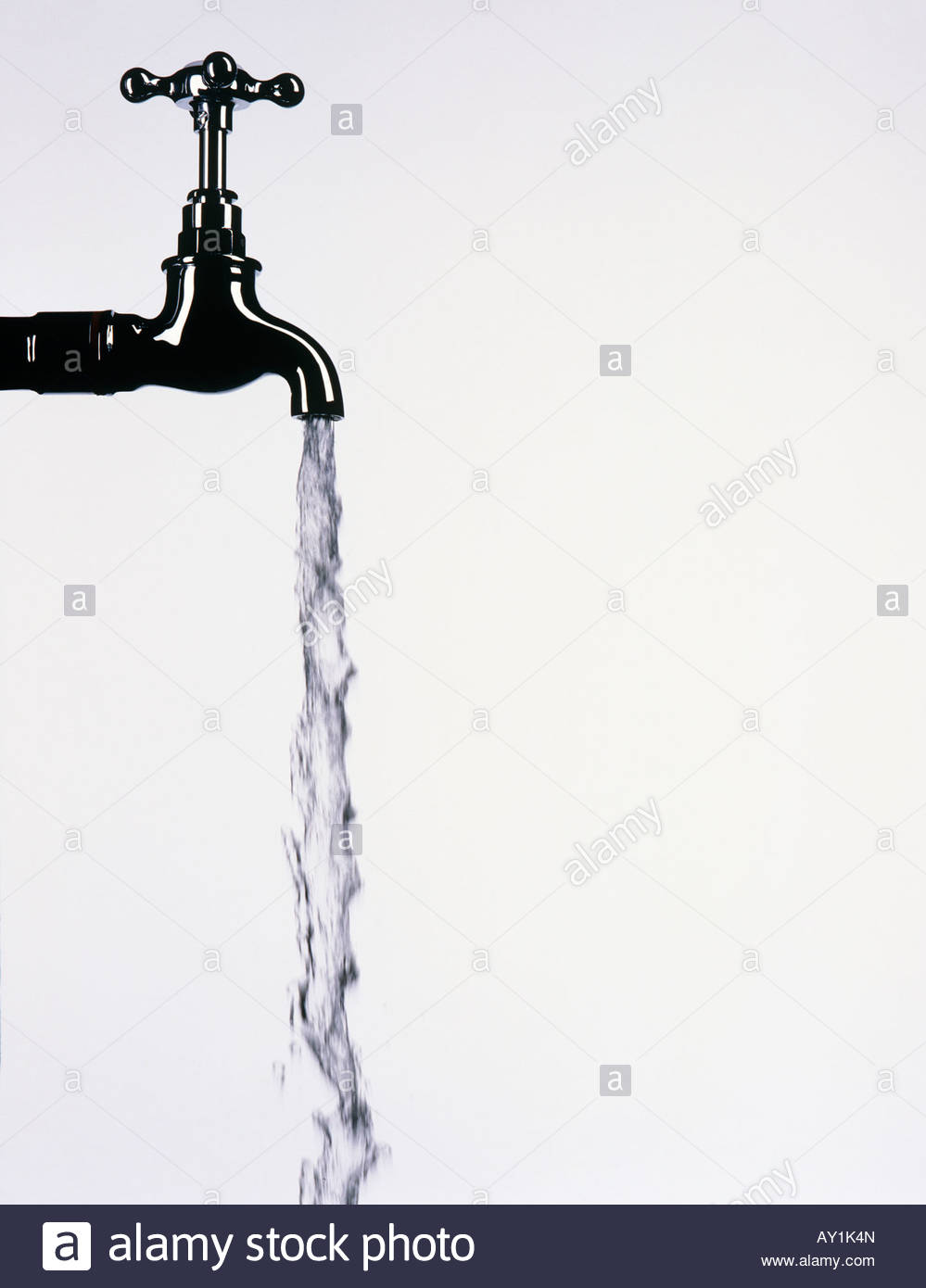 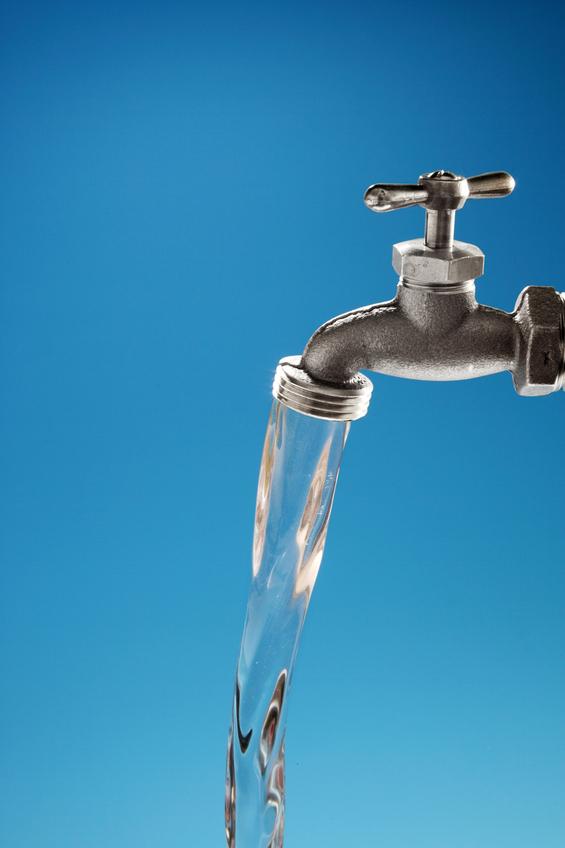 What could the possible reason for such a flow be?

Considering Plateau-Rayleigh instability (mentioned in comment), could it be that if speed of water flow be quick enough that the flow doesn't break down to form drops. This is what my limited non mathematical understanding brought me to.

I have misinterpreted the question. This post does not answer the original question of why helical patterns appear in flowing water, which has been already answered here.

Interestingly, my observation of chain-like patterns in flowing water corresponds to the one described in this question.

Unfortunately the above-mentioned question was wrongly marked as a duplicate which prevents me from answering it. I've presented the case before the moderators. (See meta post). Thanks for your attention.

You have made a very interesting observation. In short, this is due to the shape oscillations of the flowing stream of water.

I did the experiment and observed the pattern too. But I'd say that the pattern was not really helical, it was more like the shape of a metal chain. Here you can see the same image from two different angles. 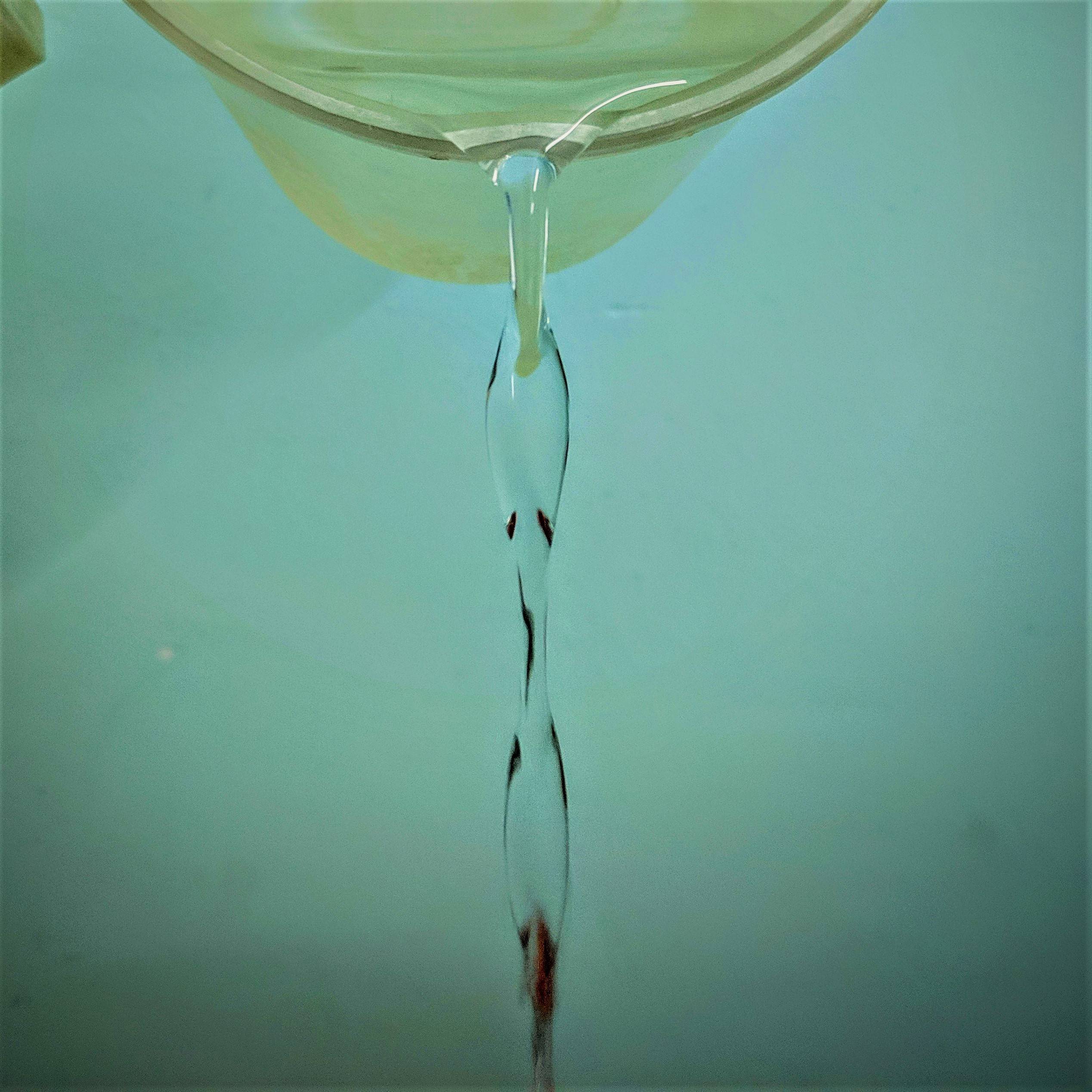 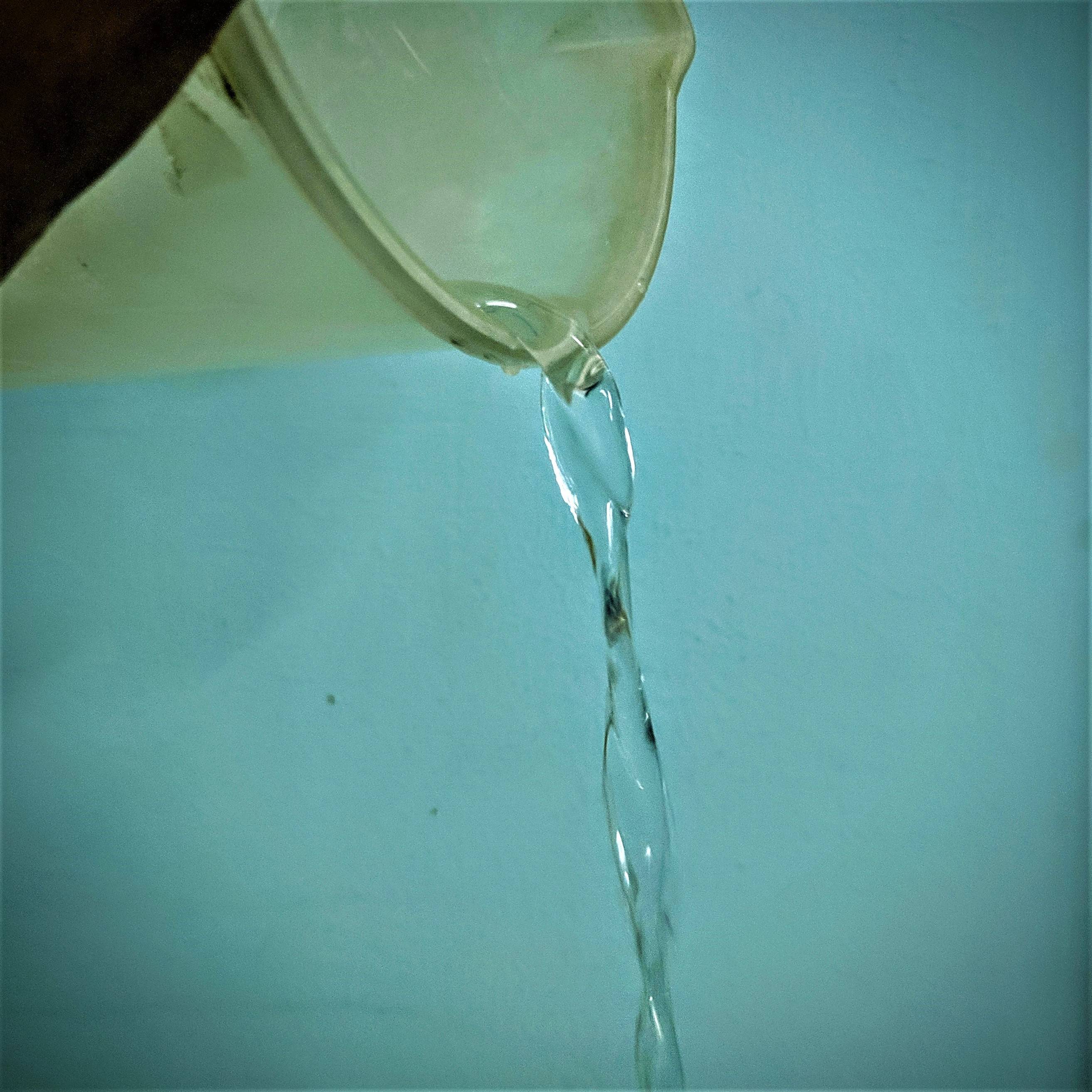 When you look carefully at the two images, you would see the flowing water is flattening out in mutually perpendicular directions as it falls down the cup. This works due to a principle similar to the one behind shape oscillations of a freely suspended water droplet. Only difference is that here, you don't have an oscillation in the direction of the flow. So this is actually a 2D case of water drop shape oscillation. 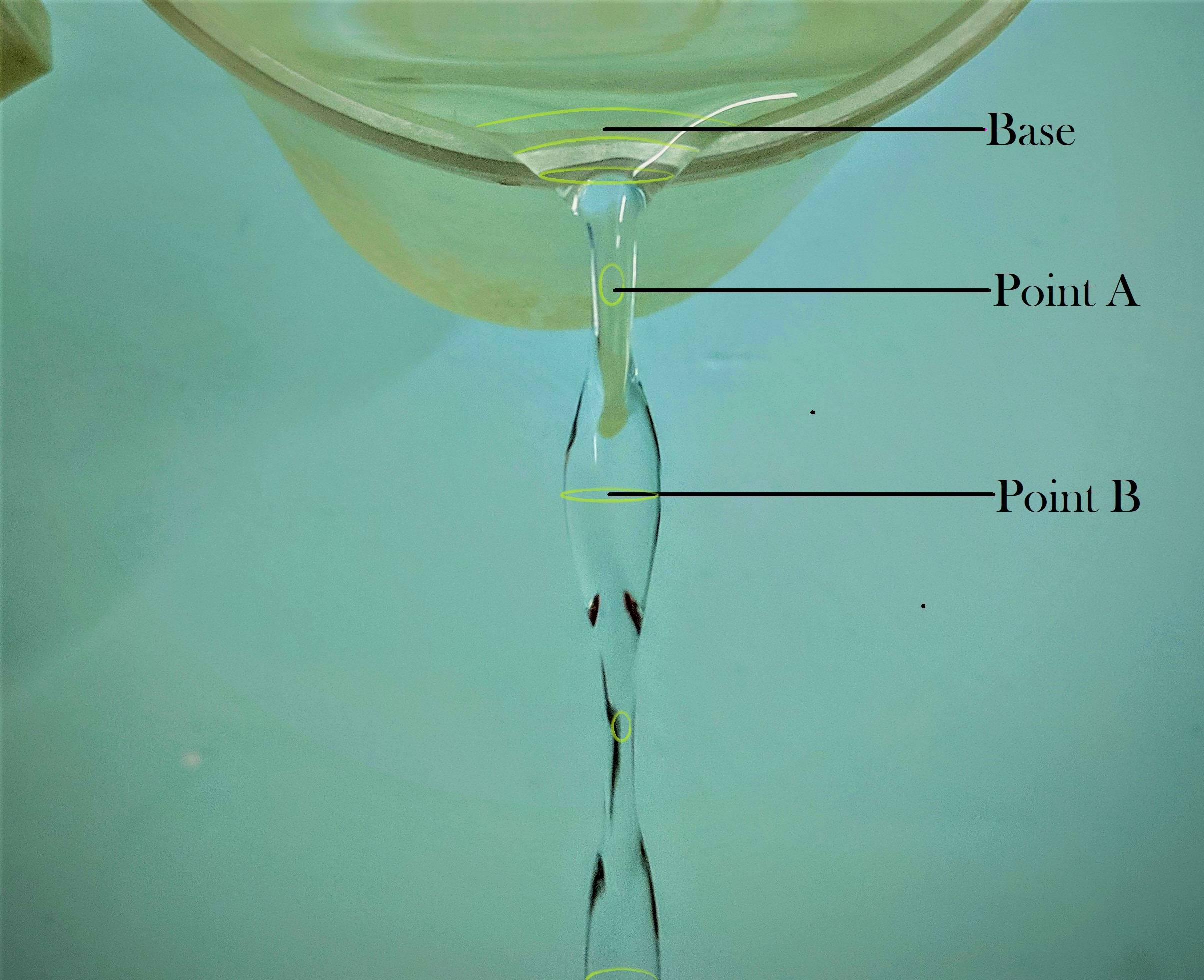 Consider water flowing out from the cup at a uniform rate. We can imagine that the flowing stream of water consists of several cross-sectional films falling down one after another (marked in the picture as green rings). For simplicity, we neglect any interactions between the adjacent films. Let's track the shape of one of the films. When no other force is at play, the film tends to remain in a circular shape.

At the point where water loses contact with the cup (which I shall call 'Base'), the film is stretched out horizontally due to the normal reaction of the cup. When the film leaves the base, surface tension would provide a restoring force for the film. The film would get fully stretched in the perpendicular direction at position A. 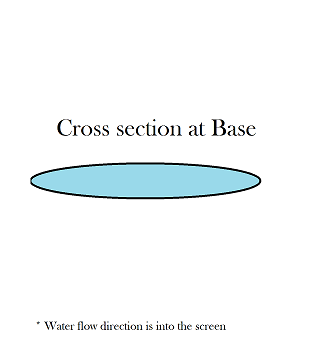 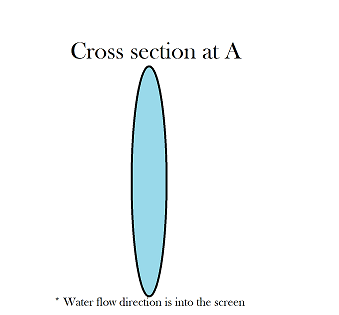 This sets up a 2-D oscillation. The film would oscillate between these two states as it falls down.

The oscillations may not be exactly as above but is somewhat similar.

Now imagine all of the films falling one after other down the cup. Note that all the films start out with a horizontal stretch. This would mean that each cross-sectional film would be in the same state of oscillation after falling the same distance from the cup. In other words, initial phase of all the films would be identical.

So in the big picture, as you go down the flow, you are actually observing the different states of the above oscillations with respect to time.

When you plot the different time states of the above depicted 2-D oscillation in along a Z-axis, you get a pattern similar to the one we observe in reality (but less curvy).

Here we have not included any damping forces between adjacent cross-sectional films. If we had, we would have obtained a much smoother shape.

12
Wavy stream of liquid
16
Are we really moving at the speed of light in the time dimension?
15
Why does pouring tea to a plate make directional jets?
15
Why pouring milk from a height makes a chain shape?
1
Why does the shape of water flowing down from a squared orifice looks like a chain?

1
Why does water fall in a twisted spiral shape, when poured from a bottle?
22
How come I never see cosmic rays in steam like they appear in a cloud chamber?
1
What keeps small mobile bubbles at the bottom of a kettle from rising
2
Laminar Flow From Outdoor Faucet
1
Squeezing water out from wet cloth
2
Can tea leaves in a cup go to a kettle when water is pouring from that kettle?
1
Why does water follow the spoon's surface?
0
Why does hot water shoot out of my reusable coffee cup when I invert it during cleaning?