Why the Earth's inner layers temperatures are layered and not distributed?

so I was having a debate with a flat earther, and he sent me this image which I couldn't explain well. 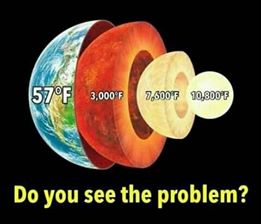 at first, I thought that the different pressure levels inside the layers cause these levels of temperatures, but I'm not sure because if that, atoms still can collide with each other and transfer heat between them.

so why the temperature is not evenly distributed inside earth shouldn't the hot elements interact with the colder ones and transfer heat between them?

Do you see the problem?

There is no problem.

We know from deep mines, deep oil wells, and deep boreholes that temperature inside the Earth initially increases very rapidly with increased depth, about 11°C/km (or 30°F/mile). The temperature at the Earth's core would be over 100000 °F rather than 10000 °F at this rate of increase. This initial high thermal gradient does not apply throughout the Earth. Below is one depiction of estimated temperatures inside the Earth. 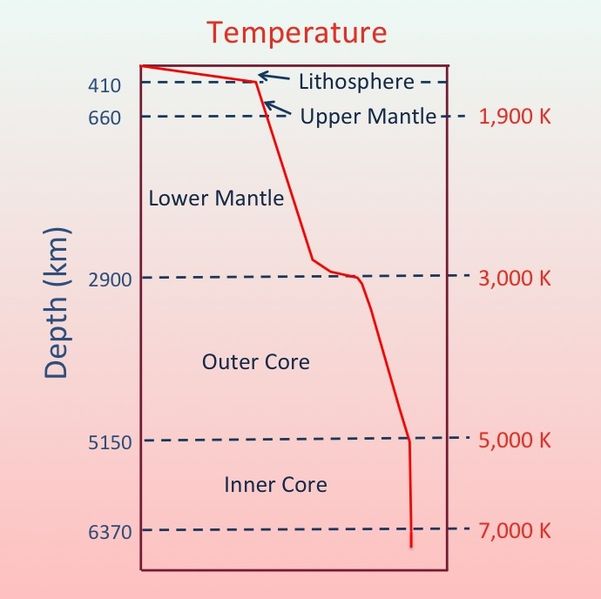 Note that the temperature is 1650 °C (3000 °F) at about 485 km depth, or about 7.6% of the way to the center of the Earth. The diagram in the question is more or less correct -- except for the "Do you see the problem?" label. There is no problem. Rock is a rather lousy conductor of heat. The thousands of kilometers of rock that separate the Earth's core from its surface make for a very nice blanket. Rock is such a lousy conductor of heat that the very slow convection due to the elasto-plastic circulation of the solid mantle dominates over conduction.

So why is the temperature not evenly distributed inside earth? Shouldn't the hot elements interact with the colder ones and transfer heat between them?

Temperature inside the Earth is not evenly distributed because the Earth has not yet cooled down to an equilibrium state. When you take a pie out of the oven, the interior stays warm for a good amount of time while the crust cools fairly quickly. The Earth is somewhat like that pie, and it gets worse.

Even when the Earth formed it did not have a uniform temperature. The core became very hot as heavy elements such as iron and nickel sank to the center, pushing lighter constituents (i.e., rock) away from the center. This gravitational differentiation generated a huge amount of heat, concentrated in the core.

The crust cooled fairly quickly, in a geological sense of "fairly quickly". Zircons have been found in Australia that date to 200 million years after the formation of the Earth. The formation of zircons requires somewhat cool temperatures, and certainly not hot temperatures in the thousands of kelvins. Meanwhile, the core and mantle remained hot (and remain somewhat hot to this day) because of that primordial heat from the Earth's formation and from decay of radioactive elements in the Earth's mantle and crust.

The Earth's interior currently loses 44 to 47 terajoules of energy every second to space. At this slow pace, the Earth will not cool down for a long, long time. It will take another billion years or so before the Earth's core finally becomes completely solid.

Not the answer you're looking for? Browse other questions tagged thermodynamics pressure earth geophysics or ask your own question.

1
How to vizualize a heat pump microscopically?
7
What happens if you connect a hot resistor to a cold resistor?
4
How hot would it get, if you put a greenhouse inside of a greenhouse inside of a greenhouse (like those Russian matryoshka dolls)?
1
Third law of thermodynamics conundrum with cyclic machines
1
Why is bringing two object to their initial temperature an irreversible process?
0
Why doesn't the sunlight supersede the effects of the bodies of water and the ground on the temperature of the atmosphere?
0
Technical definition of heat
1
Why should layers of air rise up and the layer above it takes it place