So my textbook says that the reaction forces between two surfaces in contact can be resolved into the normal reaction, which is normal to the surface and friction, which is parallel to the the surface. However, if friction is a reaction force, then I don't understand how frictionless surfaces can exist. On a previous question I asked about a car using friction to move, one of the answers claimed that static friction was a reaction force. Furthermore, this indicates that in frictionless surfaces, the parallel component doesn't exist. This means that the normal force will be equal to the vector sum of the reaction forces and I cannot understand how a vector sum will always yield a force normal to the surface, which means there's a problem here somewhere.

Recently, I needed to solve a problem in which I needed to list all the forces. Upon looking at the solution, I suspected a lot of forces were either mislabeled or left out. The answer to this question would help me confirm/refute my suspicions.

The title is too broad, my apologies. However, you see that my doubts were too many and too interlinked to be put into a single line and warrant a discussion as such.

Edit: While viewing the answer, also read through associated comments.

This statement is true only if there is friction between the surfaces and if there is a component of an externally applied force that acts parallel to the surface. Otherwise the only reaction force will be the force normal to the surface. You didn't put your book statement in context, but it sounds like it is referring to an object on an inclined plane with friction. That example does not apply to a horizontal surface where there is no external horizontal force applied to the object.

However, if friction is a reaction force, then I don't understand how frictionless surfaces can exist. On a previous question I asked about a car using friction to move, one of the answers claimed that static friction was a reaction force.

Furthermore, this indicates that in frictionless surfaces, the parallel component doesn't exist. This means that the normal force will be equal to the vector sum of the reaction forces and I cannot understand how a vector sum will always yield a force normal to the surface, which means there's a problem here somewhere.

I'm not quite sure of what you are saying when you refer to the "parallel component", but again it sounds like you may be thinking that a parallel friction force will always exist as a component of the reaction force on a surface. As I've shown above, it is not.

Perhaps the free body diagrams below will help. The top diagram shows an object and a frictionless surface. The bottom diagram shows the same but with a surface with friction. The diagrams show action-reaction pairs per Newton's 3rd law. There is no friction reaction force in the top diagram because there is no friction between the surfaces. The only reaction force at the surface is the normal force.

I have added two more diagrams to show an oblique applied force $F$, and labeled all the diagrams Figures 1-4.

Figure 3 is for a frictionless surface. It shows an oblique force $F$ applied to the mass $M$. The force $F$ is resolved into its x- and y- force components as shown. The y- component of the force adds to the downward weight of the mass and equals the normal reaction at the surface, for a net force of zero and no vertical acceleration.

Figure 4 shows the same situation as Figure 3, but now there is a static friction force opposes and equals the x- component of the applied force $F$ as long as $F_x$ does not exceed the maximum static friction force of $μ_{s}Mg$. So there is now a net force of zero in the x direction and the block does not accelerate. Note, however, that there is still the action-reaction pair of forces between $M$ and the source of $F$ per Newton's 3rd law. That doesn't matter if there is friction or not.

I'm afraid I don't have any more time to put into this, so I hope this finally helps. 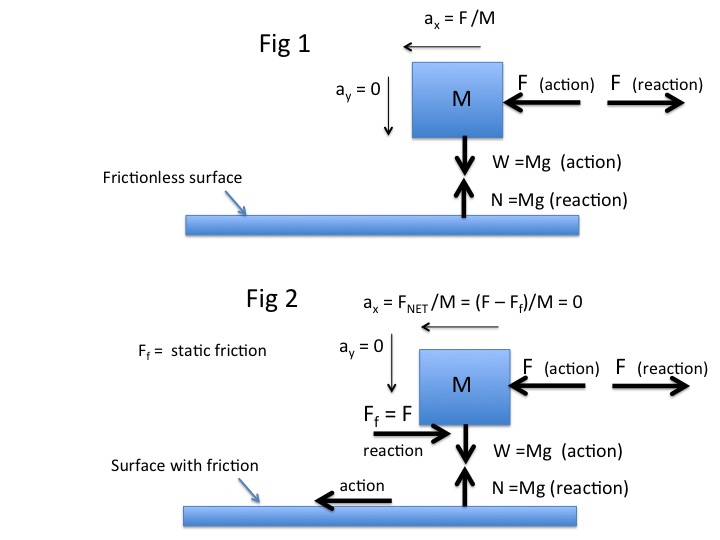 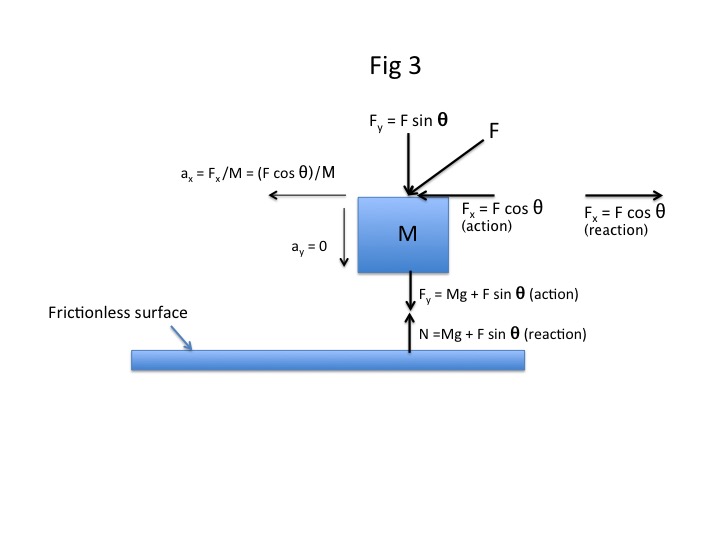 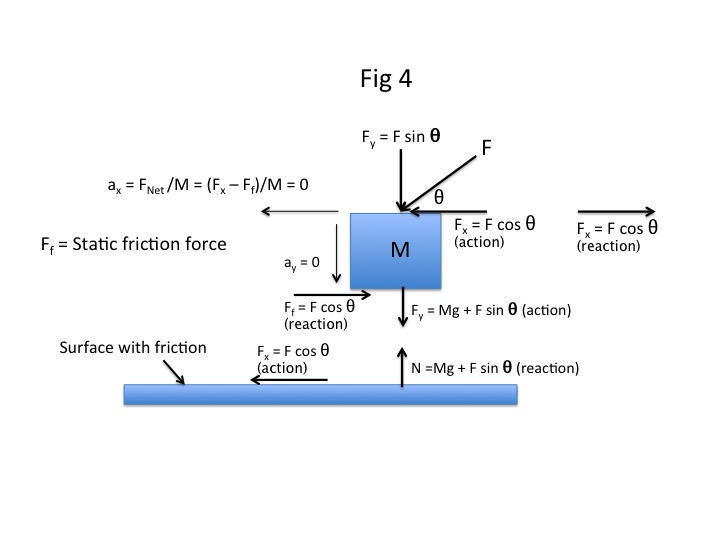 Well all forces exist in pairs, which is the original and which is the reaction is just a matter of naming really. But maybe this example will help a little, when you have a box on an incline, as you increase the inclination the friction force increases to match the component of the weight down the incline; so you can't really calculate friction independently until you reach maximum friction (whether limiting equillibrium or the object is moving). This happens because the irregularities of both surfaces on the molecular level interlocks, thus it is in a sense due to the summation of all the reaction forces between the irregularities.

I think your problem with the reaction force having one component is that you assume that an equillibrium is always possible which isn't true. If theoretically a frictionless surface exist and you apply a force that has a horizontal component, the reaction will be cancel out the force in the vertical direction only, and thus the object will have an acceleration in the horizontal direction.

5
Why does the friction act on the inward direction when a car makes a turn on a level road?
0
Why does frictional force cause a car to move? Also, is friction a reaction force?

18
Underdetermined forces in a statics problem
0
Which normal force for friction?
1
A broader view on contact forces
0
Tangential Contact forces between objects
2
Banking of road
0
Why is the normal reaction zero in this question?
1
Does a friction force act on a body on a flat surface with no external force?
2
Can the work by static friction on an object be negative?