I have a question about mass and energy and the Higgs field.

My understanding is that fermions 'gain' rest mass by interacting with the Higgs field. But mass is a form of energy, so is the rest mass in fact an interaction?

Likewise when two fermions interact (via say, Coulomb potential) they exchange a virtual photon, so is the virtual photon the interaction? Or am I mixing up the meaning of interaction and energy?

It's more of a mathematical tool rather than some physical interaction. To see what the maths is, we try and use the Higgs mechanism on a very simple case, which will be an abelian $U(1)$ gauge theory, and you will in the end see where the mass comes from.

Thus we have successfully incorporated mass into our gauge boson with the help of symmetry breaking using the Higgs mechanism.

Although this does not happen in our universe, what (probably) does happen is that the gauge symmetry of the electroweak force $SU(2)\times U(1)$ is spontaneously broken to give the gauge bosons of the weak force their mass (the photons remains massless due to $SU(2)_L\times U(1)_Y\to U(1)_Q$, i.e. electromagnetism is unbroken by the scalar vacuum expectation value). The fermions in an analogous (but non-trivial) fashion gets their mass from the mechanism.

You can see that nowhere above have we mentioned 'interaction' because the Higgs mechanism is not an interaction (although the public eats such words easily). The correct interpretation of an 'interaction' is as Anna has mentioned in her answer, so I won't elaborate on that.

The Higgs mechanism is not an interaction. It is a mathematical method of giving mass to the gauge bosons of electroweak theory, because in the laboratory, in contrast to the photon, they are massive.

To understand how this works beyond the popularized narrative, one has to study quantum field theory. The standard model of particle physics uses the mathematics of Quantum Field Theory (QFT) to describe existing data and (important) predict future data.

For every particle in the table , QFT posits that there exists a field that covers the whole space, from -infinity to +infinity. These fields are a context on which creation and annihilation operators act. This formalism is behind the Feynman diagrams that so successfully calculate the interactions of the elementary particles in the table. So an interaction means a Feynman diagram. The existence of the fields provide a context, like a coordinate system, on which the interactions of elementary particles with the SU(3)xSU(2)xU(1) form of the standard model take place.Example of Feynman diagrams:

These are a prescription one to one to integrals which calculated will give measurable quantities, as decay probabilitie and crossections. Interactions happen at the vertices , and as you can see there is no mention of a higgs field anywhere, or an electron or a neutrino or ... at that. The fields exist as a context to the diagram.

There is what is called the VEV of a field, the vacuum expectation value.

In quantum field theory the vacuum expectation value (also called condensate or simply VEV) of an operator is its average, expected value in the vacuum.

AFAIK the VEV of all the fields given by the particles in the table is zero, except for the Higgs which due to symmetry breaking is given as 246 GeV. Here is the mexican hat 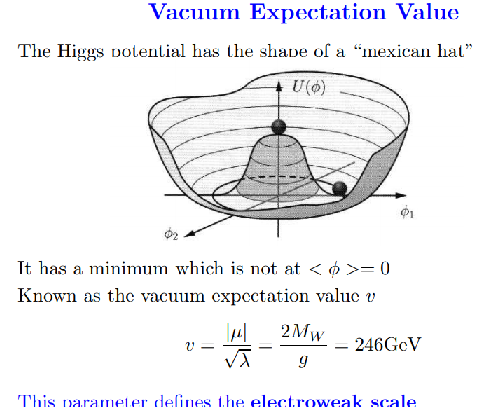 Not the answer you're looking for? Browse other questions tagged particle-physics mass standard-model higgs or ask your own question.

0
Why is the Higgs boson chargeless

3
How can coupling with the higgs field slow a particle down?
3
How to find the Higgs coupling with a mixing matrix?
2
What are the consequences in high-energy of the non-interaction of the Higgs Field?
2
What is the difference between the Higgs Boson particle and an electron moving through the Higgs field?
1
Does having inertial mass demand that the particle must have (Higgs and other) potential energy?
0
How do the right-handed fermions acquire mass?
0
Higgs field and interaction
0
Distribution of Mass through the Higgs Field
1
$W$, $Z$ bozons and fermions gained their masses WHEN?