Why don't atoms emit more than one photon during an energy level transition?

If you look at the emission spectrum of an atom, there are sharp lines corresponding to the different energy level transitions. That's because the single photon emitted during each transition carries the entire energy of the transition.

My question is: how does it happen that just a single photon carries all the energy? Why isn't the energy sometimes split among two or more photons?

Two-photon emission does exist, or else the 2s state of hydrogen would be stable. You can get a pretty decent estimate for this kind of rate without any fancy math or physics, just using the energy-time uncertainty principle. The typical rate of emission for a photon, when not forbidden by parity, is $R \sim 10^9\ \text{s}^{-1}$. We can think of the two-photon decay as an energy-nonconserving jump up to some higher-energy state, with the emission of a photon, followed by the emission of a second photon leading down to the ground state. The first jump can happen because of the energy-time uncertainty relation, which allows the electron to stay in the intermediate state for a time t ∼ h/E, which is on the order of $10^{−15}$ s. The probability for the second photon to be emitted within this time is $Rt$, so the rate for the whole two-photon process is $R^ 2 t \sim 10\ \text{s}^{-1}$. Considering the extremely crude nature of this calculation, the result is in good agreement with the observed rate of about $0.1\ \text{s}^{-1}$ for two-photon decay of the 2s state in hydrogen.

Two photon absorption is the absorption of two photons by a molecule to excite from ground state to excited state.

Two-photon absorption can lead to two-photon-excited fluorescence where the excited state produced by TPA decays by spontaneous emission to a lower energy state. 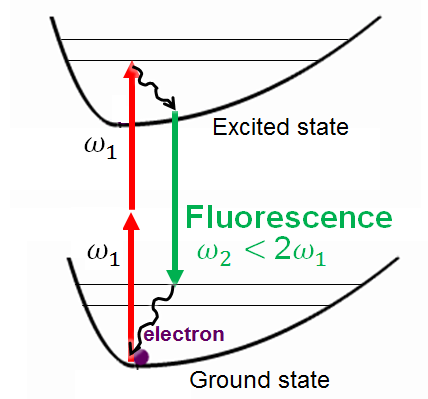 Now you are asking about two photon emission, and phosphorescence is a type of multi-photon emission, where the absorbed energy is released by the emission of multiple photons.

We report the first experimental observations of two-photon emission from semiconductors, to the best of our knowledge, and develop a corresponding theory for the room-temperature process. Spontaneous two-photon emission is demonstrated in optically-pumped bulk GaAs and in electrically-driven GaInP/AlGaInP quantum wells.

Not the answer you're looking for? Browse other questions tagged quantum-mechanics atomic-physics quantum-electrodynamics quantum-optics or ask your own question.

19
Stimulated Emission in QED
3
Photoelectric Effect, Why can't two quanta interact with an electron at the same time?
3
Is energy exchange quantized?

6
Is photon emission possible without electrons changing energy levels?
54
If photon energies are continuous and atomic energy levels are discrete, how can atoms absorb photons?
0
How far back can you trace a photon?
1
Having trouble understanding spectral lines
6
By what mechanism is a photon emitted or absorbed in atomic electron state transitions?
2
Why are some transitions in an atom preferred more than others?
0
Do selection rules apply only for radiative transitions or any other type of transition as well?
0
Stimulated emission interrupted by collisions
0
How are $R$ and $P$ branches defined in rovibrational transition?