Why is tension the same throughout a massless rope when the rope is curved?

The explanation I've seen and understand for why tension is the same in a massless rope is the following:

Let's say we have a vertical rope. Consider a segment of it.

Since this holds for any segment of rope, the tension must be constant throughout.

But consider the following configuration: 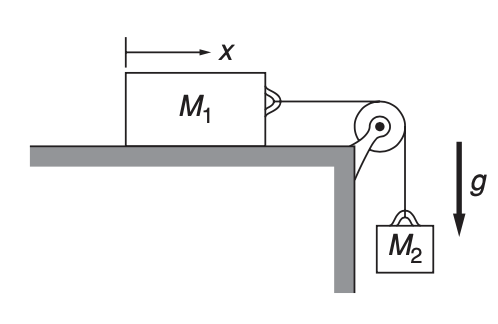 If we look at the point where the vertical section of rope starts to meet the pulley, we see that instead of being $$F_{up}$$ and $$F_{down}$$ its more like $$F_{up and to the left}$$ and $$F_{down}$$. In other words, the argument earlier is not applicable.

So how do you explain the tension in the section of the rope touching the pulley as being equal with the rest of the rope?

My current understanding: My understanding is that the definition of tension being equal at a point in a rope is that one half of the rope pulleys that point when equal MAGNITUDE of force as the other half. So lets say the magnitude of the force pointing downwards is A. If the magnitude of the force pointing upward is also A, there exists a solution for the F_pulley where F_pulley_x = Asin(theta) and F_pulley_y + Acos(theta) = 0 where theta is the angle between the vertical. 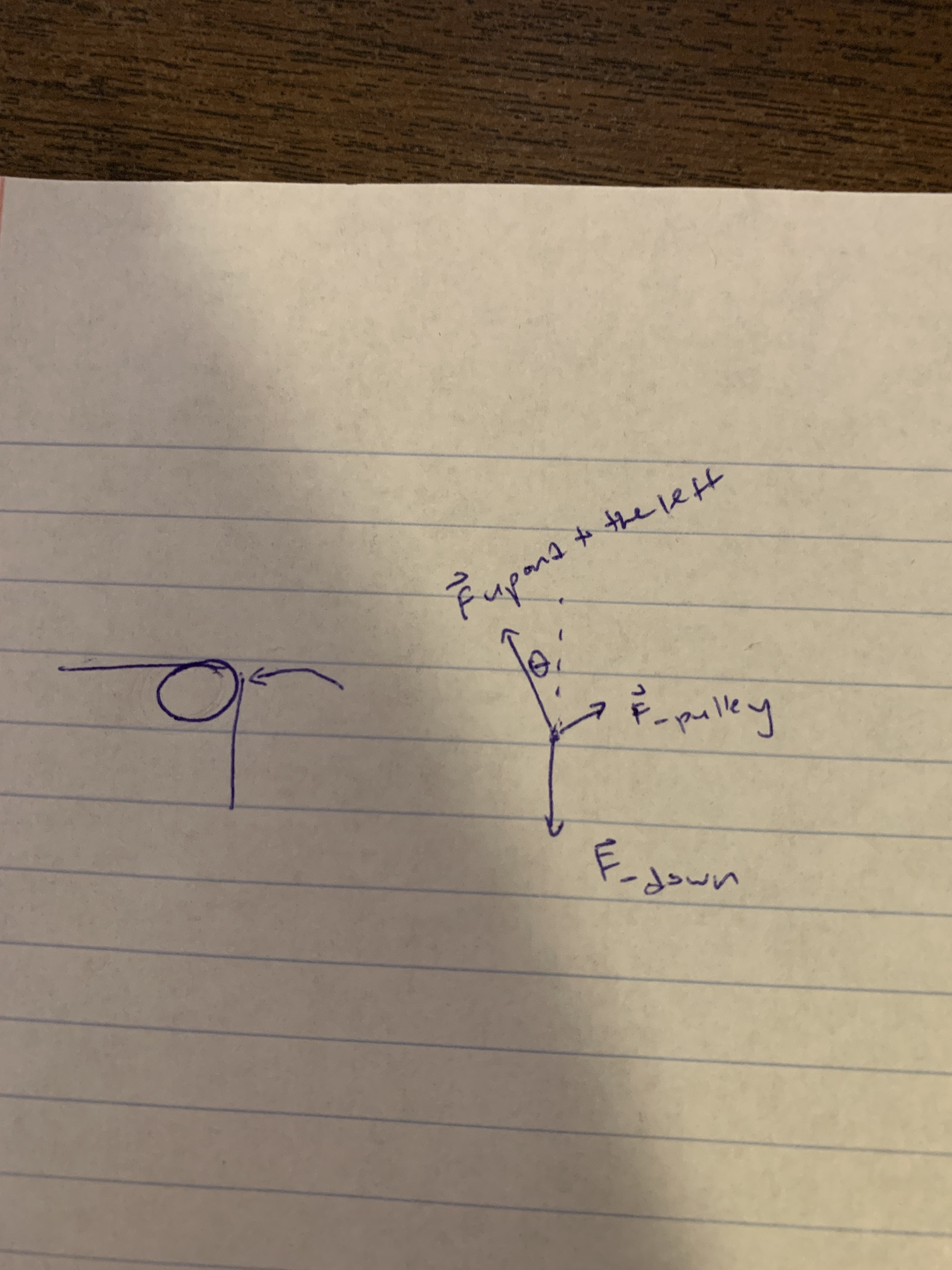 However, we assumed that the magnitude of the force pointing up and to the left was A. If we assume it to be a different value, say B, then we can also find a solution for F_pulley. Namely, F_pulley_x = Bsin(theta) and F_pulley_y + Bcos(theta) = 0.

So why must the magnitude be A?

Is your concern that Fupandtotheleft is no longer in the same direction as Fdown, or have you simply assumed that it's magnitude is not the same?

If the former, don't forget that there is also a force due to the reaction of the pulley.

Tension obviously is not the same throughout a massless rope.

Obviously, as almost always, everything depends on the external conditions. The basic rule is that Newton's laws have to be satisfied for every infinitesimal part of the string.

Here $\Delta\mathbf{ F}_{\text{ext}}$ is the external force acting on the infinitesimal element.

In this particular case, $\Delta \mathbf{F}_{\text{ext}}$ from the pulley is perpendicular to the string at every point, i.e. along $\mathbf{\hat{n}}$

resulting in the claim that tension is constant along the string.

If there is friction, tension can change exponentially even on a massless string!

Vivek's answer is correct and neat. I want to complement it with a slightly more realistic picture of the problem and pointing out why some approximations are made, in case this is what you're trying to understand better. I'll come to the tension towards the end.

If we consider a very thin segment of rope at the pulley and simplify in 2D, the situation of the surface forces exerted on the segment is roughly as illustrated in this picture: 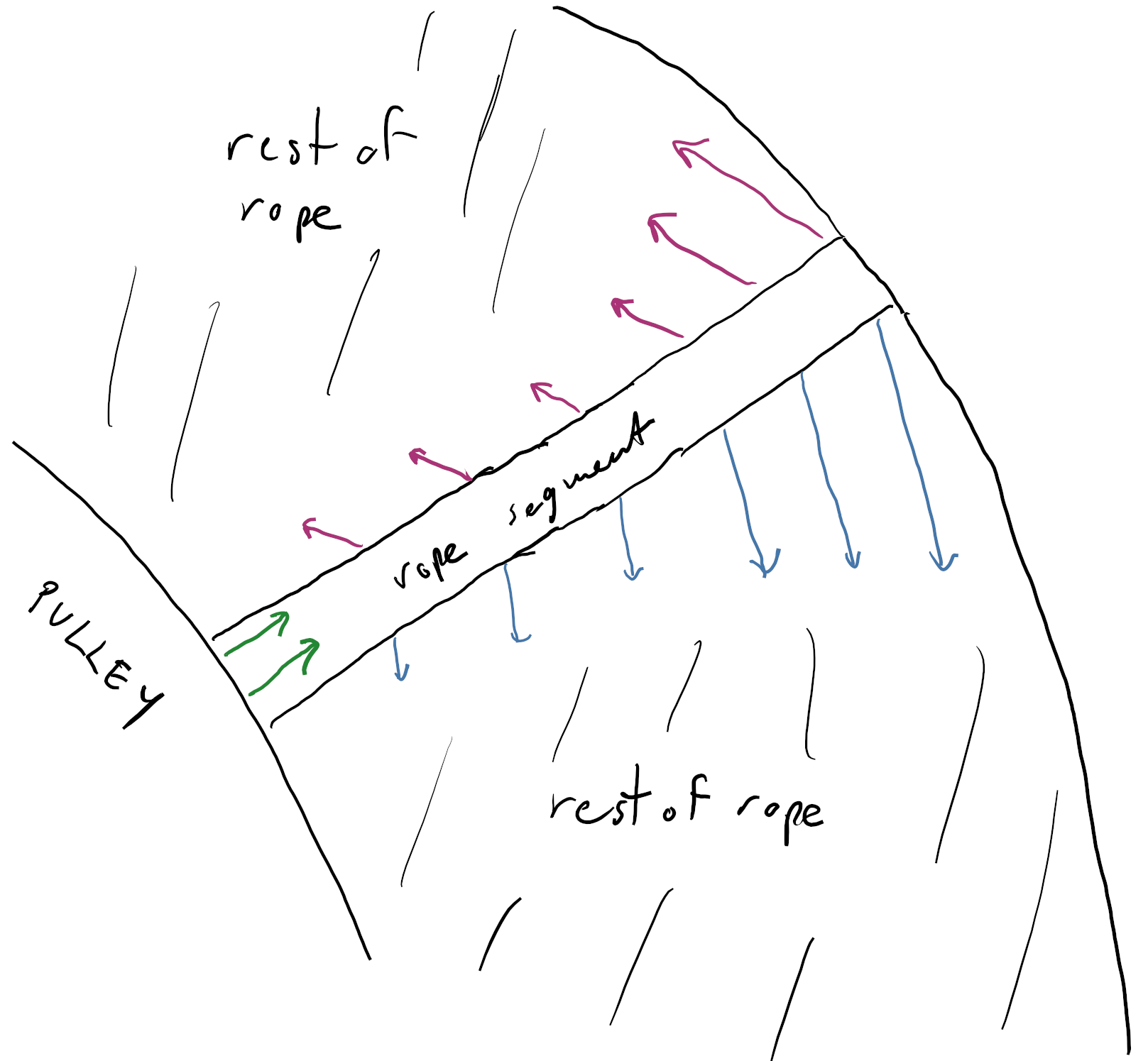 On the lower side – side 1 – we have a field of tensile surface forces. They're larger away from the pulley because the rope is more stretched there. (The picture may actually be slightly wrong in that the forces closer to the pulley maybe are compressive, directed inwards. But the general analysis below is still valid even in that case.) Moreover, they're not quite perpendicular to the surface, but have a tangential component directed towards the pulley, because the segment must be subjected to a slight shear as it turns around the pulley. Also, without this tangential component the rope would fly away from the pulley, as you can see in the equations below. I'm neglecting the force of gravity.

On the upper side – side 2 – we have another field of tensile surface forces, again larger away from the pulley, and slightly directed towards the pulley.

Let's skip the rotational motion of the segment and focus on its linear motion. Then, to calculate the acceleration of (the mass-centre of) the segment, we just need to vectorially sum all these forces, irrespectively of where they are applied. In view of this let me first sum the forces on each side separately, and decompose them according to the coordinates depicted in the picture below. Coordinate $x$ is meant to be tangential/"along" the axis of the rope, coordinate $y$ orthogonal to it: 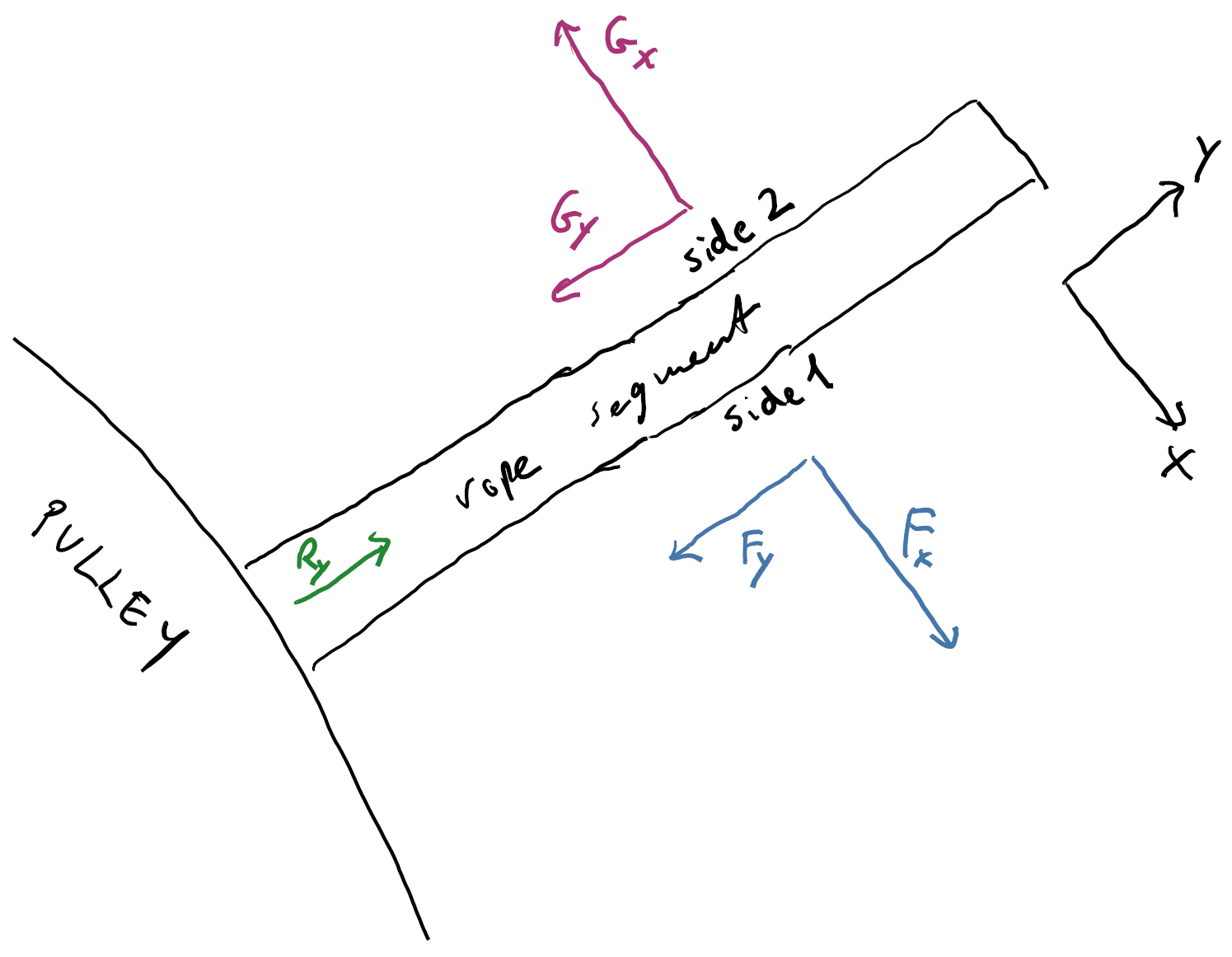 The approximate equations are for the total forces on the two sides.

If our final goal were to calculate the motion of the segment, it would be silly to make these approximations, of course, because we would make the balance of momentum indeterminate: $0\ a = 0$, without hope of finding $a$. But our goal is to find the motion of other larger masses involved in the problem, on which other forces act (gravity etc); and these other forces can be quite different from $F$ and $G$ above. Therefore a small difference between the magnitudes of $F$ and $G$ can be simply neglected in view of the bigger picture.

So, in the context of the bigger picture, we find that the normal components of the surface forces on sides 1 and 2 are approximately equal and opposite.

When we approximate the rope as a 1D string, we're neglecting the $y$ components of the stress, and the leftover $\tau_{xx}$ component is called the "tension". We thus find $$ \tau^{(2)}_{xx} \approx \tau^{(1)}_{xx}=F_x$$ or equivalently, dividing by the thickness $\Delta x$ of the segment, we find $\frac{\partial \tau_{xx}}{\partial x} \approx 0$, as derived in Vivek's answer. The tension is (approximately) constant throughout the rope. Note, however, that the cross-components of the stress $\tau_{xy}$ are not constant along the segments that touch the pulley (see below for the remaining segments); they express the fact that the rope-pulley system is "changing the direction of the force transmitted through the rope".

This approximation cannot be made if we have kilometres of rope, of course, because the small differences in the opposite surface forces add up to a non-negligible contribution to the bigger problem. This is equivalent to saying that the total mass of the rope becomes non-negligible.

The full analysis can reveal other details that are unimportant for the bigger problem. For example, if the segment touching the pulley is moving downwards, there must be a change in the direction of its velocity, towards $-y$. This means that we must have $a_y <0$ and therefore $R_y < - F_y - G_y$. The approximate analysis just made is also correct for horizontal or vertical segments of rope, away from the pulley. In that case we find that $a_y=0$ and $0=R_y=F_y =G_y$.

For further understanding you can check what happens if the pulley has friction, so that we must add a tangential force on the short side of the segment.

As the string is light and inextensible, the tension must be same at all places as the acceleration of all points on the rope must be the same, otherwise one point on the rope would move with a different velocity than the other and the rope would slacken/try to extend itself.

Tension in all segments the same (neglecting pulley friction), because Action = reaction, so 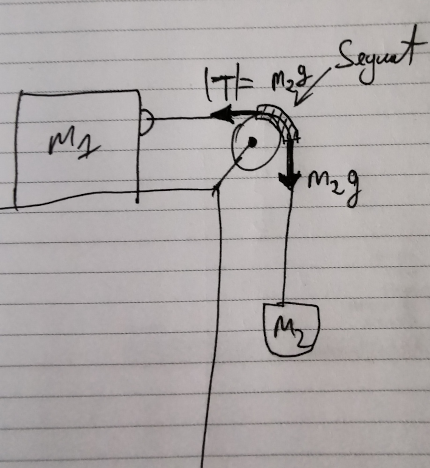 For the ideal pulley, we can assume the rope is coupled to the pulley by friction. The rope will not slip, but the pulley can turn.

So the top of the rope is given a force (exactly) of $F_{up}$ by the pulley. And the pulley also pulls on the other rope with a force of $F_{right}$.

The question then becomes whether or not the two forces on the pulley are equal. If the pulley is massless, or is not accelerating, then they must be equal.

We know the top of the vertical rope can't be given a force at an angle because there is no restoring force. If it were pulled at an angle, the rope must accelerate sideways. Since that doesn't happen, we know the only force from the pulley must be vertical.

So don't think of it as a single rope. Think of it as two separate ropes joined by the torques on the pulley. If the pulley has mass and the system is accelerating, the tension in the two rope segments can differ.

I suppose that there is no slip between string and pulley, and the mass of the pulley is negligible.

The forces that matter are along the string, because it is constrained to move only longitudinally.

In a small segment, where $q$ is length along the string: $F(q+\Delta q) - F(q) = b_f$, where $b_f$ is any longitudinally body forces in the segment, as weight components $\propto \Delta mg$ or acceleration $\Delta m\ddot q$.