How exactly do you avoid fooling yourself?

"Millikan measured the charge on an electron by an experiment with falling oil drops, and got an answer which we now know not to be quite right. It's a little bit off, because he had the incorrect value for the viscosity of air....Why didn't they discover that the new number was higher right away? It's a thing that scientists are ashamed of--this history--because it's apparent that people did things like this: When they got a number that was too high above Millikan's, they thought something must be wrong--and they would look for and find a reason why something might be wrong. When they got a number closer to Millikan's value they didn't look so hard. And so they eliminated the numbers that were too far off, and did other things like that. We've learned those tricks nowadays, and now we don't have that kind of a disease."

What tricks is he talking about specifically? In fact, in general, what tricks do physicists learn for doing experiments and avoiding fooling themselves?

Second: it's my strong belief that Feynman is referring to something here which isn't in textbooks but instead built into the culture of physics, but I don't understand what exactly it is, and I suspect it's passed along in the culture of physics labs. If someone can explain with some stories, examples or general comments, what is that culture like?

There are lots of different strategies that are employed by the scientific community to counteract the kind of behavior Feynman talks about, including:

My favorite story (which I learned about recently) is about Frank Dunnington and his measurements of electron properties in about 1930.

He was measuring the ratio $e/m_e$. Experiments took quite a long time (four years!). When the experimental device was constructed he asked the person who helped him to construct not to tell him some key attribute of the device. He asked: please make two slits here, the distance between them should be somewhere between 18 and 22 degrees. Although this distance was very important, he did not know it until all the experiments were finished.

When he was done with experiments he disassembled the device, measured the distance, put the actual value into formulas in his paper, and published it.

What Feynman is talking about is not particular to physicists, its particular to human nature and it is called "confirmation bias"

Confirmation bias is the tendency to search for, interpret, favor, and recall information in a way that affirms one's prior beliefs or hypotheses. It is a type of cognitive bias and a systematic error of inductive reasoning. People display this bias when they gather or remember information selectively, or when they interpret it in a biased way. The effect is stronger for desired outcomes, for emotionally charged issues, and for deeply-entrenched beliefs.

This is no longer happening as at the time of the electron measurements , because people have become aware of this bias generally. In addition , there exists in particle physics research the opposite bias, people looking for deviations of expected values and theories which would indicate new physics. A recent example is the faster than light neutrino which was finally shown to be a measurement error.

The Particle Data Group (PDG) which every other year summarizes the knowledge of Particle Physics prefixes their tome with the figure I include below (from the 2016 edition). It shows how our knowledge of a few select values evolves over time. You can see how some of the values jump at various points in time. That doesn't mean that nature suddenly changed, it is due to our measurements becoming more and more refined and (hopefully) correcting past mistakes. When the values change significantly sometimes the explanation is benign (say, the mass of a particle was measured relative to another particle for which a better measurement became available at that point in time), sometimes invalid assumptions in the measurement were corrected (say, a negligible quantity turned out to not be negligible), sometimes the effect described by Feynman will have played a role (perhaps mediated by another quantity which was used for calibration).

Not only because of my interest in this particle (please read my thesis), I find the most intriguing of these plots to be the one showing the mass of the $\eta(547)$ (second from bottom, leftmost column), one of the light mesons. Here a number of measurements up until 1990 fell into the same ballpark, but with a lot of tension (indicated by the green error bars which tell us that the PDG applied their scaling technique). Then around 1990 a new measurement appeared which shifted the mean value by several error bars and, after some experimental tension in the mid-noughts, the value jumped again to the now best value. Basically, the tension could twice only be resolved by much more precise experiments that shifted the central value significantly.

So it seems like even in the most fundamental measurements there can be a reluctance to change, but precision wins. 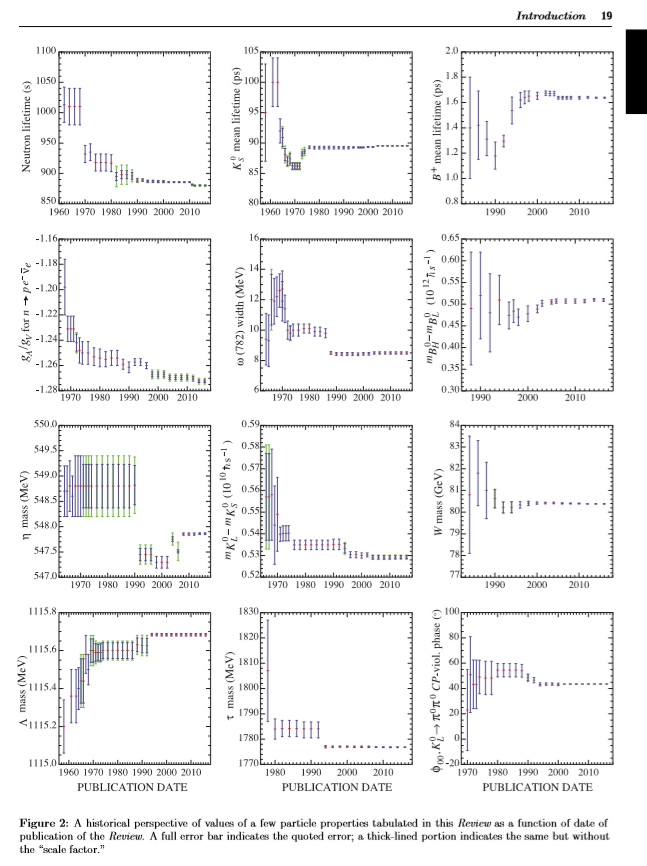 You then use "tricks" in exactly the opposite sense. Consequently, there is no such thing as what you request: "What tricks is he talking about specifically. In fact in general what tricks do Physics major learn for doing experiments and avoiding fooling yourselves." is explicitly describing an empty set of tricks.

There is a nice article from Robert MacCoun and Saul Perlmutter: "Blind analysis: Hide results to seek the truth". They suggest that one should use random numbers to

during the pre-data-analysis. The central idea of this approach is that we debug the programs for the data analysis, draw conclusion for the next steps of the data analysis, and analyse the influence of a possible outlier while we are still "blind folded" and thus unbiased. Only when one agrees that the data analysis is done, the random numbers are removed and the final results are investigated.

Not the answer you're looking for? Browse other questions tagged experimental-physics error-analysis data-analysis or ask your own question.

7
Oil drop experiment--How was the result so accurate?
1
Interpreting the results
0
Was the phase randomized in this particular CHSH test (M. A. Rowe and others)?
1
Understanding Millikan's oil-drop experiment
1
How did Eötvös measure gravity at sub 100 micron length scales by drilling holes in larger objects?
1
The critical point of gold -- how did they measure this?
168
How do you make more precise instruments while only using less precise instruments?
7
Help interpreting "five sigma" standard?