In Electroweak Interactions by Renton (page 407) there is the calculation of matrix elements for electromagnetic interactions/weak interactions involving nuclei: 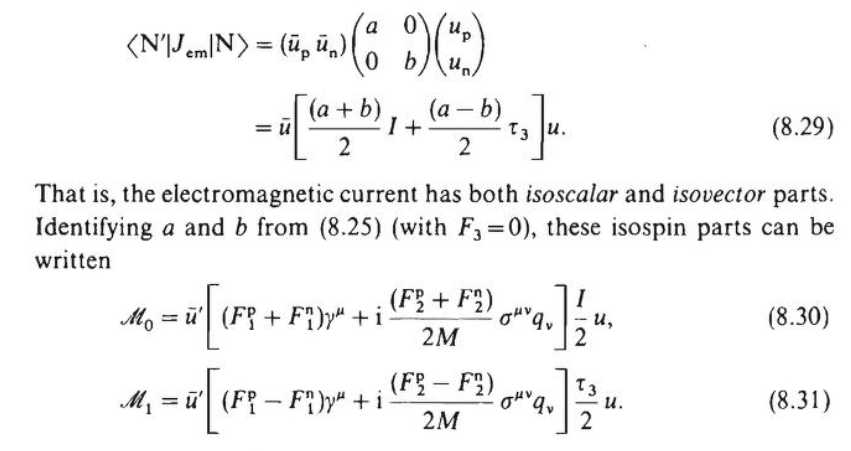 A point of confusion for me is the reference to 8.31 is an isovector part of the matrix element. $\tau_3$ is a 2x2 Pauli matrix, which forms part of the spin 1/2 representation of $SU(2)$.

I thought isovector would refer to matrix elements of the spin 1 representation, involving 3x3 matrices. Have I misunderstood the language or is there something else going on here?

You have built this isovector (triplet rep) out of two isospinors (doublet reps) u, which transform under su(2) via 2×2 generator matrices, like the ${\boldsymbol \tau}/2$. In turn, the isotriplet you have transforms under su(2) under 3×3 matrix generators ${\boldsymbol T}$, (thus obeying the same su(2) algebra!) essentially rotating a 3-vector infinitesimally. To see how rotating two isospinors by some angle amounts to precisely rotating an isovector by the very same angle explicitly see this answer: acting on both sides of Pauli matrices amounts to rotating their adjoint (triplet) indices by the Rodrigues formula--the sweet magic of group theory$^\dagger$.

Physicists summarize this composition of irreps by 2 ⊗ 2 = 3 ⊕ 1 , formally identical to adding two spin 1/2s to get a spin 1 and a spin 0. The triplet is the symmetric part of the product, enforced by the symmetry structure of the isospinors, whereas the singlet is the antisymmetric part, (e.g. $\bar u' u$. Here, you need consider the reversal of up and down components of the spinor with the telltale - sign, a feature of the conjugate rep of su(2)).

Not the answer you're looking for? Browse other questions tagged standard-model group-theory group-representations electroweak isospin-symmetry or ask your own question.